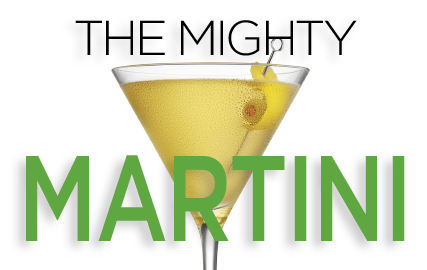 by KIRSTEN AMANN
January for many people is the season of restriction. New Year’s Resolutions, Dry January, diets, punishing workouts, and restraint in all its forms will be the main topic of water cooler conversations for the next 2-3 weeks. If that sounds like an absolute bore, I invite you to join me in raising a Martini this month. We’re celebrating, after all! It’s a celebration of simply existing. “The proper union of gin and vermouth is a great and sudden glory; it is one of the happiest marriages on earth, and one of the shortest lived,” wrote Pulitzer Prize-winning historian Bernard DeVoto. I, and generations of martini enthusiasts, agree: this simple drink reigns supreme in the pantheon of cocktails. “No other mixed drink, with the possible exception of punch, has inspired so many poems, so much prose, such a plethora of jokes and witticisms and iconic images,” writes David Wondrich in The Oxford Companion To Spirits & Cocktails. The drink is also absolutely polarizing, with much ink spilled about the “right way” to make a martini, and how wrong everyone else is about their preferences. Why not ring in the new year by jumping into the fray?

The beginning seems like a good place to start as we consider the Martini, exploring the who, where and when of its origin story. Unfortunately, like so many of the classics that we sip today, the Martini’s beginning is nebulous. What we do know is that the Martini emerged around the same time or shortly after its cousin, the Manhattan, in the 1880s. Wondrich calls these drinks siblings, but Robert Simonson, author of The Martini Cocktail: A Meditation on the World’s Greatest Drink, refers to them as “more frenemies than friends, forever vying for cocktail supremacy. The Manhattan had the initial edge but it didn’t keep it for long.”

Early recipes for the Martini are nothing like what you’d expect to see crossing the bartop today, especially if you came up drinking Martinis in the late 1990s served in 10-ounce conical stemware, absent vermouth and probably made of vodka. The Martinis of the 1880s were sweet, made with Old Tom gin or Genever, Italian vermouth, and often bitters, syrup and a cherry. Back then, one might even confuse the Manhattan for its frenemy/sibling the Martini. As Simonson explains, whiskey of that era was aged for less time and therefore lighter (owing to shorter barrel contact), while sweet or Italian vermouth then did not employ caramel coloring, making it also lighter hued. Conversely, Genever or Old Tom may have appeared gold-tinted or more opaque, while French vermouths then were amber, producing a cocktail that “would today look like a rather watery Manhattan.” Are the Manhattan and the Martini the same cocktail? Is your mind totally blown?

As for the name Martini, we’re not totally sure about those origins either. The town of Martinez in California lays claim to its invention, saying it was mixed on the spot to slake the thirst of a lucky miner who’d just struck gold, but nothing in that story checks out. I would be remiss not to mention the Martinez cocktail, which is adjacent to both the original Martini and Manhattan in structure, only made with Maraschino liqueur. Did that come first? Was it made in Martinez, CA? Who knows. Another tale links the drink’s moniker to a type of gun, the Martini-Henry rifle: “both gun and cocktail, it was frequently joked, possess a good deal of firepower,” writes Simonson, but that story appears to be bunk as well. The most likely origin for the name of this drink is a little boring: Martini & Solas (today known as Martini & Rossi) was the dominant vermouth brand of the time, and back then it was common to name a drink for a new and key ingredient. Over 100 years later, the late Rob Cooper would employ this same marketing technique when he launched his St-Germain elderflower liqueur in 2007: within a few years, the St-Germain Cocktail was ubiquitous, and named one of the most influential cocktails of the 2010s.

The Martini quickly became a staple of “club” drinking in the 1880s and 1890s which is, again, a far cry from the bottle service and shots amidst strobe lights we might think of as club drinking today. The term “clubman” back then “conjured up a sort of character recognizable to every citizen; privileged, upper crust, soft, sporty, dandyish, somewhat decadent,” writes Simonson. “A clubman belonged to posh clubs, the sort where to attain membership, you had to travel in the right circles or come from the right family.” So, if you feel fancy AF drinking a Martini, there’s a reason: it’s kind of in the Martini’s DNA.

As time marched on the Martini evolved, both in flavor profile and in natural habitat. “Between the 1880s and 1900, the drink evolved from a mix of Tom gin and Italian vermouth, with bitters, syrup, and a cherry, to Tom gin or the drier Plymouth or the even drier still London dry gin with French vermouth, orange bitters, and an olive,” writes David Wondrich. The drink received a boon during the speakeasy days of Prohibition, when Americans were drinking a lot of gin because it could be more easily bootlegged than whiskey. After Prohibition, the at-home “Martini Set” became extremely popular, bringing the cocktail hour into the living room nationwide: “Beginning in the 1930s, department stores and specialty stores began offering all sorts of ‘Martini Sets,’ which usually consisted of a decorative mixing glass or pitcher, a stirrer, two to eight glasses, and sometimes a tray,” writes Simonson. (If you remember nothing else from this story, I hope you’ll remember this: vintage Martini sets are all over eBay and make unique and fantastic gifts.)

Martini drinking in the 1950s and early 1960s is largely remembered as the domain of the hard-working and hard-drinking businessman iconically portrayed in Mad Men, who downed gin or vodka martinis during the 3-Martini Lunch, with increasingly less vermouth. On the other hand, this era also saw the proliferation of the Martini-on-the-Rocks (those hyphens are important), served just as the name says, with plenty of ice. “You may have witnessed your parents or grandparents enjoy the drink this way and thought it an anomaly,” writes Simonson. “It was not.”

Martini drinking fell out of favor in the 1970s but saw a resurgence in the 1980s. Was this the “greed is good” generation giving a nod to their Madison Avenue forebears of the 1950s? Or simply a new generation looking to take their drinks out of a cool glass? Either way, by the 1990s, the “Martini” was back, if in name only. By the late 1990s/early 2000s, menus had popped up from coast to coast with different types of “Martinis”, ranging from Cajun to Chocolate to Appletini. None of these bore much resemblance to their ancestors made with spirit, vermouth, and bitters, but truly everyone was drinking them.

My restaurant career began in this era, meaning I learned how to carry a tray full of those gargantuan, conical stems at a young age and retain that skill to this day. The fluorescent-hued concoctions ordered by the rank and file back then were cool to me as a young, not yet of legal drinking age waitress, but early on I developed a deep respect for the classic Martini drinker. These men and women always came correct with their specific Martini instructions, which seemed important to write down lest I serve them something subpar. The stakes felt higher somehow, and the victory sweeter when correctly executed. A few years later I would learn the origins of this Martini as I joined the cadre of nerdy cocktail enthusiasts excavating vintage cocktail recipes during the Cocktail Renaissance of the early aughts. I learned to appreciate vermouth and, importantly, how to properly store it, and even more importantly that it tastes delicious in a Martini. Who knew these drinks and their stories would be my destiny?

So, as the revelry of the holiday season dims in the rearview, in these cold early moments of the New Year, won’t you join me in sipping a martini? It still gets dark on the early side, and the Martini has long been the purview of a day completed, so I’ll suggest it for Happy Hour but wouldn’t begrudge a 3 Martini Lunch. Before long the Resolutioners will be back at the bar too, and an ice cold martini made exactly to their preferences is bound to make them feel most welcome. Specs for my go-to are below, but the most important rule of the Martini stands: your way is always right.

stir with ice. strain into a chilled vintage Martini glass.
garnish with a lemon peel and a cocktail olive