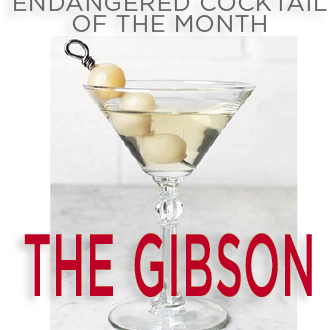 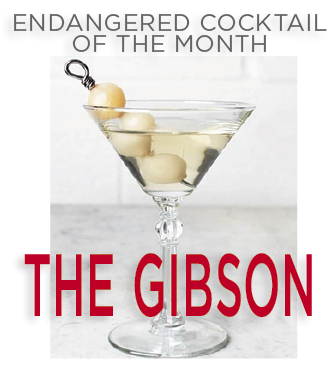 by PINK LADY
Surely you’ve tried a Martini and, depending on your proclivity for vintage drinks, perhaps you’ve also had its progenitor, the Martinez. But have you ever tried a Gibson? At first blush, there’s very little daylight between the Gibson and the drink we all know as the dry Martini. The earliest recipes simply omit the orange bitters you often see in vintage Dry Martini recipes and that’s about it. Back in the early 19OOs, cocktail onions were a common enough garnish for really any type of Martini, even the sweet ones. The onions would become de rigueur in a Gibson in the 192Os and 193Os and persist as its main signifier today.

The Gibson was first created at the Bohemian Club in San Francisco circa 1898 and is believed to have been named for either businessman Walter D.K. Gibson or for Charles Dana Gibson. According to descendants of the former, Walter D.K. Gibson, he believed eating the onions kept a head cold at bay. If you prefer the story about the latter, Charles Dana Gibson, the cocktail was riffed for him when he asked the bartender to improve on the Martini. While that request is a fool’s errand in my view, I do enjoy a Gibson with its oniony tang from time to time.

The Gibson was rarely ordered when I was a young waitress, and I was certainly a bit awed the first time I saw our bar manager root out the jar of cocktail onions that I never knew existed to make one for a guest. He produced the drink with such aplomb that I felt instantly left out of their urbane communique. “Who the hell puts an onion in a cocktail?” I thought, and then “there must be something I’m missing.” That latter hunch was correct, and a few years later I would go down many rabbit holes investigating things like the origins of the Gibson, and many similar stories. Little tidbits like these are what first set me on my path toward the study of vintage cocktails. Who knew a little cocktail onion would lead me to my destiny?

STIR the ingredients in a mixing glass with ice.
STRAIN into a chilled vintage cocktail glass.
GARNISH with a cocktail onion.