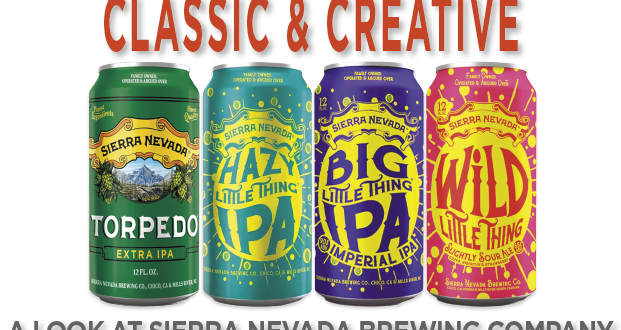 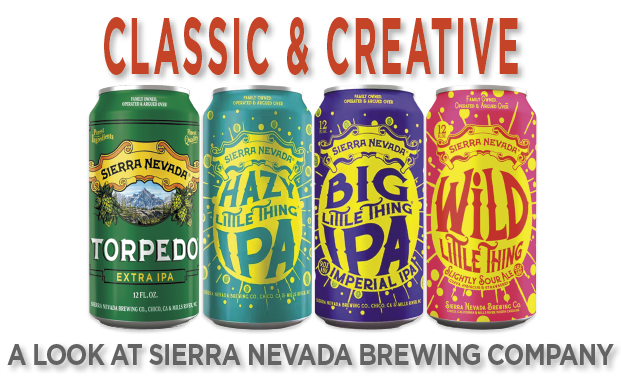 by ANDY CROUCH
For more than four decades, Sierra Nevada Brewing Company has been a pioneer and defining presence in the American craft beer scene, Founded by fellow homebrewers Ken Grossman and Paul Camusi in the college town of Chico, California, Sierra Nevada started small, scraping together money from friends and family to buy secondhand dairy equipment to start their brewery. The brewery grew quickly, fueled by sales of its style-setting classic, Sierra Nevada Pale Ale. Over the ensuing decades, the pale ale would continue to guide the brewery forward with steady growth. But Sierra Nevada has never been one to rest on its former achievements. Instead, it has long opted to develop new flavor profiles or quickly pivot and jump on emerging trends. Sierra Nevada’s agility is unusual for a brewery of its size. The brewery produces more than a million barrels of beer per year, making it the third largest craft brewery in America and one of the top 1O overall by production volume, on a list that includes Anheuser-Busch, MolsonCoors, and Heineken USA. In recent years, Sierra Nevada has released hit after hit, including its popular Little Thing and Torpedo series. Let’s take a look at its core and popular lineup.

TORPEDO EXTRA IPA alcohol by volume 7.2%
Sierra Nevada has long been a top producer of hop forward beers, dating back to when its flagship Pale Ale caused many first-time craft beer drinkers to make the bitter beer face after imbibing their initial sip of the hoppy beer. Fast forward three decades from its launch, and sales of Sierra Nevada’s Pale Ale began to flag as the American craft beer palate shifted its tolerance level of hops and bitterness. Sierra Nevada responded not by trying to go down fighting for Pale Ale but by recognizing the changing trends and choosing a path of evolution and innovation. One of the first salvos was the release of the delightfully hoppy Torpedo Extra IPA. The deep orange amber presentation asserts a wheat tinted head and starts with a slightly resiny and assertive hop assault on the nose, with a lush base of caramel malt. From the first sip, you know this is no weak-kneed pale ale. Its sharp hoppiness, however, is so well balanced by the underlying malt flavors as to render it famously drinkable and deserving of a place within the pantheon of great India Pale Ales.
HAZY LITTLE THING IPA alcohol by volume 6.7%
When beer drinkers started to eschew bitterness in the era of hazy, juicy New England style India Pale Ales, Sierra Nevada once again responded, this time with the first release in what would become its own popular sub-brand: Hazy Little Thing IPA. Pouring with a deep orange and indeed hazy character, the aroma fills with notes of orange, tangerines, and pine along with some mild bready malt notes. The flavor follows with a relatively easy dose of fruit flavor over mild, soft malt notes, all in a medium and at times creamy body. A reliable hazy IPA if a bit muted compared to many others in the style, the Hazy Little Thing is a solid go to offering for those seeking a foot in the door of the haze craze but without all the work and expense.

BIG LITTLE THING IMPERIAL IPA
alcohol by volume 9%
The big brother to Hazy Little Thing, Big Little Thing is Sierra Nevada’s answer to the renewed Double India Pale Ale movement of recent years. Weighing in at 9-percent alcohol by volume, Big Little Thing is a well-designed and full-bodied bruiser that acts more like a gentle giant. Sierra Nevada’s brewers have a way with and respect for malt and this DIPA is no different. The beer pours with a fairly clear off-golden hue and a solid dollop of off-white foam that sustains well and laces throughout. The aroma fills with a substantial wave after wave of citrus notes, including grapefruit, orange, and more tropical offerings, such as mango. Sierra Nevada uses Magnum, Crystal, Chinook, Idaho 7, Columbus, Cascade, and Mosaic hops in Big Little. There are also occasional notes of toast and biscuity malts and some mild sweetness.

The flavor begins with small notes of biscuit and caramel malts and a little residual sweetness that quickly gives way to big citrus and tropical notes over a reasonable and balancing amount of slightly earthy bitterness. Carbonation levels are moderate and the finish is crisp and relatively dry. Easy drinking, well balanced, and great at hiding its high alcohol level, Big Little Thing strikes the right chords and is an excellent offering for those interested in trying a stronger IPA.

WILD LITTLE THING ALE alcohol by volume 5.5%
In response to the growing trend of sour and tart beers, especially produced by way of the kettle souring method, Sierra Nevada released the slightly sour Wild Little Thing ale in March 2O2O. Breweries employ kettle souring, which involves taking an unfermented and unhopped beer (called wort), boiling it, and then cooling it with the addition of lactobacillus. This bacteria transforms sugar in the wort into lactic acid, resulting in a decided yet pleasant sourness. Sierra Nevada’s brewers then blend this wort back into the standard Wild Little Thing ale to achieve the desired level of tartness. This process substantially reduces the amount of time required to achieve tart and sour characters that would otherwise be achieved through barrel aging.

Wild Little Thing pours with a big, bright pinkish-red hue and a big vibrant off-white head. The color is striking and inviting and lets you know that some fruit is to be expected. If there was any confusion about the fruit, the aroma sets you straight with notes of strawberry and raspberry, bordering on candy-like but without the accompanying sweetness. The first notes are strawberry, cherry, and some blueberry and the underlying sour and tart notes are pretty muted, especially when compared to other kettle soured beers, which can sometimes be mouth puckering and undrinkable. The finish is light and dry and Wild Little Thing is a very approachable entrant into the world of sour or tart beers.