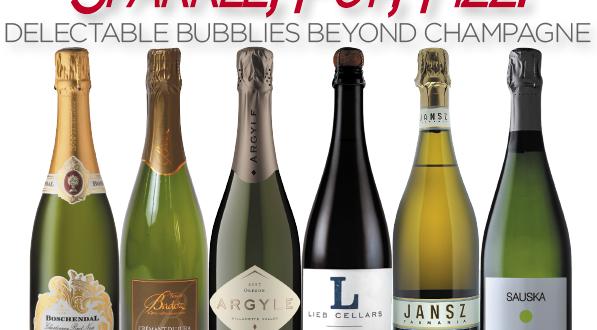 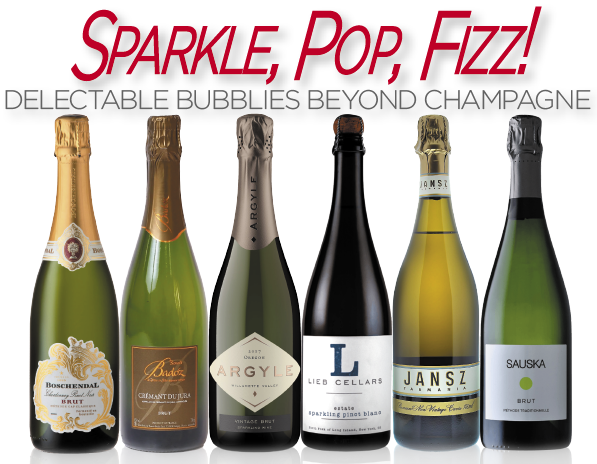 By Sima Tikare
Whether the idea is to celebrate often and at great length or exceptionally and elaborately, it is always nice to have choices. One can never go wrong with Champagne ­— from the most popular names like Veuve Cliquot to the more obscure and cult favorites like Egly-Ouriet, Champagne can brighten any party. However, the price tag can be hefty and become prohibitive for multiple bottles. Fortunately, there is much more to the world of sparkling wines than expensive Champagne. In the past few years, the world of sparkling wines has become a wonderland of extremely well-made, tasty, and affordable bubbles.

Champagne is of course from the area of France known as Champagne, where the vintners use the “traditional method.” The traditional method involves several steps. First, one must make a tart, relatively low alcohol still wine because the sugar is added during later processes, raising the level of alcohol in each bottle. This still wine is then put into the final bottle in which it will be sold, along with the “liqueur de tirage,” a combination of yeast and sugar, and then crown-capped to allow a second fermentation. This second fermentation, done under a closed cap, allows the carbon dioxide, which is a by-product of the fermentation process, to dissolve into the wine, giving it its “sparkle.” The bottle is then allowed to rest on the lees for varying amounts of time — the minimum for most wines outside of Champagne is 9 months — but many winemakers allow the wine to age for 3 or even more years. The longer the wine is allowed to remain on the lees, the more yeasty, pastry aromas are incorporated into the wine.

Once the wine has aged to the degree the winemakers prefer, the bottle is “riddled,” or slowly turned upside down to allow the yeast sediments to collect in the neck of the bottle. This process can be done by hand in wooden peg boards taking weeks, or by machine, which takes hours. Once the yeast is collected in the top of the bottle, the neck is submerged in a bath of freezing saline water to create a frozen plug from the sediments. This plug is then disgorged — the pressure inside the bottle is so great that it will eject the plug – then some reserve wine is added, and depending on the style desired, some sugar (brut for example contains between 6 and 12 grams of sugar per liter. The bottle is then corked and caged for final resting and sale. The pressure inside the bottle at the time of sale is 6 to 7 atmospheres of pressure.

It is incredibly expensive and time-consuming to make traditional method wines. One of the reasons people pay a premium for it is the resulting fineness of the bubbles, the length of time it stays fizzy, and the complexity of flavors added during the aging process. The wines are almost always labeled “traditional method” or “méthode traditionelle” but also come with other names, such as Crémant (méthode traditionelle from all other wine regions of France), Cap Classique (South Africa), and Metodo Tradizionale (Italy, such as Franciacorta, TrentoDOC, and Alta Langa).

Prosecco, by contrast, is made with the Charmat or Martinotti method, in which the still base wine is put into large, pressurized tanks, fermented with added sugar and then immediately bottled under pressure. It is pressurized to around 3 atmospheres of pressure, so the bubbles are larger and dissipate more quickly. It is a quick, easy process that requires no aging and can come to the market almost immediately, substantially reducing the cost to the producer. There are many other sparkling wines that also employ the Charmat method that are certainly worth a try.

BOSCHENDAL BRUT, WESTERN CAPE, SOUTH AFRICA
The sparkling wines of South Africa are a hidden gem. Called Méthode Cap Classique, these wines are crisp yet creamy, clean and complex as any Champagne. While a relative newcomer to the international market, the wines of South Africa have a history dating back 5OO years to the Dutch East India Company. And over the centuries the vintners there have identified the best terroir for these traditional method wines. The bubbles for the Boschendal are smooth and soft on the opening with flavors of lemon and almonds, followed by a crisp mineral finish. 58% Chardonnay, 41% Pinot Noir, 1% Pinotage. Available from Carolina Wine & Spirits.

DOMAINE BENOIT BADOZ BRUT,
CRÉMANT DE JURA, JURA, FRANCE
There is no getting around the fact that I have been obsessed with sparkling wines from the Jura Mountains for a while now. This wine, made with a classic blend of champagne grapes, is simply stellar. The Benoit Family has been making these wines for 1O generations, since 1659, but they are also modern masters. Replanted for high-quality vines in 197O, this wine combines low sulfites and natural yeasts with traditional techniques to make a very pretty sparkler. The aromas are crystalline, with lovely citrus from lime to sweet orange leading to flavors of green apple and fresh buttered toast. This is the type of wine you would take to impress the in-laws during the holidays. 8O% Chardonnay, 2O% Pinot Noir. Available from MS Walker.

ARGYLE GROWER SERIES 2O17 VINTAGE BRUT, WILLAMETTE VALLEY, OREGON, USA
In a blind tasting, I doubt most people could distinguish this brilliant Oregon sparkling wine from a Champagne. The founding winemaker came to Oregon in the 198Os because vintners were beginning to realize the value of the soils and climate of the Willamette Valley — protected from the cool Pacific rains by the coastal range but having gaps that allow the cooling winds in the heat of the summer. Good elevation and rich, volcanic soils sealed the deal. In fact, it is the volcanic soils of the Dundee Hills and the Eola-Amity Hills which contribute elegance and balance to this lovely wine. Silky smooth minerality and lemony freshness on the open lead to a palate that is redolent of green apple and almonds, and then a finish that hints of sweet pastry. That combination makes this wine supple, subtle and totally drinkable. 52% Chardonnay, 43% Pinot Noir, 5% Pinot Meunier. Available from Carolina Wine & Spirits.

LIEB CELLARS SPARKLING PINOT BLANC,
NORTH FORK, LONG ISLAND, NEW YORK, USA
I had to do a double-take when I tasted this wine. Made in the traditional method with Pinot Blanc, it is delicious. Chardonnay sparklers can be lean and linear but this one is downright plush, while still having familiar characteristics of lemon, cream, brioche, and almonds. Not only is it a surprise for being a blanc de blancs of Pinot Blanc, but it is also from Long Island. The winemaker is very comfortingly nerdy with specific information about yeasts and methods and so forth — I was so happy talking to him and tasting this masterpiece. 1OO% Pinot Blanc. Available from Ruby Wines.

JANSZ TASMANIA PREMIUM CUVÉE,
TASMANIA, AUSTRALIA
Between 41 and 44 degrees latitude south, Tasmania is not as far from the equator as Champagne, which lies at 48 degrees north, but is surrounded by the cool currents of the great Southern Ocean. Australia’s most southerly wine region, the climate in Tasmania turns out to be ideal for growing Chardonnay and Pinot Noir and for making traditional method wines. Jansz began as a partnership between Louis Roederer Champagnes and the local owners of Heemskerk Wines but was purchased by the Hill-Smith family in 1997. Since then, they have burnished their reputation as some of the most accomplished sparkling wine makers in Australia. Today both the viticulturist and winemaker are women who are totally dedicated to the entire process from vine to wine, with the results being spectacular. The fine mousse and the lovely fresh nose lead to a lemony palate with slight hints of fresh strawberries.  The finish is creamy yet crisp, leaving a nice yeasty flavor behind. 66% Chardonnay, 34% Pinot Noir. Available from MS Walker.

SAUSKA BRUT METHODE TRADITIONELLE,
TOKAJ, HUNGARY
Few things make my heart flutter like tasting a totally new variety of sparkling wine from a totally new place. I am not even sure I need say more than “Try it! It is delicious!” But this wine deserves to be lauded a bit. The grapes are estate grown after meticulous analysis of soils and replanting of the vineyards. The winemaking is equally careful and exacting, with the bottles even being hand riddled. Finally, the cellars are dug from living limestone, as are many northern French cellars. Except for the varietals used, there is little to distinguish these wines from grower Champagne – until you see the price. The wine is crisp and bright with loads of lemon and green apple. The bubbles fizz on the palate which enhances the freshness of the grapes. Blend of Furmint, Chardonnay, Hárslevelú. Available from Ruby Wines.