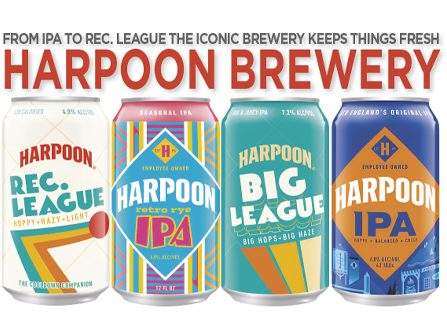 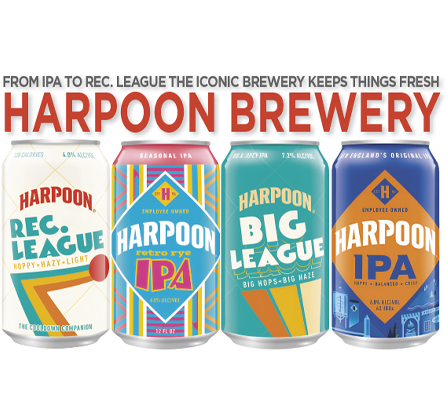 by ANDY CROUCH
For more than 35 years, the Harpoon Brewery in Boston has been a pioneer in American craft beer. Out of the gate, Harpoon launched with its original Harpoon Ale, a lovely malty ale with just the right balance of hop bitterness and flavor. But it wasn’t until 1993 that the brewery discovered its path forward with the release of its signature India Pale Ale. Harpoon IPA was a reasonably aggressive IPA at the time of its release, especially for the East Coast, which tended towards less hoppy and more malty beers. In New England, many brewers focused on English styles, with malt always playing a bigger role than hops for several decades. Harpoon IPA signaled one of the early moves away from that traditional flavor palate. It went from a one-off seasonal beer to become the brewery’s best seller and flagship, helping define them for a generation of beer drinkers. Harpoon remained one of those breweries whose flagship remained core to the company, at a time when many if not most other breweries had to pivot to new brands at least once. Eventually, even Harpoon recognized that its signature IPA and portfolio had to evolve with the times.

In early 2019, Harpoon adventurously tried to kill two birds with one stone with the release of Rec. League. This tiny but flavorful session beer weighed in at 3.8 percent alcohol by volume and was designed to satisfy both the hazy IPA crowd and the active lifestyle audience. Brewed with buckwheat kasha, chia seeds, and Mediterranean sea salt, Rec. League sought an athletic audience previously served by beers such as Michelob Ultra while also delivering a solid punch of flavor. “Fans of Harpoon do more than drink beer – they’re running road races, working out with friends, and hitting the slopes. We wanted to make a beer that celebrates and complements this active lifestyle,” said Tom Graham, Innovation Brewer at Harpoon Brewery at the time of the beer’s release.

And the beer became a hit, even with jaded beer lovers such as me. Encased in a fun, retro looking can and with the throwback reference name of Rec. League, the hazy pale ale has been bumped up to 4 percent alcohol beer and comes in at 120 calories per 12 ounce can. It pours with a solid white head of thick foam and a beautiful, luminous hazy amber-orange body. The aroma fills with a surprisingly strong blast of citrus and tropical hops (Cascade, Mosaic, Simcoe, Ekuanot, and Citra) mixed with straight juice and a light dry note. For a session beer on the lower side of the American alcohol spectrum, Rec. League understandably tastes a toucher thinner than fuller bodied and alcohol laden IPAs but not distractingly so. The first sips bring quick light waves of tropical fruit notes, short hints of sweeter pale malts, before finishing very dry, almost compelling another quick sip for refreshment. With 35 IBUs, Rec. League avoids the cloying fate of many hazy IPAs all while remaining aromatic and satisfying to the taste.

IPA has long defined Harpoon’s reputation and with the success of Rec. League, the brewery retooled its lineup to focus more heavily on the popular style. Named after two of Harpoon’s founders Rich Doyle and Dan Kenary, “Rich and Dan’s Rye IPA” has recently been re-released as Retro Rye IPA. Doyle sold his interest in the company in 2014 and left to pursue other avenues in the beer industry, certainly one reason to rename the beer. Harpoon also retooled the beer for a more modern look, utilizing traditional hops such as Centennial, Mosaic, and Simcoe, and adding the newer Yakima Chief Cryo Pop® Blend.

Retro Rye pours with a golden-amber hue with haziness and a solid layer of white foam that laces throughout. The aroma starts with a decent bit of spiciness that sets it apart from your average hazy IPA before settling into a mixture of pineapple and citrus fruits over some light toastiness and rye bread characters. There are some softer, sweeter notes but it’s largely a show for the tropical fruits in the hops and yeast. The body is medium and the flavor reveals more of the rye character, with a light but present breadiness and spice note over herbal qualities. The IPA jolts come through in bursts of pine and fruit, with hints of mango, berries, and orange. Crisp in the finish and finishing a bit dry, there is a light bitterness that helps maintain structure through to the end.

With the success of Rec. League, Harpoon decided to listen to fans and unleash its big brother, appropriately called Big League. Harpoon views Rec. League as its cool, easy drinking low alcohol offering while Big League is an amped up sibling. It is also brewed with Buckwheat Kasha, Chia Seed, and Mediterranean Sea Salt, and Big League features Cascade, Simcoe, Ekuanot, Citra, and Mosaic hops. Pouring with a deep and layered lightly hazy burnished orange hue that cascades to a lighter golden in certain lighting, Big League is a looker. The aroma captures the higher alcohol juicy IPA style, with notes of mango, lemon zest, papaya, and orange without revealing much in the way of alcohol heat, despite weighing in at 7.2 percent. The flavor is ever juicy, appropriate to style, with waves of pineapple and grapefruit over a light cracker like malt character. Soft on the palate, there is a light sweetness mixed in with the juicy notes. A little hop bitterness is available for balance and the beer finishes reasonably crisp. Much like its younger, less boozy sibling, Big League remains surprisingly easy to drink and the alcohol can creep up on you without much warning.

And do not forget the original. If it has been a while, Harpoon IPA deserves a return look. The packaging is updated and remains sharp and the beer itself is not the time travel back to the sad age of New England IPA that some might think. Instead, Harpoon IPA is a return to a slight bitterness adventure, something often lacking in most IPAs these days. The aroma is full of old school hops, including Chinook and Cascade, as well as some light caramel malt and biscuity notes. The flavor is where the beer shines, with bits of citrus (but not juicy) and a pleasant and lingering bitterness that starts early and continues throughout. This American take on the English IPA remains a well-balanced classic.