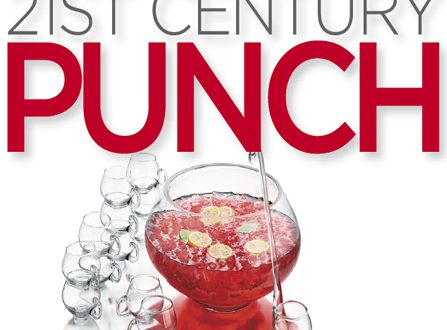 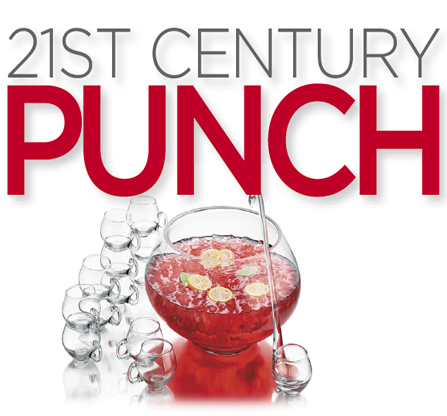 By Kirsten Amann
Nothing says “let’s party” like a big bowl of punch! To the uninitiated, or if you came of age in the 7Os, 8Os, or 9Os, punch might be something you’d expect to find at a bridal shower or Tupperware party, involving a carton of sherbet spiked with liquor and melting into some sort of bubbly (hopefully sparkling wine, possibly ginger ale.) But did you know that the flowing bowl was once the drink of choice in the American bar room? In fact, punch reigned supreme for 2OO years, long before the invention of Tupperware, freezers or even weddings as we know them today. Here’s a brief look at the origin story of punch, and a case for why we should bring this vintage recipe template into the 21st century.

A PUNCH ORIGIN STORY Like so many drinks in the pantheon of historic beverages, the origin story of punch is a hazy unknown. It’s not for lack of trying: Cocktail historian David Wondrich’s 2O1O book Punch: The Delights and Dangers of the Flowing Bowl takes a fascinating jaunt through the spice routes of the English East India company, the West Indies and the American colonies in an effort to suss out the provenance of this mighty tipple. Spoiler alert: we just don’t know who mixed it up first.

Punch debuts in the 16OOs in written accounts of explorers traveling across India as they encountered traders (called “factors”) from the English East India Company: “By 1632,” Wondrich writes, “the company had factories [trading posts] dotted up and down India’s southeast and northwest coasts.” A German adventurer in Surat, Johan Albert de Madelslo, describes a group of factors “irrigating themselves with ‘a kind of drink consisting of aqua vitae, rose-water, juice of citrons and sugar,’” writes Wondrich. The drink was dubbed Palepuntz (bowl of Punch.) Eleven years later when French traveler François de La Boullaye-Le Gouz came through, he found the factors still at it, sipping a similar concoction described as “bolleponge” (Translation? You guessed it, bowl of punch.)

For a while in the aughts, drinks writers like myself were content to believe that punch was born there in India among the factors. The Hindi word for five is “panj” (phonetically “panch” which to the English-speaking ear sounds “punch”) and the drink typically contains five elements: Spirits, sugar, water, citrus, and spice. But, as with most too-tidy origin stories, this one has some holes: “the real problem for the claim that punch is an Indian creation is the dearth of actual seventeenth-century evidence of the native peoples of the region drinking the stuff,” writes Wondrich. There is, on the other hand, a preponderance of evidence that British folks were drinking it.

It is possible that punch is an English drink born in the east on the high seas, out of necessity. British ships back then were famously victualed with copious beer, wine, cider and spirits: on the first East India company trading mission in 16O1, these rations took up 42O of the four ships’ total 1,16O tonnage. The longer the trip, the greater the possibility for spoilage, which was an issue for everything but the spirits. In addition to alcoholic beverages, citrus fruit could be found on board and replenished heartily along on the routes, as it was indispensable in preventing the fatal wasting disease, scurvy: “In the age of sail, it was a great killer,” writes Wondrich, with ships losing “half their crews to it or more.” They also carried plenty of sugar, and as for spices, well, that’s why the East India Company was there in the first place. Could the space-saving, spoilage, and scurvy concerns that gave us drinks like IPA, madeira, and the Gimlet, be the real progenitors of punch? We may never know.

THE CASE FOR COMMUNAL DRINKING It’s been almost two years since the coronavirus upended how we socialize, and after so much time spent drinking alone or with Zoom as our virtual bar, it’s hard to fathom the 18th century tradition of gathering around a bowl of punch. First, building a punch is about as analog as it gets in terms of tools, technique, and mixology. Second, gathering with a group around the flowing bowl inside in the winter in a warm bar is the opposite of social distancing. Finally, letting the bartender choose not just what you’ll drink, but what the entire group will have? If the past two years have taught us anything, it’s that American individualism is alive and well, and we don’t really like being told what to do — or drink.

But punch drinking predates American independence and gathering around a bowl of punch to see it through to the end was once how we did it. Across the pond in England, punch was something of a status drink in fashionable coffee houses, but in the American colonies, no one was of the “highest sort” and subsequently everyone drank punch, writes Wondrich: “The Spanish had conveniently planted the islands of the Caribbean with sugar cane and citrus trees, so there was no dearth of raw materials with which to work. And there was plenty of motivation in the form of lousy beer . . . and expensive wine.” Punch was consumed by folks on every rung of the social ladder, and as the ordinary, publick house, and tavern were at the heart of American colonial life, so was the flowing bowl.

As the 18th century wore into the 19th, punch would eventually fall out of favor in the newly independent republic, but not before it could add its galvanizing dose of courage to the fight for American independence. Paul Revere is best remembered for his famous ride, but in his day he was an accomplished silversmith and member of the Sons of Liberty, a grassroots group of colonial provocateurs known for extreme civil disobedience (and yes, violence.) They held their meetings at the Green Dragon Tavern in Boston, described by Iain Gately in Drink: A Cultural History of Alcohol as a “nursery for revolutionaries. The Sons of Liberty who gathered in this room refreshed themselves and inspired their defiance with a specially commissioned punch bowl, made by the silversmith and engraver, Paul Revere.” The exquisite bowl is engraved with each of their names, and you can visit it today at the Museum of Fine Arts in Boston (look, don’t sip.)

The popularity of punch as an everyday drink eventually faded in the 19th century. We were a nascent nation left to decide who we wanted to be, and for reasons that will probably sound familiar to American readers, turned away from the flowing bowl. For one thing, modern life was creating new demands on Americans and having a large, block of time to sip punch and argue about the news of the day became increasingly rare. Central heating was invented which, to paraphrase Wondrich, “dimmed the charms of hot punch.” And perhaps most relatable, we no longer wanted to drink what everyone else in the bar was drinking. A tipple needed to be quick and individual styled, a fact of American drinking that holds true to this day.

LET’S PARTY LIKE IT’S 2O22 1722 It’s hard to know when we’ll feel truly free to gather and drink communally as we weather the pandemic, but the good news is, punch can be enjoyed until the bottom of the bowl and it can also be stored: it’s really a gift that can keep on giving. This basic template is a great place to start, but much like cooking a perfect ragu, finding out if your proportions are right and if the drink is balanced will require tasting and adjusting as you go. Things like citrus quality (some fruit will be more acidic than others), the type of sugar you use (white sugar or raw sugar), the amount of dilution you desire, etc will change the final flavors, making this template just that. Just make sure that you dilute: it tastes harmless but it is powerful stuff. You are both the punch artist and your own best customer, so above all, invoke that colonial spirit of communing for a tipple around the fire and have fun!

STEP 1 OLEO SACCHARUM
This is the step that sets punch apart from any old cocktail you can make in large enough proportion to fill a large bowl. Oleo-Saccharum sounds very fancy with its Latin moniker, but it’s really just sugared citrus oil. The good news is, it’s citrus season! You can work with any citrus except limes for this (the peels are too bitter), so have at it in your local market, and we’ll use lemons for this example. As a rule of thumb, you will need 2 ounces of sugar per fruit peeled:
INGREDIENTS
3 LEMONS
6 OUNCES of sugar (demerara or raw sugar is great here, but any sugar can work)
METHOD PEEL three lemons, avoiding the pith as much as possible. ADD them to a large bowl and cover with 6 ounces of sugar. MUDDLE the peels until they begin to absorb the citrus oil. Allow the mixture to stand for a minimum 3O minutes. If you have time, let the ingredients rest longer to do their magic, up to one day covered.

STEP 2 SHERBET
We can’t be sure if this sherbet is a relative of the sherbet melting into ginger ale that was a hallmark of 198Os bridal shower punches, either way this step dates back to the early days of punch-making. This is the step where the oleo saccharum you’ve so lovingly prepared incorporates into the juice you’re about to squeeze, forming a base for your punch. A note about citrus: they all vary in acidity, so it’s always a good idea to have some lemons on hand for this step in case you need to correct for flavor.
INGREDIENTS
3 LEMONS you’ve previously peeled, plus however many more to yield 6 ounces of citrus
Hot water (optional)
METHOD JUICE your lemons enough to yield 6 ounces of citrus and STRAIN it to remove any pulp. ADD the lemon juice to your oleo saccharum and stir to dissolve any remaining sugar. REMOVE peels with a slotted spoon unless you want to keep them for garnish. If you still have sugar granules that need to be dissolved, ADD 6 ounces boiling water and muddle or stir to dissolve. Voila, sherbet!

STEP 3 SPIRITS
INGREDIENTS
75OML BOTTLE of spirits of choice
METHOD ADD spirits to the sherbet, STIR and taste. NOTE your base spirit can be split among different spirits of your choice, for example: 9 ounces of cognac and 16 ounces of rum (a classic 17th century punch combination.) You’re mostly done at this stage! If you like, you can bottle your punch and refrigerate it.

STEP 4 DILUTION AND SPICE
INGREDIENTS
4.5 CUPS of cool water
LARGE ice block or enough cubes to fill the bowl halfway
Whole nutmeg and grater
METHOD ADD 4.5 cups of water to your base and taste. This is where the magic happens, as you attempt to balance sweetness, strength of the drink, and texture. If the punch is too strong, ADD more water, unless you will add ice cubes. If using cubed ice, FILL the bowl halfway, ADD punch, and STIR. TOP with fresh grated nutmeg.