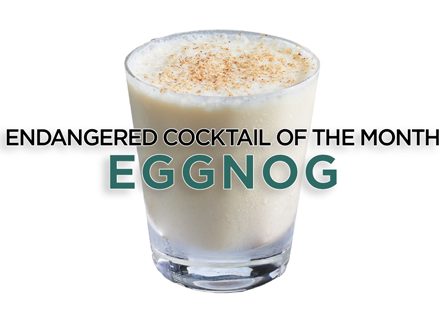 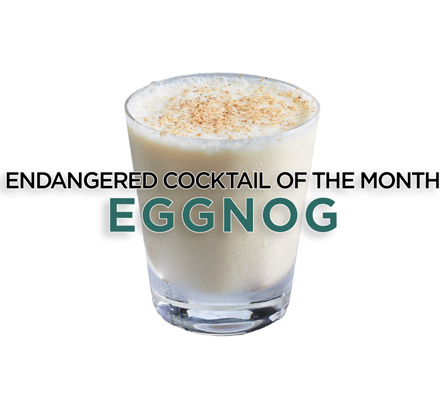 by PINK LADY
Is there any drink we more deeply associate with the 25th of December here in the U.S. than eggnog? To the uninitiated, learning about the antique practice of making cocktails with eggs can seem a bit weird, and some among us will never adjust to the idea. The exception for many is a glass of eggnog enjoyed on or around Christmas: somehow this creamy concoction that flows from a store-bought carton elicits neither the “ew” factor, nor the concerns about salmonella, that an egg cocktail mixed a la minute do. Here’s a case for trying the latter.

Alcoholic potations made with eggs and milk play a role in American drinking traditions that dates back to medieval England. To name a few, caudle was popular and had many recipe variations from the 13th century through the Victorian era, the earliest containing wine, wheat starch, raisins, and sugar. Posset, made with curdled milk, ale or wine, and spices was all the rage among the medieval upper classes and is often pointed to as eggnog’s precursor. But eggnog itself seems to be an American invention: “by the 186Os it was a drink of comfortable middle age, with a wide, if strictly seasonal popularity,” writes David Wondrich in IMBIBE!.

Egg drinks were also once a major part of day to day drinking in the States but, writes Wondrich “by the middle of the 19th century drinks made with eggs had seen their role greatly diminished.” The exceptions that survived them are the same ones we saw revived in the early aughts of this century: sours made with egg whites that give the drink a silky texture and frothy look and flips that deploy a whole egg to achieve everything an egg white can provide, plus full and decadent flavor. Tom & Jerry’s are a cold weather favorite that never fully disappeared, and your local cocktail bartender will likely deploy their own recipe for that this month. But, writes Wondrich, in the pre-Prohibition golden age of cocktails, it seems “the only time that egg drinks really recaptured their former importance was on Christmas and New Year’s Day, when they were mandatory.” The same is true today. We advocate eggs drinks year-round, but if you’re a once-a-year egg drinker, it’s time to get your eggnog-shaking arms in gear to mix like its 1862. Give this recipe a whirl.

SHAKE ingredients very well in a cocktail shaker without ice. ADD ice and continue to shake until chilled. STRAIN into a chilled coupe glass.
GARNISH with nutmeg.