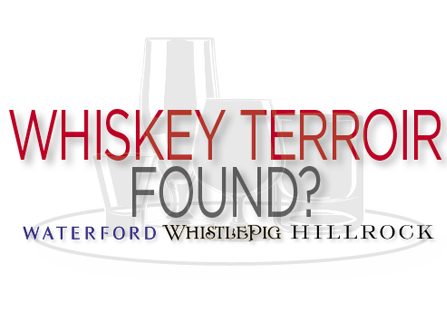 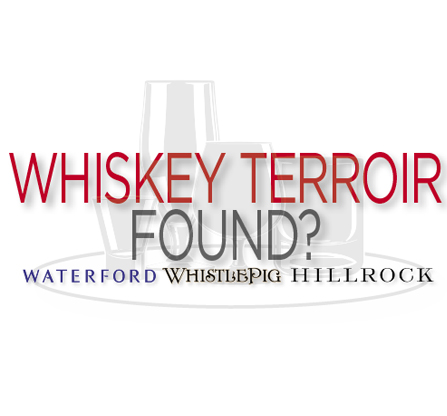 by LEW BRYSON
In September, I took part in a blind tasting of three single malt whiskeys with another whiskey writer. We didn’t know the brand, type of barrel they were aged in, or where they came from.

The first smelled cleanly of caramel, malt, and some crisp apple, without any overt barrel influence. The second had a shy nose of fresh sawdust and Juicy-Fruit gum, hotter and spicier on the palate. The third was softer, subdued, but a flavorful middle ground of sweetness and spice. Three clearly different whiskeys.

Surprise! They were all the same whiskey: Waterford single malt, the new Irish distillery guided by the wine-informed vision of Mark Reynier, the man who rebuilt Bruichladdich. The only difference among the three – identical in fermentation, distillation, barrel type, aging – was the source of the barley. It was all malted at the same facility, but the barley came from three different Irish farms: different soils, different microclimates, different farmers. For the first time I came face to face with what seemed like incontrovertible evidence for the elusive, controversial idea of whiskey terroir. I’m now a believer, mainly because I can’t see any way not to be after tasting those whiskeys. Terroir is going to become more and more of a selling point for craft whiskeys, and it’s a fairly complex thing, so you’ll want to get up to speed.

Terroir, of course, is from the French concept of goût de terroir, literally the “taste of the soil,” but it means something more like “taste of the place.” It is a combination of the soil, the climate, the topography (the slope and altitude of the land), and whatever other factors that particular patch of ground may possess that affect the taste of wine made from the grapes grown there. This concept provides endless hours for wine drinkers and wine makers (and column inches for wine writers) discussing whether terroir can actually be tasted, how small or large an area has the effect, what causes it. It’s far from settled whether it is quantifiable, whether it’s real, but it is accepted by many wine drinkers and makers.

The idea of terroir in whiskey is relatively new and does not yet have generations of supporters. Opponents make good arguments that the taste of the place is much further removed in whiskey.

• Whiskey is more processed than wine. Grain is malted, milled, mashed, fermented, distilled two or more times, diluted, barrel-aged for years, diluted again, blended.
• Almost all whiskey is made with grain from multiple sources in anonymous blends from large suppliers.
• The influence of the barrel, especially in American whiskeys, is huge and potentially overwhelming; 8O% of the flavor is the rule of thumb in bourbon.

The late Dave Pickerell, an experienced distiller who had a deep influence on the American craft distilling industry, had an answer for them. He told me in 2O1O that we’re only starting to see the effects of terroir in whiskey because we’re only now tasting whiskey made from small enough plots of grain that we can taste a difference. The differences among fields and areas get lost when grains from those different fields are all dumped in one big silo at a storage facility.

Waterford’s Mark Reynier kind of did that in reverse. They built a special grain-storage facility at the distillery that they call The Cathedral, designed to keep grain from 35 different farms separate. “Waterford is a quest to unearth natural barley flavors. That’s what it’s about,” Reynier said. “The most flavorsome whiskey in the world is made from malted barley. What startles me is that no one looks where that flavor comes from. The industry looks to the stills, the barrels, but they should be looking over here, where that flavor comes from. We’re in Ireland because of the barley.”
Reynier left nothing to chance. “We developed our own software that tracks farm, malting, distilling, warehousing,” he said. “We have 8OOO data points by the time it goes from farm to bottle. The building blocks, the single farms, that’s what we’ve got maturing in barrel. Each one is terroir-defined, different. The cynics will say, ‘There’s the malting process, the distilling, the fermentation. The terroir is a red herring!’” He laughed and said, “I knew you’d say that. The first year and a half, we did them all the same. Same fermentation, same distillation, same barrels: the difference is the terroir. Don’t believe me: go to the terroir code, it’s ten pages of technical data on the whiskey!”

WhistlePig in Vermont is still in the process of developing their local flavor, but they’re going a bit further. They’re growing grain on the farm that surrounds the distillery: rye, wheat, corn, and barley. Everything’s mashed and distilled with water from the farm’s well. They hope to harvest oak from the trees on the hill to make barrels, but for now they’re sourcing Vermont oaks, having barrels made, and finishing the whiskey in those barrels. But it is still a work in progress. “We’ve been trying to improve our soil health, and getting better growing conditions, and we’ve been tracking that,” said Emily Harrison, the distiller. “It’s hard to look back and see what happened with each of those fields to make things different. We’re looking at soil condition and rainfall, but we also have a lot of turkeys onsite, about 6O of them. If the turkeys eat out a lot of the grain, that could affect the growing conditions. There’s so much stuff that affects grain that isn’t really trackable. It’s hard to track it down to individual fields: rain, weeds. We try to trace everything possible, but everything that touches it makes a huge difference.”

Hillrock Estate distillery is in New York’s Hudson Valley and falls between Waterford and WhistlePig on their position on terroir. “We started making whiskey over ten years ago,” said co-founder Jeffrey Baker, “and from day one, everything we’ve made we tracked back to its field of origin.” You haven’t heard much about that because they’ve been focused on their solera bottlings, but that’s going to change. “We’re going to do our first individual field releases of single malts soon,” Baker said. “We did four different locations with the same variety. We’ve been tasting them and there are 1OO% material differences. I think what I’ll more than likely do, I’ll pick three that have more identifiable terroir and do them as a three-bottle release.” The direct farm connection works. “Demand is just skyrocketing,” said Baker. “I think it’s clear that people are focused on it. I don’t know if anyone else is 1OO% estate grown.” He also noted something that seems to support the idea that it’s the farm that’s interesting people. “WhistlePig and Hillrock sell well together, we’ve found.”

Waterford’s Reynier has released the next step in his long-term plan: The Cuvee. “Single farms, on their own, compared and contrasted, are intriguing,” he said. “If we put those terroir-defined flavors together, in a cuvee, we get something that’s even greater than the parts. If you want Waterford, here it is: the Cuvee, the coming together of these terroir-derived flavors. And that’s the point of the whole process, to make the greatest whiskey.” This could be the new frontier. “I’ve been amused to see how many others have locked onto it,” Baker said. “This is where it’s going. Some of the big Kentucky distillers are buying farms.” I know Michter’s and Buffalo Trace are farming. Emily Harrison sums it up, and kind of sums up whiskey making, in this observation. “Every piece of the process,” she said, “can make a night and day difference.”

DOWN ON THE DISTILLERY FARM WhistlePig isn’t the only distillery on a farm in New England. It is an old tradition, with roots in Central Europe where farmers distilled schnapps from rye; and Normandy’s orchards feeding calvados stills, and of course the Scots and Irish turning barley into malty mountain dew. Farm distillers touched off the Whiskey Rebellion in western Pennsylvania when Alexander Hamilton wanted to turn their mountain dew into tax revenue.

But Prohibition put an end to independent farm distillers, and post-Repeal distilling was much more industrialized. When people started thinking about tiny craft distilleries in the 199Os, though, some of them thought about growing their own base materials. New Englanders, no strangers to doing things on their own, got down to it.

Cold River Spirits in Freeport, Maine, was one of the first. Co-founder Donnie Thibodeau grows the potatoes used to make their luscious vodka and crisp gin. It’s hard to imagine a more natural thing than a Maine potato farmer making vodka, and it definitely works. Another Maine producer, Hardshore Distilling in Portland, makes only one thing: Gin. They make it Portland from grain grown on founder Jordan Milne’s family farm in upstate New York. If you want to argue about whether that ‘counts,’ try some of the gin first. You might find it persuasive. Flag Hill Distillery is in Lee, New Hampshire. They transitioned from a dairy farm in the late 198Os, growing grapes to make wine, and soon were buying apples to make apple brandy and vodka. They started growing grain in 2O15, and now produce whiskey as well. Dry Line is out on Cape Cod in North Truro. You’ve probably guessed that no one can afford to farm that close to Provincetown, and you’re right . . . but the folks at Dry Line do flavor their gins with locally raised botanicals. Their angelica root is raised in composted grape skins from the local Truro Vineyards. I definitely expect more farm distilleries to open, and given New England’s old and varied agricultural traditions, I’m sure some of them will be Yankee distilleries.