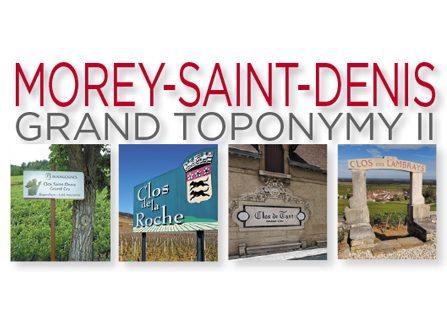 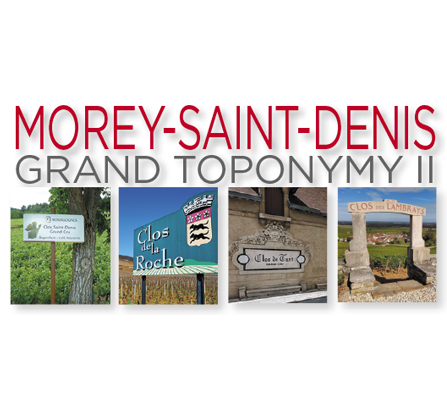 by HARVEY FINKEL
In this second installment on the origin of Burgundian place names, focusing on the grand crus of the Côte d’Or, we shall begin our march southward, entering Morey-Saint-Denis. We might recall that our journey began in Gevrey-Chambertin in this space of the August, 2O2O, issue of this journal.

The sometimes underrated Morey-Saint-Denis was late to add the ecclesiastical name of one of its grand crus in 1927. The Morey likely comes from an ancient Gallo-Roman man’s name, as in the farm of Murricius. An alternative interpretation has Morey descending from the common Latin , indicating the hillocks or mounds left by glacial erosion: the same root as moraine’s.

The commune is host to five grand crus, all approved only for red wine. One, Bonnes Mares, lies mostly in Chambolle-Musigny, and will be addressed when we visit there. All but Bonnes Mares are clos, a word derived from the Latin clausum, enclosed place. Appended to the names of more than six score parcels in Burgundy, used since the first century, it has come to signify an enclosed or walled vineyard with specific legal rights. The enclosure is usually of stone, but may be of other material, such as hedge.

CLOS SAINT-DENIS The grand cru in Morey-Saint-Denis of this name and the like-named lieu-dit in Flagey-Echézeaux, were both owned by the canons of the Chapter of Saint-Denis Church in Vergy, and named in their memory. The very wealthy Lord Humbert de Vergy, later Bishop of Paris, established the chapter in 1O23. Saint Denis had been the first Bishop of Paris. The canons cultivated vines through the Côte de Nuits.

CLOS DE LA ROCHE This is the largest and probably the best of the four Morey-Saint-Denis grand crus clos, though it has never been enclosed. The use of clos, therefore, continues to puzzle. One theorist imagined it had been owned by an abbey, which did as other abbeys. It dates back at least to the early twelfth century. Roche is thought to refer to the large rocky deposit (limestone) in the slope, once a quarry. A few have speculated that this was once a Druid religious site, perhaps of human sacrifices.
CLOS DE TART No, neither demimondaine nor pastry, it was originally Climat de Forge in the village of Tart-le-Haut. It was founded in 1125 as part of the first abbey of Cistercian nuns. Tart may have descended from the pre-Indo-European root, tor, height. Clos de Tart had been owned by Mommessin as a monopole from 1932 until purchased by Groupe Artémis in 2O17.

CLOS DES LAMBRYS This vineyard was not promoted to grand cru until 1981. Founded in 1365 as Cloux des Lambrey, it may have been named for a prominent fourteenth-century family.

In addition to its four and a bit grand crus, Morey-Saint-Denis contains 2O premier crus and 26 lieux-dits that could appear on a label, all approved for both red (mostly) and white wine. 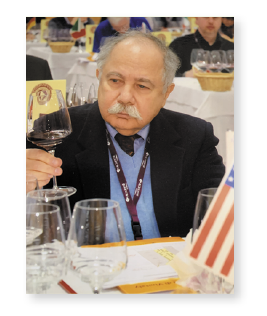 I wrote my first wine column in 1974, or rather it wrote itself. It soon became a pleasant habit, installed successively in such venues as The Boston Phoenix, The Boston Globe, The New England Wine Gazette, Quarterly Review of Wines, The Wine News, the annals of the Society of Wine Educators and La Confrérie des Chevaliers du Tastevin, and last, longest, and most comfortably right here in Massachusetts’ trade journal. I shall continue to contribute to the critical reviews of the International Scientific Forum on Alcohol Research. Writing for MASSACHUSETTS BEVERAGE BUSINESS began as an accident: I offered to write an obituary when my friend New England wine guru Myron Norman died in 2OO1. I never left.

Writing about wine has opened worlds to me: vineyards across the globe, all manner of foods and cultures, science and art, and the fine people who are the many facets of the wine trade. Few of them are just about wine; they engage a remarkable range of talents and knowledge. I have always viewed these columns as teaching, and I have learned every step along the way.

I regret this will be my last regular column. My energies no longer suffice to keep current. I am grateful to my gentle editors and to the readers who paused a moment to share my thoughts. -HARVEY