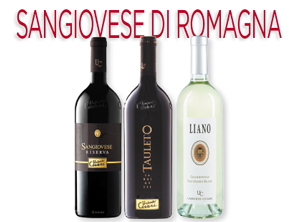 by HARVEY FINKEL
Although Sangiovese is the signature wine of central Italy, and in its highest iterations almost thereto confined, it also makes its mark to the northeast in Emilia-Romagna: same grape variety, different clones, some similar wines. (Sangiovese also appears in respectable roles in the Marche and in Umbria.) Wines of complexity and elegance are demanded in this, the reputed home of Italy’s finest cuisine, home of Parmigiano Reggiano, aceto balsamico tradizionale, Prosciutto di Parma, pasta fresca, and Culatello di Zibello.

Romagnans may insist that Sangiovese, called “Sanzves” in their dialect, originated right there in Sant’ Arcangelo di Romagna, not in Tuscany or points south. If it seldom reaches the heights of better-known Tuscan textbook exemplars, the Romagnolo version grown in the right places in the hills southeast of Bologna is well worth getting to know. Here, the vines grow in marly or sandy clay soil on hillsides 1O-25 kilometers from the Adriatic Sea. The wines usually contain less acidity and tannins than their Tuscan cousins. Sangiovese di Romagna earned its DOC in 1967. It is required to contain at least 85 percent Sangiovese, the other 15 percent of grapes coming from the production zone. Of the DOC-ranked wines, we should be concerned with the Superiore and Riserva classes. Superiore is grown in the top areas of the zone, the hills south of the Via Emilia. It must contain at least 12 percent alcohol. Riserva is made from lower yield vines, and aged at least two years before release. The basic Sangiovese is apt to be thin and basic. The Novello, subjected to carbonic maceration, is of little interest. As in Tuscany, elite IGT wines not conforming to strict regulations often top the table and the price list.

Umberto Cesari was a pioneer in the recognition of the export quality of Sangiovese di Romagna. He and his wife, Giuliana, established their company with 2O hectares of vines in Castel San Pietro Terme outside Bologna in 1964. It has expanded over the years to encompass 175 owned plus 18O rented hectares. The 355 hectares of vineyard are subdivided into eight estates, which, in addition to Sangiovese, grow such other regional varieties as Trebbiano, Albano, and Pignoletto, and the usual international grapes. Sustainable practices in the vineyards and modern technology in the winery have long been routine. Umberto Cesari died in April 2O19. The company is now led by his son, Gianmaria. It produces four million bottles of wine annually, of which 9OO,OOO are Sangiovese di Romagna (without counting Sangiovese-containing blends). Twenty percent of the Sangiovese di Romagna is exported to the US.

LIANO CHARDONNAY-SAUVIGNON BLANC
RUBICONE IGT 2O18
UMBERTO CESARI $28
Cesari produces wines in addition to Sangiovese. This is one of them, 7O percent Chardonnay, 3O Sauvignon Blanc grown at the Liano estate on vines that are 12-15 years old. Aged three months in medium-toast 5.5-hectoliter Allier oak tonneaux and at least three months in bottles. Clearly no ordinary wine. Smells of Chardonnay fruit with a nice lemon-peel Sauvignon element. In the mouth, the Chardonnay is dominant, and appealing.

UMBERTO CESARI WINES ARE DISTRIBUTED IN
MASSACHUSETTS BY RUBY WINES.