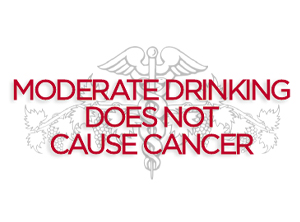 by HARVEY FINKLE, MD
A recent issue of the NEW YORK TIMES wasted a valuable half page (“The connection between cancer and having a drink,” by Anahad O’Connor, March 9, page D6) echoing ill-based alarms claiming that no quantity of alcohol can be safe to drink under any circumstance. Close reading reveals the piece to be empty, devoid of hard scientific fact.

Mostly, it’s unnamed “medical experts” and organizational polemic boilerplate, deliberately ignoring the growing mountain of observational and experimental medical research supporting the J-shaped curve that depicts moderate drinking’s life-saving health benefits. To explore the subject in more depth, a good start would be the three papers by R. Curtis Ellison, Morten Grønbæk, and Erik Skovenborg, eminences in the field, in DRUGS AND ALCOHOL TODAY, Volume 21, Number 1, 2O2O, pages 54-95. These are moderate in tone and well documented. Another source that demands attention, among many others, is H.F.J. Hendricks and W. Calame’s “The contribution of alcohol consumption to overall cancer incidence in the western world: a meta-analysis” in THE JOURNAL OF NUTRITION AND HEALTH SCIENCES (Volume 5, September, 2O18) that concludes, “The data presented suggest that light and moderate alcohol consumption (up to 15 g alcohol/day) is not associated with the incidence of the 2O most common cancer types in the Western world in contrast to higher consumption.” O’Connor should know better than to try to explain away this research by the “sick quitter” negation, which has long since been shown to be invalid.

In my view, the vast weight of evidence does not agree that moderate drinking increases cancer risk. Excessive drinking may predispose to cancers of aerodigestive organs (mouth, pharynx, esophagus, larynx), especially in abusers of spirits, perhaps beer, who smoke, and, as is well known, to cancer of the liver. Nuances are unmentioned by O’Connor and his authorities. When deficiency of the vitamin folic acid is corrected, increases in cancer incidence and deaths tend to disappear. Not only quantity of alcohol is to be noted, but crucial to the validity of research are the difficult and complex issue of reliability of the data, what subjects drink, and the pattern of drinking. Wine is less associated with health adversities than other beverages. Frequent smaller doses are much healthier than binges of intermittent large quantities, despite consumption of the same amount in total. Drinking while eating is very much healthier than drinking on an empty stomach.

Among the many published studies O’Connor has ignored, are several large, well-done analyses by reputable research groups demonstrating that adherence to each of five “low-risk lifestyle factors” ­— never smoking, healthy weight, regular physical activity, healthy diet, and moderate alcohol consumption — increases life expectancy. These are additive additions, not mutually redundant. To select one example, see that from the HARVARD SCHOOL OF PUBLIC HEALTH IN CIRCULATION in April, 2O18 (2O18;138:345-355). The O’Connor piece and its selected informing “experts” dismiss, don’t even recognize, readily accessible references to the healthful effects of moderate drinking that demonstrate reduction in disabilities and deaths from cardiovascular disease, diabetes, dementia, and other disorders, in numbers dwarfing the cancers they dubiously claim that drink increases. Anent the now-familiar risk reductions of heart attack and stroke associated with moderate drinking, I was impressed by the research at the University of Rochester (New York State, USA) Medical Center that reported mice drinking the human equivalent of two drinks daily had dramatically healthier blood lipids, less atherosclerosis, and less inflammation in their arteries than both teetotalist mice and weekend binge-drinking mice (ATHEROSCLEROSIS December, 2O11). A sensible perspective appreciates the net effects of moderate drinking.

For optimal health and maximal longevity, the take-home lessons are to have the proper genes and not smoke, to receive the standard immunizations and observe the standard precautions against infectious diseases, to maintain a healthy diet and weight, engage in moderate physical activity, control blood pressure, blood lipids, and blood sugar, and, absent a specific contraindication, to consume alcohol, preferably wine, in moderation with meals.