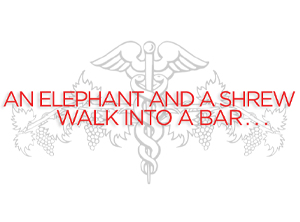 by HARVEY FINKEL, MD
Tales have long been told of creatures of the wild encountering alcohol, with varying consequences. Perhaps most evocative is the apparently authentic story of the herd of wild elephants that crashed a brewery, consumed its great-tasting, less-filling product, and went on a rampage. African elephants have been repeatedly reported becoming intoxicated by feeding on the fallen, fermenting fruit of the marula tree. Wild chimpanzees have been witnessed in Guinea, West Africa, using leaves to sponge up large quantities of fermented raffia-palm sap (3.1-6.9 percent alcohol by volume) without ill effect. Birds fall out of trees after eating fermented berries and sap. Elk and moose are said to fall afoul of overripe, fermenting apples, thus getting caught in obstacles such as swing sets and hammocks: picture Bullwinkle thus entangled. Free drinkers may come to grief due to impaired avoidance of predators or to getting lost. And recall poor Dumbo’s experience. Naturally fermenting nectars may reach 3.8 percent, fruits 8.1 percent alcohol. Foraging mammals may detect the odors of volatile alcohols much like truffle-hunting dogs, and even prefer alcohol-containing foods and drink.

Some skeptical scientists scoffed, pointing out that large animals would have to binge down many liters of alcohol to accomplish such mayhem. Their disbelief is refuted, however, by a research article published April 29, 2O2O, in Biology Letters by Mareike Janiak, et al., of the University of Calgary. Reasoning that alcohol metabolism (neutralizing breakdown by body chemistry promoted by enzymes) varies among species, these researchers investigated alcohol dehydrogenase, which controls the initial and chief step in attacking ethanol, the main form of alcohol resulting from the fermentation of sugars. Enzyme activity, and thus toleration of alcohol, likely varies on an evolutionary basis, depending on whether diet contains fermenting fruits and nectars. It is present in the mouth, esophagus, and stomach, as well as the liver, and so would be protective against excessive ethanol and other, toxic, alcohols derived from certain leaves.

Around the time, at least ten million years ago, that anthropoids came down from the trees, a mutation occurred in the alcohol dehydrogenase of several species, including humans and the African great apes. This mutation, termed ADH7, enables a fortyfold increase in the enzyme’s efficiency against alcohol, rendering these groups remarkably resistant to what would be disabling, even fatal, immoderation. But, somewhere along the time line, ten groups of mammals lost ADH7, thereby becoming cheap drunks. They are largely species that subsist on diets without fruits or nectars that might ferment to alcohol, thus are hypothesized under less evolutionary pressure to retain the super enzyme. These include carnivores, armadillos, which are insectivorous, cattle, horses, elephants, rhinoceroses, guinea pigs, degus (a rodent), and beavers. Here lies the explanation for some of the disbelieved observations of animal misbehavior. They cannot hold their liquor like men, or even women (whose alcohol dehydrogenase amounts to only half that of men’s).

But things are still more complicated. Who do you think would win a drinking contest, an elephant or a shrew? Whose bar bill would you rather pay? The male African bush elephant (Loxodonta africana) is the largest land animal, weighing upwards of 15,OOO pounds. The pen-tailed treeshrew (Ptilocercus lowii), a native of southeast Asia, weighs in at just an ounce and a half. While it would take 16O,OOO of them to counterbalance our elephant, the little fellow easily outdrinks Jumbo, and is the designated driver on the way home. Treeshrews have proportionally larger brains than humans. They spend a couple of hours every evening guzzling the equivalent of a dozen glasses of wine, in the form of fermented nectar (3.8 percent ethanol) from the flower buds of the bertam palm, with which they maintain a symbiotic relationship. The palm provides abundant nectar, which natural yeasts ferment; the shrew helps pollinate the palm.

The treeshrews show signs of neither inebriation nor toxic effects, despite lifelong intemperance. They would be more likely to drown in a drink than to get drunk. How shrewd. It is not known whether they are subject to hangover. Their means of dealing with the calorie-rich alcohol remain unknown. Frank Wiens, et al., writing informatively in the Proceedings of the National Academy of Sciences of July 29, 2OO8, believe it was an early evolutionary advantage that may have included several mammalian lineages, including primates, to which treeshrews are distantly related.