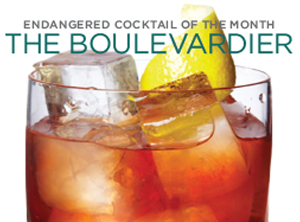 by PINK LADY
We are more than happy to bid farewell to 2O2O, and welcome the New Year with a cocktail that fits our current mood: braced for a dark winter, fortified with a strong spirit, slightly embittered but nonetheless well-appointed and pretty to look at. We present to you for your January drinking: the Boulevardier.

This cocktail turned 1OO years old last year, but truth be told the drink really hit its stride more recently, around the 2O1Os, as the burgeoning mixology renaissance dusted off the recipe to impress newly whiskey-thirsty crowds. The original recipe can be found in Harry MacElhone’s Barflies & Cocktails, which was published in 1927.

We reference Harry a lot when we talk about Prohibition-era drinks. He was a character in his own right, Scottish by birth by having spent time in New York at the Plaza Hotel and in London and Deauville, France at Ciro’s. Many wonderful drinks were created at his Paris watering hole, including the French 75 and the Scofflaw, and goodness knows anything Harry was serving there was far superior to the makeshift cocktails Americans were working with as they sipped illegal bathtub gin during Prohibition. Harry’s New York Bar (in Paris) was an epic hangout, where famous expats bent the elbow, including Ernest Hemingway and F. Scott Fitzgerald. There is lore that the piano bar is where Gershwin composed An American in Paris.

The Boulevardier was a magazine edited by socialite Vanderbilt, and expat writer Erskine Gwynne, and that’s where this drink takes its name. At its heart, the drink is a bourbon Negroni, with a recipe so simple you’d have to work to forget it. Hunker down with one as we toast 2O21!