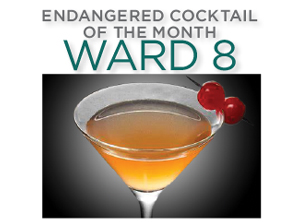 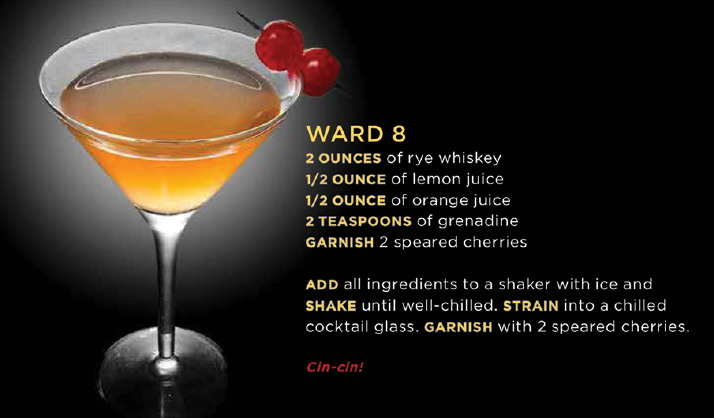 by PINK LADY
As we gather around for our Thanksgiving festivities this year, why not raise a glass of one of Massachusetts’ most iconic cocktails, the Ward 8? It’s been a wild ride of a year and an even more wild election season, and we think everyone could use a drink.

The Ward 8 Cocktail was created in an election year, one that happened long enough ago so as to not be at all controversial to your dinner guests. As the story goes, the drink was created in 1898 at the iconic Locke-Ober restaurant to celebrate the election win of political icon Martin Lomasney, and named for the voting district which would secure his victory. Nicknamed “the Mahatma” for his ability to deliver votes, Lomasney was known as a political boss of the West End and highly influential in Hub politics for over 4O years. The victory dinner where this drink was invented feted him, as the legend has it, the evening before the election was held. How’s that for confidence?

As David Wondrich points out in Imbibe! the story is a bit dubious because grenadine didn’t capture the attention of bartenders until the 19OOs, when it became the “hot ingredient”, and was quite rare to see in drinks before that. In another version of the tale, the drink was invented in 19O3 at The Puritan Club by bartender Charlie Carter to celebrate the victory of the same politician, Lomasney.

Most in the cocktail world have allowed the story to stick to Locke-Ober, and as both the iconic restaurant and even the neighborhood where Lomasney ruled the roost are now gone, it seems immaterial which tale is correct. With so much other fake news to fight about, we’ll let this story slide.