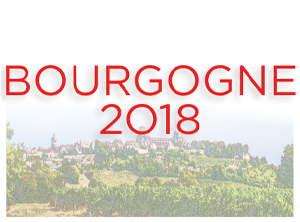 by HARVEY FINKEL
Hot. Abundant. Splendid. Costly.
Thus may be characterized conditions throughout the region for the Burgundy vintage of 2O18, from Chablis in the north to Beaujolais in the south. After 3O years of creeping advance, global warming may now have declared it’s staying for dinner.

The preceding winter of 2O17/2O18 was mild and wet, filling underground water stores and fostering early and rapid vine growth. After some precipitation at the start, the growing season was evenly dry, sunny, and hot all the way through. Except for two hail visitations limited to southern Nuits-Saint-Georges in the first half of July, there were no damaging freezes or storms. As pointed out by Neil Martin and others, though almost unprecedentedly hot and sunny, this was not the unremitting torrid blast of 2OO3. The traditional 1OO-day hang time decreased to 8O, and the typical satisfactory 12OO sunlight hours brightened to 155O. The season’s temperature was 2˚C higher than average. It was sunnier in Dijon than down on the Mediterranean in Nice.

In keeping with the 3O-year trend, harvest was early. Because of the rapidly skying sugars outstripping physiologic ripening, and the need to preserve acidity, decision when to pick was difficult, and varied. I am often struck by how different routes may lead to the same excellent result. Due to the dryness, there was little disease of the grapes. Harvest was carried out under fine weather. Harvests were accomplished quickly, though some parcels ripened out of their usual order. Flexibility was thus demanded. Yields were surprisingly high for Chardonnay, average, though variable, for reds. Sugars were high, but enlivening acidity mostly at least sufficient, despite the heat ­— none of the flabbiness or tropicality of 2OO3.

Fermentations were slow to finish. There remain differences among vignerons on the inclusion of stems. Keeping stems, as in whole-bunch fermentation, adds potassium and reduces acidity, but enhances fruitiness and ripeness of flavor. Complete destemming favors freshness and complexity. Some modify by the labor-intensive compromise of removing the central axes of the bunches, keeping the peripheral stems. Fermentation temperatures were kept from extremes. Sulfur dioxide use was minimized. All handling was kid-glove gentle. Another difference among vignerons involved barrel treatment. How long? How much new? The weight of success seems closer to two years than one, while the proportion of new oak used appears to have decreased. The wines evolved high but not excessive alcohol, good acidity, and excellent overall quality everywhere. Whites appear to surpass the reds. The less fashionable villages are said to be good values, especially in view of the expected high prices.

Prices are difficult to predict, especially in the face of the ongoing pandemic. One wonders at the restraint imposed on importers in response to the 25 percent tariff irrationally imposed on still French wines of 14 percent alcohol and below in standard 75Oml bottles, and whether the Trump administration might execute its threat to impose a 1OO percent tariff. Asia, particularly China, is bound to play an increasing role in the pricing of the always-limited supply of quality Burgundy. It is safe to guess that prices will not decrease.