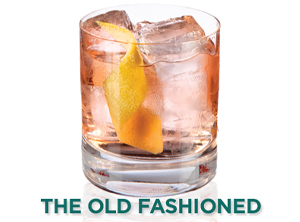 by PINK LADY
When I got into this game, the Old Fashioned cocktail was ordered so infrequently that I clearly remember the first time I saw one made. I watched from the host stand at the high-end restaurant where I worked in college as the bartender tossed a sugar cube, bitters, orange slices, and a neon red maraschino cherry into a glass and began to smash them with god knows what: there were no strainers, jiggers, or bar spoons on that bar, and while I can’t remember the tool she used to produce this bizarre-to-me concoction, it surely wasn’t a muddler. “What on Earth was that you just made?” I asked her after the august, septuagenarian gentleman who’d ordered the drink had gone home. These were the days of Cosmos and Appletinis, after all. “That’s an Old Fashioned,” she said, “They’re a pain to make.”

Nowadays, the Old Fashioned is widely popular amongst drinkers of all stripes, from oldies to newly minted 21+ drinkers. My brother, who has always loved Tito’s & soda for its flavorless efficiency, now considers himself an aficionado of the robust Old Fashioned. Every whiskey brand under the sun advertises theirs as the best whiskey for your Old Fashioned cocktail.

The fact is, the Old Fashioned has been “old” for a long, long time. The drink is in fact considered to be the first cocktail! Long before the term “cocktail” encompassed all mixed drinks you might encounter in a bar, “cocktail” was a particular recipe for a drink. The original formula, as described in THE BALANCE AND COLUMBIAN REPOSITORY OF HUDSON, New York on May 13, 1806, was for “a stimulating liquor, composed of spirits of any kind, sugar, water, and bitters – it is vulgarly called a bittered sling.”

The term “Old Fashioned” became a descriptor many decades later in the Gilded Age when it had become vogue for bartenders to modify this original formula with all manner of other ingredients, from curacao to absinthe to orgeat to fruit juice. Rather than leave oneself to the bartender’s whim and interpretation when ordering a Whiskey Cocktail, drinkers in the 1870s and 1880s learned to order their cocktail the “old fashioned” way.

“In the fullness of time, even the Old Fashioned, whose very essence was its monolithic plainness, started getting the treatment,” writes David Wondrich in Imbibe! Indeed, the 20th century saw the drink morph into a whiskey cocktail made with one or more slices of orange and maraschino cherries atop that hefty spoonful of sugar. THE DIFFORD’S GUIDE speculates this began during Prohibition to make inferior liquor palatable, and describes it as an entirely American phenomenon.

The 21st century has seen cocktail aficionados hearken back to that original simple recipe for spirits, sugar, water, and bitters, and in some cases depart from it nearly as quickly as they arrived. Modern-day bartenders like to add their own twists to things just as much as their Gilded Age counterparts, after all. Once you get the basics down, you likely will too! This classic formula will get you well on your way.

Muddle sugar and Angostura bitters in a splash of water or soda until the sugar is dissolved, forming a syrup at the bottom of the glass. Add whiskey and ice, and stir. Garnish with a fresh twist of lemon peel.