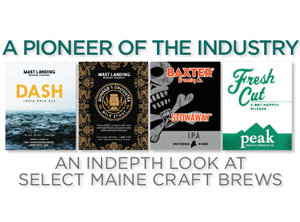 by ANDY CROUCH
Maine has long been one of America’s great brewing states, with a beer culture as distinctive as its craggy coastline, unspoiled lake expanses, and rugged, rocky lands. The state supports a growing number of impressive craft breweries, with most concentrated around Portland but also ranging throughout New England’s largest state. These often include tiny family operations located down out-of-the-way dirt roads.

From Prohibition to Allagash and Bissell Brothers, the story of Maine’s relationship with beer is richly complex and worthy of its own telling. Maine is an unlikely pioneer in the annals of craft brewing. The state long flirted with prohibition and brewing never gained a stronghold here as a result. The state witnessed the formation of its first temperance group in 1834 and twelve years later, the group scored a political victory with the passage of the nation’s first prohibition law. In 1852, three more New England states, Massachusetts, Vermont, and Rhode Island, fell to Prohibition. Connecticut followed suit in 1854 and New Hampshire joined in 1855. The idea began to gain national prominence and several other states followed the Maine model. With the ratification of the 18th Amendment ratification in 1919, America became a dry nation on January 16, 192O.

Despite the repealing of national prohibition, brewing in Maine shows little signs of existence before David Geary came along with the revolutionary idea of opening his own place. Since that fateful decision in 1986, Mainers have fully embraced brewing. For much of the state’s recent history, craft brewers mainly produced a few hundred barrels a year, in an astonishing rebirth of the ancient cottage brewery tradition. These small producers brewed beer to serve their local communities. On the opposite end of the spectrum, Maine is also home to some of the most influential brewing outfits in the country. Names like Oxbow, Allagash, Bissell Brothers, and others get the attention of every kind of beer geek, regardless of their home.

DASH IPA
Mast Landing Brewing Company
Westbrook, Maine
alcohol by volume 7%
www.mastlandingbrewing.com
A bit of a style bender, Mast Landing’s Dash IPA straddles the New England India Pale Ale and West Coast IPA styles. Pouring with a relatively hazy light orange, with flickers of lighter hues mixed in, Dash reveals a hefty dollop of off-white foam with solid retention. The aroma kicks playfully with notes of bright citrus peel on top of some mild herbal and onion notes. Bits of sweetness mix with some danker hop notes. The flavor follows with stronger herbal notes than the nose might suggest. Brewed with Ella, Azacca, and Hallertau Blanc hops, Dash offers strokes of citrus peel back layers of light sweetness over a striking cucumber and mild vegetal note. A prominent bitterness maintains its balance throughout the otherwise creamy mouthfeel. A curious and engaging IPA. AVAILABLE from Nightshift Distributing.

GUNNER’S DAUGHTER
Mast Landing Brewing Company
Westbrook, Maine
alcohol by volume 5.5%
www.mastlandingbrewing.com
On the opposite end of the spectrum from Dash, Mast Landing’s popular Gunner’s Daughter is a milk stout that bursts with notes of peanut butter, coffee, and dark chocolate. Promoted as a peanut butter milk stout, Gunner’s Daughter is not actually made with any nut products. Pouring jet black in color with light flecks of dark red and brown notes at the edges, it follows with a light tan head that quickly settles out. The aroma is strongly of peanut butter and like roasted coffee notes mixed with bits of darker chocolate. There is a slight salted edge balancing it out and preventing any cloyingness. With a surprisingly light body, the flavor continues with a mix of roasted peanuts and coffee over dark chocolate and some light toasted notes. The carbonation level is moderate, which helps balance the flavors. In a world when many stouts are over the top in terms of sweetness or ingredients, Gunner’s Daughter is a welcomed respite and a gentle evening sipper. AVAILABLE from Nightshift Distributing.

STOWAWAY IPA
Baxter Brewing Company
Lewiston, Maine
alcohol by volume 6.9%
www.baxterbrewing.com
New England was once known as a land full of malty, dull, and largely under-hopped India Pale Ales. The so-called East Coast style IPA was not a thing that garnered much in the way of respect. That changed with the development, evolution, and explosion of the now dominant New England IPA style. While this hazy style has conquered beer scenes from Boston to Beijing, many New England brewers remain dedicated to brewing an updated version of the old East Coast style IPA. Baxter’s Stowaway is one of these beers. Pouring with a deep orange hue and a decent and sustained white head, Stowaway offers citrus notes, not the ripe, juice bombs more in style today, but deeper grapefruit aromas over a sweeter caramel bits. The flavor is true to East Coast IPA form, with a balance of hop flavor and bitterness in the grapefruit and orange families along with pine followed by a substantial dose of sweet caramel malt. The beer finishes with a decent and sustained bitterness that balances the maltier elements. AVAILABLE from Atlas Distributing, Burke Distributing, Colonial Wholesale Beverage, Commercial Distributing Company and Merrimack Valley Distributing.

FRESH CUT PILSNER
Peak Organic Brewing Company
Portland, Maine
alcohol by volume 4.6%
www.peakbrewing.com
The market for organic beers once looked quite promising. But after more than a decade of trying to push the concept, it never fully developed. There have been sourcing problems for raw materials. And consumers never really flocked to the concept. Many breweries that focused on producing organic only beers either went out of business or transitioned into brewing non-organic products. Peak Organic is one of the few that survive and focus on brewing with organic ingredients. The Fresh Cut Pilsner is a delightful warmer month sipper. It pours a dullish golden color with a substantial whip of two fingers of foam with strong head retention and solid lacing. The aroma starts with a bready note followed by some light herbal and floral\bites of American hops, including Chinook, Citra, and Centennial. This distinctly American take on the pilsner style continues with more bready flavors and hints of grass and light American hop bitterness over a mild malt base. Hoppier than most American style pilsners, Fresh Cut is a fun drinking beer that finishes with a light peppery bite. AVAILABLE from Atlas Distributing, Burke Distributing, Commercial Distributing Company and Merrimack Valley Distributing.