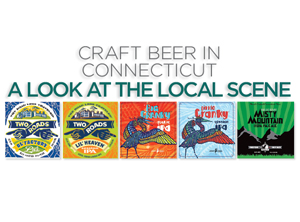 by ANDY CROUCH
Caught in the middle between New York and the rest of New England, half Yankees fans and half Red Sox Nation, Connecticut is a state with a minor identity crisis. In enduring the constant push-and-pull from Boston to Manhattan, the state has carved out an unusual geographic and cultural role. For many years, Connecticut’s split allegiances left the state lost in the ensuing shuffle along the I-95 corridor. Its local beer scene was very underdeveloped compared to other New England states. As one Connecticut brewer told me once, people are either from somewhere else, headed somewhere else, or identify with somewhere else. While the state has long boasted several excellent brewers, it’s had largely had no regionally identifiable brand or beer it could call its own. Although the geographic tug-of-war has delayed Connecticut’s breweries in cultivating their own local identity, great leaps have been made in the past decade. The state has many old, great brewpubs, which largely do not distribute beyond their own tap room or restaurant. In more recent years, a handful of breweries have established larger, regional names for themselves.

OL’ FACTORY PILS
Two Roads Brewing Company
Stratford, Connecticut
alcohol by volume 5%
A short ways off Interstate 95 in Stratford, Two Roads Brewing Company has established itself as one of Connecticut’s best breweries. In its eight years of operations under the direction of brewmaster Phil Markowski, Two Roads has produced a wide range of eclectic styles that remain approachable for novices and engaging for experienced craft fans alike. Promoting a philosophy of taking the “road less traveled,” Two Roads’s 1OO year old factory building is cavernous inside, offers a laid back vibe, and remains a great place to visit for a beer or two, especially on trips from Boston to New York. The brewery’s Ol’ Factory Pils is a delight to drink. Easy drinking enough to satisfy picky macro drinkers yet with enough character to capture the jaded craft lager lover’s attention, the beer blends tradition with American innovation to create a hybrid take on the classic style. Pours with a solid, fluffy white head on a solid base of carbonation. A light, haziness settles over the straw color. The aroma mixes pils malt, mild toasted notes and light herbal grass, and a quick zip of noble and American hops. The flavor follows with a soft pils malt character followed by a bite of noble hops, some grassy notes, and a touch of citrus. Clean, crisp, and fun to drink a few of on a summer day. AVAILABLE from
Atlas Distributing, Burke Distributing, Colonial Wholesale Beverage, Commercial Distributing Company and Merrimack Valley Distributing.

LIL’ HEAVEN SESSION IPA
Two Roads Brewing Company
Stratford, Connecticut
alcohol by volume 4.8%
The Two Roads take on the session IPA style, Lil’ Heaven focuses on three hops: Azacca, Mosaic, and Equinox. The beer pours with a slight haze and an off-golden to slightly orange hue and two fingers of froth that retains well. The aroma fills with stone and tropical fruits, light herbal hop notes, and a touch of bready malt. The flavor largely follows suit, if a bit muted, with a mixture of tropical fruits, including grapefruit and orange, with bits of pineapple and apricot added. There is a slight herbal note in the finish. Light on the palate with bursts of fruit, this is a fine drinking lower
alcohol IPA option. AVAILABLE from
Atlas Distributing, Burke Distributing, Colonial Wholesale Beverage, Commercial Distributing Company and Merrimack Valley Distributing.

BIG CRANKY (DOUBLE IPA)
Stony Creek Brewery
Branford, Connecticut
alcohol by volume 9.5%
Built in the mold of a West Coast style Double IPA, Big Cranky is the high end of Stony Creek’s series of Cranky IPAs. Offering seven different hops and at an elevated ABV of 9.5 percent with 95 IBUs, Big Cranky pours clear gold with a solid dollop of bubbly white foam that retains reasonably well. The aroma alerts you to the beer’s status as a Double IPA, with boozier notes over bready malt followed by waves of grapefruit, pine, and other tropical notes. Big Cranky’s flavor begins with a wave of sweeter malts on a surprisingly light body, followed by higher alcohol notes, then several rounds of tropical fruit advances. A mild oily slickness to the mouthfeel continues over the booze but it remains reasonably smooth and not too far in any one direction. Stony Creek offers an airy tap room and a massive deck that overlooks the Branford River. A lovely place to stop for a beer.
AVAILABLE from Girardi Distributors, Horizon Beverage Company and Quality Beverage.

LITTLE CRANKY SESSION IPA
Stony Creek Brewery
Branford, Connecticut
alcohol by volume 4.5%
Coming in at less than half the alcohol level of its bigger, bolder sibling, Little Cranky from Stony Creek still offers a reasonable hop and flavor punch in a much easier to manage alcohol level. Pours with a very light golden color and a off-white head that fades somewhat quickly. The aroma is pretty restrained, with notes of citrus and tropical fruit over mild bready malt hits. The flavor tends to be on the lighter side, reminiscent of a punched up golden ale style. Little Cranky is clean and bright, with the right balance of citrus and sweeter malt notes, and a reserved but present bitterness. Hopped with Lemon Drop and Bravo hops and finishing at a respectable 5O IBUs. AVAILABLE from Girardi Distributors, Horizon Beverage Company and Quality Beverage.

MISTY MOUNTAIN IPA
Back East Brewing Company
Bloomfield, Connecticut
alcohol by volume 7.O%
Back East Brewing was founded by two cousins in 2O12 and distributes largely in Connecticut and Western Mass. The Misty Mountain IPA pours with a slightly darker than usual amber hue and a substantial base of off-white head. The nose fills with pine and other evergreen notes, citrus, slight caramel and toffee, and finishes with some earthier hints. The flavor returns to the pine and resiny notes, balanced with some grapefruit, and then followed by a heavier wash of caramel malt sweetness than is usually popular today. Mildly bitter and balancing an ever-present sweetness, Misty Mountain IPA is a welcome respite from the hazier, juicier options that are so widely available today. AVAILABLE from Quality Beverage.