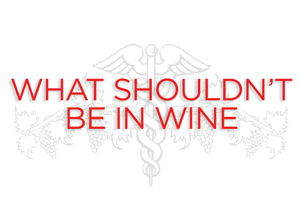 By HARVEY FINKEL, MD
Last month in this space we considered the components of wine, essentially what should be in wine or could reasonably be expected to be found in wine. Today we’ll look at what should not be in wine, but sometimes is. Further detailed scientific data is being developed by the Australian Wine Research Institute and others.

First, let’s clear away a few items we probably needn’t be concerned about any more, but which may still be mentioned now and then. All created tempests in wine glasses in the 198Os; none appear to be risks now, a result of better regulation and better technology and, mostly, better understanding. Histamine had been blamed for headaches and allergic reactions to red wine. Not so. Analyses demonstrate that not nearly enough histamine is contained in wine to come close to causing trouble. Likewise for ethyl carbamate (urethane), a potential carcinogen, and, contrariwise, once used to treat a form of cancer. Diethylene glycol (related to antifreeze) and methyl alcohol (methanol, wood alcohol) were adulterants arriving in “wine” via criminal negligence, the former to provide sweetness and body, the latter for its alcoholedness. Methyl alcohol, highly toxic and quite dangerous in quantity, is a harmless product of fermentation in trace amounts. By US law, O.1 percent is the upper limit allowed in wine, O.2 percent in the EU. Lead in wine came from now-obsolete lead-containing motor fuel exhausts, from the old-fashioned lead foil bottle capsules (wipe the lip of the bottle), and from the indelicate practice of storing acidic wine in lead-glazed or lead-containing containers, including those of lead crystal.

And we are protected by our benevolent paternalistic federal government, which enlightens us by insisting that wine bottles be labeled to warn that they contain alcohol and the sulfites, both natural products of fermentation, the latter an allergen affecting a tiny fraction of the population. Sulfites must be judiciously added in the winemaking process to ensure quality and preservation. Like most of the other substances to be mentioned herein, it is an imbalance, too much or too little, that’s to be avoided, not an absolute zero tolerance that we strive for. An element that is obnoxious in ample concentration, may contribute positively to a wine’s complexity when below its sensory threshold.

FAULTS IN WINE ORIGINATING IN THE VINEYARD Any influence on grape quality affects the resultant wine, but most of these viticultural factors are beyond our scope. It is worth noting that the ill effects on the vine of both potassium deficiency and excess are transmitted through to wine quality.

Excessive herbaceousness, leafy or grassy aroma and flavor, even unto those of bell pepper or asparagus, is imparted to wine by excessive leaf aldehydes, resulting from suboptimal ripening of bordelaise grapes. Early models of mechanical harvesters sometimes led to the same defect by conflating and crushing vine leaves along with fruit. The operative chemicals are methoxypyrazines, which can be sensed as low as one part per trillion (equivalent to one grape among a million tons of grapes).
The terrible taste of rot attacking the grapes and the olfactory taints of lady bugs and stink bugs crushed with the grapes could render wine undrinkable.

OXIDATION A common mechanism of wine spoilage is oxidation, especially of white wines: darkening, taking on an aroma reminiscent of Madeira or Sherry (but not in a good way), accompanied by loss of fruitiness and freshness, and replacement of vinous character by the flat notes of oxidation. The process may begin as soon as the grapes are crushed. Vigorous work, therefore, is necessary to exclude oxygen at all stages of vinification. Premature oxidation plagued white Burgundies in particular from the late 199Os through the early part of this century. Its cause was debated. It apparently has been much reduced. Partial oxidation of ethanol yields acetaldehyde, in controlled quantity a desired component of some Sherries, gratis their flor. Taken to extreme, ethanol is oxidized to acetic acid, the essence of vinegar. The formation of acetic acid (volatile acidity) and related compounds may be driven by invasion by microorganisms.

Cleanliness is the first line of defense against wine oxidation and other ills. Among additional practices that reduce the risk of oxidation and other wine faults are early use of sulfite, keeping wine pH low, minimizing the concentrations of residual sugar and malic acid, clarification/filtration, early racking.

Reduction, the reverse of oxidation, and much less frequent as a defect, may lead to the emission of the unpleasantly smelling hydrogen sulfide (rotten eggs) and mercaptans (cooked cabbage, rubber, skunk).

OTHER WINE FAULTS ASSOCIATED WITH MICROORGANISMS For a time, the distressing frequency of corkiness generated an all-out search for alternative closures. This taint is irreversibly imparted to the innocent wine by the cork, once equally innocent. It is thought that chlorine-bleach treatment under the influence of molds leads to the formation of 2,4,6-trichloroanisole (TCA), a highly potent compound that flattens the wine’s bouquet and taste at low concentration, then adds its own obnoxious musty odor at higher. When the taint is subtle, the wine rather than the cork may be unjustly blamed. TCA and related taints can rarely affect wooden winery buildings, shelving, even plastics. Changes in processing have reduced, but not eliminated, the risk of corkiness.

Brettanomyces, also known as dekkera, is a yeast whose horsey or otherwise aroma may add pleasant complexity in very small doses, but is clearly a defect when its presence is more than subtle. Like most of these, it is easily prevented by the use of sulfur dioxide.

The wrong sort of bacteria conducting malolactic fermentation often generates off-flavors, including the mousiness of certain nitrogenous compounds and the excessive buttery character of diacetyl. Sorbic acid, sometimes added to wine as a yeast-inhibiting preservative, may be acted on by lactic bacteria to evoke an odor resembling crushed geranium leaves. Sorbic acid itself may be smelled by sensitive individuals, to their dismay.

VISIBLE FAULTS What may be seen as abnormal may not adversely affect wine. Tartrate crystals, for example, are odorless, tasteless, and harmless. A few carbon dioxide bubbles in a still wine, especially if it’s white, may add to its freshness, but more suggest unwanted persistence of fermentation in the bottle. Haze, cloud, or ropiness may indicate infection of the wine. Browning of wine is a sign of oxidation, expected to a degree with aging.

ENVIRONMENTAL TAINTS Vines do not grow in bubbles. They, and the wines they yield, are influenced by what goes on around them. Chemical spills in the vicinity of vineyards, vinification, or wine storage may lead to noticeable contamination. Smoke from a nearby fire will taint wine. The volatilizing oils of adjacent eucalyptus trees have been known to show up in the aroma and taste of wines as mint or eucalyptus, although such notes may be generated by fermentation of some varieties.

Most lapses from wine quality are probably caused by lack of skill, of resources, of integrity, of luck, or of sound, ripe grapes. Technical faults have become increasingly infrequent.