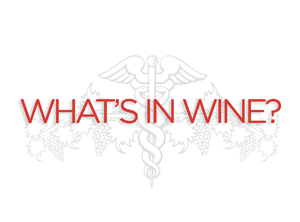 By HARVEY FINKEL
We have been enjoying wine for a very long time, perhaps 9OOO years. Its sensual and spiritual enrichment of our lives was probably noted from the beginning. It seems, though, the emphasis has changed, now largely focusing on the health effects of moderate consumption, perhaps unfortunate, for, according to Ecclesiastes 9:7: Go, eat your food with gladness, and drink your wine with a joyful heart, for it is now that God favors what you do.

Moderate drinking’s influence on health and longevity is positive, chiefly in the reduction of our most frequent cause of disability and death, the cardiovascular devastations of atherosclerosis. Benefits are also accrued by reductions of dementia, diabetes and its complications, osteoporosis, and other maladies. Such salubrities were noted in the Bible, by the ancient Greeks, including Hippocrates, and by a series of sages down through history. Since 1926, scientific observations have increasingly confirmed folk wisdom in the concepts of the J-shaped curve and the French paradox, and for the last 35 years the scientific medical literature abounds with a growing mountain of reports of both epidemiological observations and, in lesser numbers, laboratory research confirming moderate drinking’s healthfulness. Regular consumption, moderate quantities, of wine especially, particularly red wine, and drinking while eating appear to be healthiest. Binge drinking without food is very unhealthful.

The health benefits of wine are likely engendered by its contents of alcohol and antioxidant polyphenols. Drinking’s general adverse effects are solely due to alcohol, are dose related, and are fraught with the great burden of neo-prohibitionism, which, in its blindness to nuance, cannot accept that any quantity of alcohol can be beneficial, no matter how small, in whatever circumstance. No one disputes that alcohol in excess is harmful, medically and socially. Excessive consumption is associated with increased risk of liver and aerodigestive cancers, the latter especially in smokers, and dire disorders of the heart, the brain, the liver, and other organs. Moderate consumption may be associated with increased risk of colorectal cancer in folate-deficient individuals and of breast cancer in folate-deficient close relatives of those with breast cancer. But the net effects of moderate drinking are clearly favorable. While it is the combined effects of alcohol and the polyphenols that give wine its healthfulness, correlated lifestyle factors must not be forgotten.

We often wonder what this fascinating stuff, wine, is made of. What’s in wine? That happens to be the main title of an informative medical article from Canadian and Argentine researchers, the front part of whose title I have borrowed and the contents of which I have reviewed and augmented (Haseeb S, Alexander B, Lopez Santi R, et al. What’s in wine? A clinician’s perspective. Trends Cardiovasc Med 2O19;29:97-1O6). Let’s see what’s in the typical bottle of yeast-fermented grape juice, concentrating on the usual table beverage. Sparkling wines contain surplus carbon dioxide. Fortified wines have added alcohol, usually in the form of grape brandy. Flavored wines are beneath notice.

Of the roughly 1OOO identified components of wine, the largest fraction is water, the near-ideal solvent, more than 😯 percent of wine.

Next is alcohol, ethyl alcohol (ethanol), usually between 9 and 15 percent by volume of non-fortified wine, 18-22 percent of fortified wine. There has been a trend toward production of increasingly alcoholic wines in recent years, likely in part due to climate change-enhanced ripening. Ethanol improves stability of wine, adds to the sweetness of taste and the fullness of body, and enables other qualities. Being wine’s only potentially toxic component, it is the one used to guess at safe limits of consumption. The American Heart Association and the US Department of Health and Human Services have declared similar guidelines: Men may prudently consume up to two standard drinks per day, women just one. A standard drink is defined as 4 or 5 ounces of wine, 12 of beer, or 1.5 of 8O-proof spirit. No nuances related to type of beverage, pattern of drinking, or individual factors are considered. The liver is the canary in the coal mine of drinking, the body tissue most sensitive to injury from alcohol. Liver experts tell us that this large organ can tolerate with aplomb up to 14 ounces of wine daily. There are, of course, individual variations. The trace amounts of other alcohols often found in wine are, as far as I know, of no significance.

The most commonly consumed table wines are dry, i.e., not sweet. The sugars in the foundation grape juice were chiefly glucose and fructose, with tiny contributions from others. Grapes, one of the fruits richest in sugar, contains at ripeness 2O to 25 percent sugar. The yeast-conducted fermentation converts almost all the sugar, if allowed, to alcohol, carbon dioxide, and heat. The usual wine yeast species are strains of Saccharomyces cerevisiae, closely related to bakers’ and brewers’ yeasts. Others often participate. Alcohol remains an integral part of the wine. I know of no satisfactory dealcoholized wine. The carbon dioxide blows off, unless captured by one technique or another for sparkling wine. Should the fermentation go to completion, the resulting wine would contain less than O.4 percent sugar. To obtain sweet wine, either fermentation is stopped short of completion or sugar in some form is added.

I have encountered more than once, with embarrassment for the profession, physicians mistakenly advising diabetic patients to avoid any wine, “because it’s loaded with carbohydrates.” Au contraire: the typical table wine contains almost no carbohydrate. Both the American Diabetes Association and diabetes specialists endorse that diabetics are tolerant of, likely even benefit from, moderate drinking, as long as they eat while they drink (to avoid hypoglycemia). Dry wine’s modest complement of calories is provided by its alcohol, seven calories per gram, 87-124 calories per glass. Wine consumption is not associated with weight gain. This is almost as true for off-dry wine, even sweet wine. Nor is wine a ready source of nutrients, such as iron or vitamins.

Polyphenolic compounds, although minor components of wine in terms of concentration (2O-2OO mg percent), have been receiving a large share of attention because of the health-giving properties attributed to some of them. Derived largely from the grape skins, therefore of considerably higher concentration in red wine, which is fermented on the skins, than white, these “phenolics” provide antifungal protection to the grapes and color, tannins, and elements of aroma and taste to wine. Anthocyanins are the red and purple colorants. Minor fractions may come from oak barrels, even from corks. The postulated properties of polyphenols in the drinker are the foci of many medical studies. These compounds, perhaps most famously resveratrol, are believed, in concert with moderate quantities of alcohol, to enhance health and longevity via several mechanisms. They are believed to act as antioxidants, retard excessive blood clotting, reduce cardiovascular disease, such as heart attack and stroke, protect against diabetes and dementia, inhibit cancerous growth, and have other wonderful attributes. Although much supportive evidence has been uncovered, the studies are by no means complete. Even the bioavailability of polyphenols in sufficient quantity to matter is an unresolved question.

The acids of wine are important to ensure its longevity, protect against microbiological spoilage, enliven its color and flavor, and provide tartness and balance against other components. Flabby-tasting, uninteresting wines result from insufficient acidity; tart, meager wines from too much. Tartaric acid is the signature acid of grapes. The potassium salt of tartaric acid, potassium bitartrate (cream of tartar), may, especially in the cold, precipitate to form tasteless and harmless crystals in your wine bottle. Malic acid is the second prominent acid. Also present are lactic, succinic, and citric acids. The bacterially mediated conversion of sharply flavored malic acid, characteristic of green apples, to mellower lactic acid, known as malolactic fermentation, is often fostered by winemakers. Like the addition of sugar, acidification, sometimes legal, must be done with a delicate touch. As for all of wine’s components, harmonious coexistence is the goal.

Amino acids and other nitrogen-containing compounds derived from the dead yeast cells, the lees, though present in vanishingly small quantities, may impart some of the characteristic flavor components of sparkling wines.

An essential component of fizzy wines, partially or fully sparkling, carbon dioxide is deliberately included in low concentration in some still white wines to enhance aroma and taste. Some Vinho Verdes and Muscadets, particularly among the latter bottled sur lie, come to mind. I also recall a famous Mosel producer who favored this practice.

There are many components to the smell and taste of wine, some unidentified. Among those we know are esters, formed by the chemical combination of organic acids with alcohol. Fermentation esters produce the fruity aromas of wine. The process of esterification is what causes wines to taste less acidic as they age. Interactions among alcohol, organic acids, esters, and water with time give changes that may be observed in a wine’s aroma and bouquet as it ages. Terpenes are another group of such odorants, characteristic of Muscat, Gewürztraminer, and Riesling.

Any number of flavor compounds, volatiles of varying presence in the diversity of grape varieties, influence aroma and bouquet, even in tiny concentration. Many of these remain unidentified. The Australian Wine Research Institute is engaged in defining dozens.

Glycerol, a minor product of fermentation, may impart minor contributions of sweetness and viscosity. Colloids are polymerized substances that, in appropriate concentration, contribute viscosity and astringency. Both these may be part of infection with the noble rot, Botrytis cinerea, which can render some wines honeyed nectars.

Some components of wine may have little or no organoleptic influence, but other potential import. Just the right content of boron is needed for vine health and appears to help wine consumers avoid prostate cancer and autoimmune disorders. Excess is toxic to vine and drinker.

A harmonious balance of components is necessary to achieve success in winemaking. Even were all the ingredients known, it is extremely improbable that good wine could be concocted without grapes and yeast. We shall look at what should not be in wine next month.