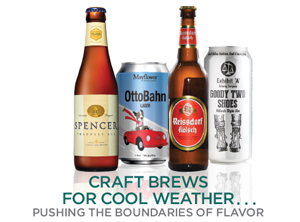 by ANDY CROUCH
The seasonal nature of beer has long been one of its great selling points. In the world of craft beer, it has been of singular value, allowing brewers to distinguish themselves from the standardized widgets of American macro beer producers. Recent years have seen differentiation and diversification move from predictable moments on the calendar to a frenetic pace of daily change. With that breakdown in traditional ecosystem of seasonality comes a bit of chaos, with no rhyme or reason as to when a beer or style is released. From the apparent insanity of it all comes the inevitable end result: freedom. Brewers are now able to produce any style or type of beer they so choose at any point during the year. Brewers have responded to their newfound freedom by pushing all manners of boundaries. Alcohol, hops, yeast, and lately, haze and the absence of bitterness. It has been tremendously entertaining watching American craft beer develop over the past decade, with all the twists and turns. In the wake of all the turn and churn, the inevitable return to the safety of balance and simpler flavors is now taking hold once again.

SPENCER PREMIUM PILSNER
The Spencer Brewery, Spencer, Massachusetts
alcohol by volume 4.7%
spencerbrewery.com
The monks of St. Joseph’s Abbey in Spencer, Massachusetts are best known as the first American Trappist brewery and one of very few that exist outside of Belgium. The brewery first released its well-known flagship beer, the Spencer Trappist Ale, in early 2O14, which followed in the traditional footsteps of other Trappist breweries such as Chimay, Orval and Westmalle. That beer is classically Belgian in nature, which deep amber hues and complex yeast and fruit aromas and flavors. The brewery has gone in a completely different direction, however, with the release of its Premium Pilsner beer. This is straight up one of the lightest colored craft beers you will ever find. It is barely straw in hue, perhaps even the lightest, dullest shade of yellow imaginable with a touch of haze. It pours with a solid, sustained white head with substantial bubbles. The aroma begins with a slight vegetal hint, redolent of European hops in an industrial lager sense. As you continue, the aroma becomes less skunky and reveals pleasant pilsner malt notes alongside some slightly toasted and biscuity hints. The flavor is a very interesting mixture of all the noted elements, at once surprising and yet totally anticipated. It can be a bit of a fun mix, beginning with a quick, clean wash of sweeter biscuity malts followed by some unexpected hop spiciness, even becoming a little herbal and grassy at times. It finishes a touch malty and sweet but remains incredibly well-balanced. The Spencer Premium Pilsner is a surprisingly full-bodied and spicy offering, very different from many American versions of the style. A very enjoyable and continental exploration of the pilsner style. AVAILABLE from Burke Distributing and Commercial Distributing Company.

OTTOBAHN
Mayflower Brewing Company, Plymouth, Massachusetts
alcohol by volume 4.7%
mayflowerbrewing.com
The Mayflower Brewing Company has been producing quality ales and lagers for more than a decade now. Perhaps best known for its excellent signature Porter, consumers should not sleep on the brewery’s lager offerings. The OttoBahn is a fun take on the Helles style employing pilsner, Vienna, and Munich malts as well as Tettnang and Hallertau hops. It pours with a big dollop of white foam and a beautiful, slightly off-golden color, very vibrant with the slightest bit of haze. The aroma is all European malts, big, juicy, sweet malts. There is a touch of grass and hay mixed in with the sweeter biscuity malts. Medium to full in mouthfeel, OttoBahn comes off as surprisingly thick, starting with that big sweet Munich Euro malt blast followed by a swirl of spicy hop notes and sweeter fruits whirling into a quick but zesty hop finish. It is also remarkably hoppy but so well balanced that only a touch of grass and earth is left on the palate. For such a sweet seeming beer, the palate is left very dry on the finish with the assistance of the zesty herbal hop notes. A very enjoyable and even beautiful beer. AVAILABLE from Mayflower Brewing Company.

REISSDORF KOLSCH
Brauerei Heinrich Reissdorf, Cologne, Germany
alcohol by volume 4.8%
reissdorf.de
Hailing from the classic brewing city of Cologne, nestled on the Rhine River in Germany’s northwest reaches, the Reissdorf Kölsch remains one of the most popular versions of the style that you will ever find. Among beer geeks, Cologne, or Koln in German, is known for largely producing only a single style of beer, the simple yet curious Kölsch (pronounced ‘kull-shh’ or ‘cool-shh’). In the early days of American craft beer, small brewers widely adopted the style in order to make a welcoming and easy drinking crossover beer for those consumers who were wary of beers with more color and flavor. Most American versions of the style are usually too light and less flavorful than those enjoyed in its city of origin. Due to the American inclination to label its blonde ales as Kolsch beers, it is easy to forget that the original German style is not meant to taste like a slightly better standard American style macro lager. Reissdorf’s version should be required drinking a few times a year for all beer lovers to recalibrate their palates. It pours with a light white head and an aroma that fills with a surprising amount of malt as it warms. There is a bready and even earthy note in the aroma balancing out the sweeter malt notes. The flavor is a wonderful balance of malt, light bite, and carbonation. Often enjoyed in smaller glasses in Cologne, a 16-ounce pounder can in the states reveals a very different beer that is perfect any time of the year. AVAILABLE from Craft Brewers Guild.

GOODY TWO SHOES
Exhibit ‘A’ Brewing Company, Framingham, Massachusetts
alcohol by volume 4.5%
exhibit-a-brewing.com
After taking over the original space occupied by the Jack’s Abby Brewing Company in Framingham, brewer Matt Steinberg focused on producing a line up of beers that a wide range of drinkers could embrace. Of the excellent beers on offer, the Goody Two Shoes, a very pleasing take on the classic Kolsch style, rose to the top for many visitors. It pours with a big pillow of white head on top of a brilliant light golden sheen. The aroma is filled with a blast of a light dough or breadiness on top of mild fruit hints and a slight spicy herbal hop aromatic. The flavor follows suit with lightly cracker like malt over mild waves of fruit and finishing with a dry mineral bitterness. Clean, pretty, and easy drinking, the Goody Two Shoes offers novice and experienced consumers something to bond over in the brewery’s tap room. AVAILABLE from Atlantic Beverage Distributors.