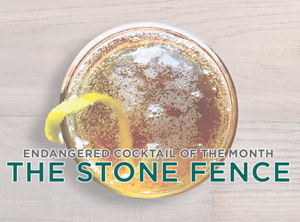 The Fourth of July is one of the great drinking holidays of summer, and while it’s certainly fun to serve guests red, white, and blue-themed beverages, a drink with true Revolutionary Era roots is sure to intrigue the history buffs at your picnic. If their numbers are few, The Stone Fence is a drink that’s easy enough to whip up on the fly.

A simple concoction of rum and cider, the Stone Fence was a staple of the Colonial Era pub. As the lore goes, it’s what Ethan Allen, Benedict Arnold and the Green Mountain Boys drank in great quantity the night before their pre-dawn capture of Fort Ticonderoga on May 1O, 1775. Allen assembled the Green Mountain Boys in the late 176Os to defend the disputed land area west of the Connecticut River known as the New Hampshire Grants from New Yorkers seeking to claim the territory (known today as Vermont). After the “shot heard round the world” and battles at Lexington and Concord, Allen and his militia took up the cause on the northern front, setting sites on the important Fort Ticonderoga. Benedict Arnold had been dispatched from Boston with official orders to capture the fort, but when he arrived in Castleton, the Green Mountain Boys were already on their way — and they made it clear they would fight for Allen or go home. Allen and Arnold were able to work out a shared leadership arrangement (which may have simply meant Allen let Arnold walk alongside him in front of the troops.)

The militia descended upon the Fort Ticonderoga in the wee hours of the morning to find a lone sentry on duty, who fled when his musket misfired. The small number of troops inside were startled awake by the invasion, themselves awaiting reinforcements from the British north, and left vulnerable to attack. Allen demanded surrender “in the name of the Great Jehovah and the Continental Congress,” and it was an easy success. The Green Mountain boys, 4OO strong then plundered the fort for liquor and other provisions.

As time marched on, the Stone Fence has evolved into a drink made with all manner of brown spirits, from rye, to bourbon, to apple brandy, and even supplanting non-alcoholic cider for a more potent brew. For a take on the classic that is both Patriotic and Vermont-centric, try raising a glass with one of Mad River Distillers’ offerings. They produce rum, rye, bourbon, and even an apple brandy made with heirloom apples, in the Green Mountain State, the heart of Ethan Allen country.

STONE FENCE
2 ounces of Mad River Maple Cask rum
(or Revolution Rye, Bourbon,
or Mad Apple apple brandy)
Hard cider
Top rum with hard cider in a pint glass.
As this is the 2O19 not 1775,
for goodness sake add ice.
A spritz of lemon, dash of bitters,
or sprig of mint garnish
will make this a delight.
Cin-cin!