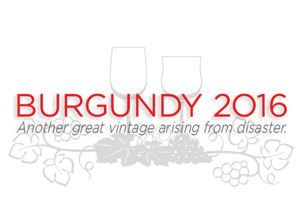 Seriously delicious. Short supply. Stable prices. These are the key phrases one took away from the early reviews of the 2016 vintage in Burgundy, now in distribution on our shores. Like an inverted phoenix, the splendor of the wines arose, not from fire, but from ice.

We’ve read the early reports, and with much anticipatory pleasure have had an opportunity to taste avatars of the vintage, most focused at a recent tasting event produced by the Massachusetts chapter of La Confrérie des Chevaliers du Tastevin Upstairs at the tempting Brasserie La Voile in Brookline’s Washington Square. Hosted by wine worthies Bruce Cole, Nathan Derri, and Frederick Ek, it displayed 16 selected representatives of various Burgundian appellations, blanc et rouge.

Let’s first examine the nature of the 2016 growing season, whose signal event was a catastrophic frost. The preceding mild winter led to a precocious awakening of the vines, thereby rendering them more than usually at risk to the ravages of frost. The temperature dived below zero on the night of April 26-27; the buds froze. The ice, remaining unthawed after the bright morning sun rose, acted as convex lenses, concentrating the sun’s rays, lasering the buds. From 50 to more than 75 percent of the crop was destroyed. There followed some mildew damage attendant upon a rainy April. Chablis, trying to emulate the plagues of Egypt, suffered a destructive hailstorm on May 13 (a Friday), golf-ball-sized hailstones stripping the vines of foliage.

The frost-engendered havoc was reported to be capricious. Massive damage was sustained in most of the major communes of the Côte d’Or, the Côte Chalonnaise, the Mâconnais, and in Chablis. Morey-Saint-Denis, Vosne-Romanée, and much of Puligny-Montrachet escaped wipe-out, but the grands crus of Puligny were not among the fortunate. Because of its later budbreak, Pinot Noir generally survived a little better than Chardonnay. Increased local humidity due to grass left long or location near the tree line was conjectured to amplify risk, as was the presence of a side valley, where cold air could pool. Cloud cover was thought to reduce risk. The second crop provided partial relief.

Early assessments of the wines were unanimous: out of almost unprecedented destruction swans emerged. Careful grape selection and winemaking produced small quantities of outstanding wines of charm and balance, perhaps even surpassing the acclaimed 2015s in some cases. The frost caused late ripening; the summer was fine, harvest unimpeded; all resulting in what was predicted to be a long-lived classic. While this seemed true for a large portion of wine-producing Burgundy, it appeared even truer for thrice-smitten Chablis, for which some have forecast historic quality coupled with tempting prices. In early returns, the Mâcons, often good values, were said to be age-worthy and, in some cases, likely to develop character above their station.

Although the demand for Burgundy continues to grow, and in spite of the small crop, prices of the 2016s were thought unlikely to exceed those of previous vintages. Much energy and cash had been spent in pursuit of the 2015s, and the succeeding 2017 vintage is reported to be of good quality and more than plentiful.

Now let’s see what this tasting reveals, an on-the-ground direct contact with the wines, and a chance to look at the market hereabouts. Internet commerce is likely making inroads in direct sales, and China is becoming a factor, at the expense of Bordeaux. Grands Crus are less on offer than usual, in part as a result of above issues, and in part due to price and frost-related scarcity. Prices seem to be a little higher than preceding vintages.

Ah, but the wines are fine, especially the whites, which combine a bright fruit-driven forwardness with a foundation that will carry them on to a graceful future of elegance and complexity. The reds are very good, and may show more later. They contain ample fruit, balancing acidity, and grace, though not the imposing backbone of the 2015s.