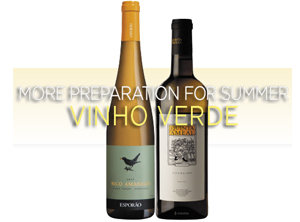 by HARVEY FINKEL
During the forthcoming summer we shall be seeking wines that are white and light in body and alcohol, that evoke citrus, and that have preserved enlivening acidity, perhaps a bit of an added tingle too. In the last issue in this space we sampled Txakoli, which fulfilled these requirements. Now, just a short way to the south and over the Spanish-Portuguese border, I give you Vinho Verde, particularly those wines informed by the grape varietal Loureiro, now the most planted of white Vinho Verde grapes at nearly 4OOO hectares.

Vinho Verde, literally “green wine,” comes in white, red, and pink. The green refers to the wine’s youthful freshness, not requiring aging, in contrast to maduro. Modern Vinho Verde of Loureiro may benefit from some bottle age. Although produced in the Minho, Portugal’s most northerly region, for centuries, Vinho Verde was demarcated by law in 19O8, and received its DOC in 1984. Rustic viticulture and vinification have since given way to modern technology. The region is subdivided into nine subregions. The wines, nearly ten percent of Portugal’s total, are 86 percent white, also a flip, are made from one or more of seven recommended and a dozen permitted grape varieties. Today’s exemplars are made wholly or substantially from Loureiro, a productive, aromatic variety. It is named for the laurel, because its aroma is said to resemble that of a laurel or bay leaf, but the wine also suggests lemon and herbs.

Loureiro is thought to have originated in the valley of the Lima River, one of the subregions within the Vinho Verde Region. The Romans believed that the Lima was the Lethe River of Greek mythology, the River of Forgetfulness, one of the five rivers of Hades. Considering the alcohol concentration of Vinho Verde Loureiro (only 8.5-11 percent), it would take a lot of the wine to induce memory loss. The sources of the wines we’re to taste today are south-facing vineyards on the north bank of the Lima River. The soil is predominantly granitic, with pockets of sandy loam. In contrast to much of Portugal, the climate is mild and moist.

Our estate in focus today, the 3O–hectare Quinta do Ameal, can trace its lineage in the Ponte de Lima district back to 171O, when it was owned by the Convento de Refóios. It was owned between 199O and 2O19 by Pedro Araújo and his family. They perfected the art of Loureiro winegrowing, now continued by the international Esporão Group, winemaker José Luis Moreira da Silva.

Quinta do Ameal/Esporão is now producing four Vinho Verdes, two distributed in our market by Aidil Wines and Liquors.