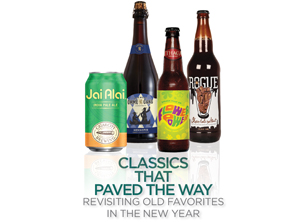 Every story in every generation eventually draws to an end, allowing a new chapter to begin. Craft beer is nothing if not a series of new stories. New brewers offering exciting and novel approaches to beer. Moving into its fourth decade of existence, craft beer is starting to see its elder generation of pioneers begin to fade into retirement or background roles. During the past forty years, we have seen a group of well-known craft beers from pioneering brewers lead the way as the industry’s front-line warriors. Beers such as Sierra Nevada Pale Ale and Samuel Adams Boston Lager were once the twin drivers of craft beer’s narrative and growth, fighting for space alongside big brewer light stalwarts in airport bars, chain restaurants, and convenience stores across the country.

Each new generation of craft beer brewer and enthusiast wants to define a new course, often leaving the older brands on the sidelines. While many older and regional brands have suffered difficulties in recent years, ranging from scattershot brand releases to full blown brewery identity crises, many have managed to continue to plot focused courses forward, often guided by their old guard flagship beers. These brewers implicitly acknowledge that their pioneering beers still have a lot to offer drinkers, especially in an era often defined by dominant and similar tasting IPAs. Experiencing the talents of new generations of craft brewers helps invigorate the industry and keep it exciting. But there remains value in stopping to recall and even revisit some old favorites from time to time.

JAI ALAI IPA
Cigar City Brewing
Tampa, Florida
alcohol by volume 7.5%
cigarcitybrewing.com
Jai Alai is a bit of an enigma these days. In a world dominated by juicy and hazy beers redolent with ultra ripe fruit notes and with a near complete absence of both malt balance and bitterness, it strikes a definitively older chord. But it is also not a traditional West Coast IPA, more of a hybrid, a bridge between the old and new styles of India Pale Ale. It pours with a striking copper hue with reddish tints and a steady crop of foam. The aroma fills not only with tropical fruits, such as mango and guava, but also, yes, sweeter malts. Not quite candy in nature but certainly bolder in malt than most anything else you will find sold under an IPA label these days. The flavor follows suit with a quick burst of resiny hops, some tropical notes, followed by a wash of sweeter malts and finally a solid smack of assertive hop bitterness. Despite its substantial weight at more than seven percent alcohol, Jai Alai remains balanced between all the elements and easy to drink on the palate. AVAILABLE from Craft Brewers Guild, L. Knife & Son and Seaboard Products Company.

HENNEPIN
Brewery Ommegang
Cooperstown, New York
alcohol by volume 7.7%
www.ommegang.com
Brewery Ommegang is a classic American brewery that followed its heart through a thoughtful range of Belgian influenced styles. Acquired by Duvel Moortgat in 2OO3, the brewery today tends to release beers more in line with the modern craft beer drinker’s predilections, including some IPAs. But this signature offering remains a favorite for anyone who has enjoyed it. Hennepin pours with a beautiful golden color and a big billowy head of foam and possesses a litany of airy aromatic wonders, ranging from pale malt sweetness, minty touches, and a spicy character from the hops and yeast all atop a dry wheat base. The flavor is similarly dry in character, with a subtle mixture of wheat, a flash of pale malt sweetness, followed by a warming alcohol, hints of ripe fruit, and a light grassy quality that blends with the spicy yeast and hoppiness for a slightly bitter finish. Tightly effervescent and sharply structured, Hennepin sets the standard for American versions of the classic Saison style. AVAILABLE from Craft Brewers Guild.

FLOWER POWER INDIA PALE ALE
Ithaca Beer Company
Ithaca, New York
alcohol by volume 7.2%
www.ithacabeer.com
The Flower Power India Pale Ale was one of the early East Coast entrants into the American hops race of the early 2OOOs. With a deeper golden hue and a sturdy base of off-white head, the nose begins like a fresh hop beer. Extensively dry hopped, Flower Power gives off big grapefruit and pineapple notes mixed with some tropical fruits over a solid, lightly sweet malt base. Brewed with a blend of Simcoe, Centennial, Cascade, and Ahtanum hops, the flavor starts with a mix of pine and citrus notes before giving over to a rinse of lightly sweet malts before balancing out through a surprisingly bitter finish. At more than seven percent alcohol, Flower Power is a bit of a banger. Despite this, it remains strikingly balanced and easy to drink over a few rounds. In a nod to the modern palate, Ithaca is releasing a series of Flower Power variants, including with more modern hop varieties, such as Galaxy, as well as cask-conditioned beers with additions such as blood orange, grapefruit and Ithaca Taproom Farm grown habenaro peppers. AVAILABLE from Burke Distributing, Colonial Wholesale Beverage, Girardi Distributors, Merrimack Valley Distributing and Quality Beverage.

CHOCOLATE STOUT
Rogue Ales
Newport, Oregon
alcohol by volume 5.8%
www.rogue.com
A predecessor to the modern pastry stout, this Stout is a throwback to a time when chocolate beers did not have to include full pies or cakes tossed into the brewing system. Brewed with rolled oats and chocolate, this beer pours jet black in hue with a big, thick mocha colored head of foam. The aroma mixes sweeter milk notes over dark and semi-sweet chocolate, not cloying in nature but balanced. The flavor boasts repeated rounds of chocolate, starting with a creamy wave of semi-sweet chocolate followed by a light alcohol bite and finishing with only a touch of bitterness. A mellow and well-balanced beer, this full bodied Stout delivers a dessert like experience without the overwhelming sweetness that comprises so many similarly themed beers today. AVAILABLE from Craft Brewers Guild.