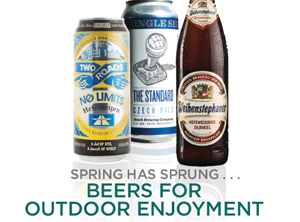 By Andy Crouch
There’s something about a beer garden. The communality and conviviality, the open air, the slowing of time to allow for a beer or two surrounded by good friends and laughs. A familiar sight in many countries around the world, from Europe to Asia, beer gardens have been slow to catch on in the United States. Despite our avowed love for their constituent parts – many Americans make a beeline directly for the Hofbrauhaus on landing in Munich – there’s something encoded in our antiquated, Victorian DNA that disdains public acts of drinking.

Consuming a beer in public is usually illegal in the States, often resulting in a fine or even arrest. The few places in the United States that have adopted public drinking have become obvious outliers – think Bourbon Street or Las Vegas – anomalies that often serve to undermine the case that adults can be trusted to have a beer or two in public without acting the fool. This has led to the hiding of public drinking, whether in the obvious red Solo cup, a koozie barely covering the label, or the pour it into another bottle, can, or container trick. Forced into surreptitious circumstances, we have long equated the consumption of alcohol in public with the very different state of being publicly intoxicated. Drinking a beer in public? You must be drunk or trying to get drunk. And you must be stopped.

Instead of embracing the beauty of public and outdoor drinking, Americans have largely relegated the consumption of alcohol to bars, implicitly marking them as dark dens of adult iniquity. And more recently, there has been a strong trend towards requiring purveyors of alcohol to require imbibers to consume a meal if they want to enjoy a beer, further alienating the concept of drinking for its own sake. We’re starting to see some pushback from these environs for public drinking, largely led by the efforts of small brewers. As demonstrated by the advent of the tap room trend, people want new opportunities and locations in which to enjoy drinks with friends. With taprooms, the drive was to connect with the place where their beer was made. Similarly, beer gardens satisfy a long suppressed hunger for open-air forums of public fun. No longer hidden in back rooms away from the public eye, communal tables filled with cheery, friendly drinkers clinking glasses spread over public spaces is changing the American perspective on public consumption.

Small brewers are leading this charge more out of necessity than a desire to run their own bars. With nearly 7OOO breweries operating around the country, competition for shelf space and tap handles is beyond fierce, it’s near pointless. Any gains a brewery achieves one week will likely be knocked out the following week by another upstart brewer. In light of such challenging circumstances, small brewers decided not to play that game. Instead, they opened their own spaces, taprooms, and they became wildly popular with consumers. Now these same brewers, unrestricted by the conventional wisdom of old, are breaking barriers and convincing their localities that consumers want to drink beer in public squares, parks, and even under-used parking lots. As with the food truck movement, only tradition restricts our future enjoyment of beer in public spaces. We’re quickly learning that treating adults like adults can work and that Americans can responsibly drink alcohol in public spaces. Whether in the form of pop-up beer gardens or more permanent spaces, let’s hope that craft beers continue to teach Americans that beer needn’t be banished to dark spaces but has a place in the public eye. With the advancing of warmer weather, let’s consider some perfect outdoor beers.

NO LIMITS HEFEWEIZEN
Two Roads Brewing Company
Stratford, Connecticut
alcohol by volume 5%
tworoadsbrewing.com
Two Roads Brewing made a name for itself before opening with the announcement that brewer Phil Markowski would be a partner. Long a brewer of classic styles, sometimes with a twist, his version of the classic German hefeweizen style does not disappoint. The beer starts with a slightly light dollop of white foam, a touch less than you usually see with the style. Amp up the speed and tenacity of the pour and the foam agitates to life. The classic hazy golden hue gives the first indication of the style followed closely behind by the aromas of banana, clove, wheat, and yeast in the nose. The phenolics here are a bit tame compared to some German examples but there is a fun liveliness to it, mixed with some vanilla and other fruit hints. The flavor continues with a quick bite of spiciness followed by some sweet fruit and wheat notes and finishing with a touch of carbonation bite and some lean banana notes. A reliable choice that is often available in some surprising bars and restaurants. Available from Atlas Distributing, Burke Distributing, Colonial Wholesale Beverage, Commercial Distributing Company and Merrimack Valley Distributing.

THE STANDARD
Notch Brewing Company
Salem, Massachusetts
alcohol by volume 4.4%
notchbrewing.com
Pouring with a slightly hazy off-orange golden color and a decent whip of white foam, Notch’s Standard is one my go to summer beers when I visit the brewery in Salem. The aroma of this Czech pils is a beautiful mixture of sweet and bitter, with solid malt notes hovering above a reserved sharpness. The first sip is very smooth before giving way to successive washes of lightly sweet Czech malt followed up by a long cascading wave of earthy bitterness. There is a fullness of body to this beer that those in the know would attribute to the hotly debated mysteries of double decoction brewing. The Standard is full-bodied yet refreshing and sweet but also balanced by an earthy, attention grabbing bitter finish. I’d like to see this beautiful yet challenging to brew beer become a year rounder for Notch with some wider distribution. Available from Atlas Distributing and Colonial Wholesale Beverage.

WEIHENSTEPHANER
HEFEWEISSBIER DUNKEL
BAYERISCHE STAATSBRAUEREI WEIHENSTEPHAN
Freising, Germany
weihenstephaner.de
alcohol by volume 5.3%
One of the world’s best pedigreed breweries, Weihenstephaner does not mess around when it comes to brewing beers that just scream out to be served in the summer. Its hefeweizen is perhaps the great classic of the style. But if you are interested in a fun departure from the more traditional, Weihenstephaner’s dark weiss beer is a great summer offering. The beer has a bit of a dull, murky off-brown hue that does not sing like the usual luminescence of its pale hefeweizen sibling, but there remains some charm in this iced tea looking beer. Pouring with the usual boastfulness of bright white foam cap, the Hefeweissbier Dunkel cheers on outdoor drinking with panoply of engaging aromas, ranging from bread to banana and clove to caramel and dark candied fruits. A quick bite from carbonation is followed by waves of wheat, banana, clove, sweet dessert cake, and some spiciness to clean everything up. Beautifully balanced, the dunkel weiss beer is a nice break from the usual hefeweizen experience. Available from Atlantic Beverage Distributors and Craft Brewers Guild.