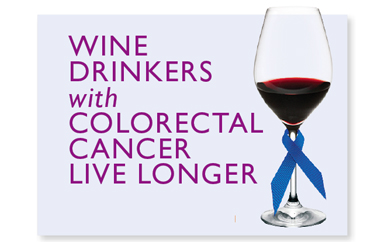 by HARVEY FINKEL, MD
THE RISKS AND BENEFITS of alcohol consumption vis-à-vis cancer remain murky, confusing, and conflicted.  We all can agree that heavy drinking is unhealthy, and most believe the great weight of scientific evidence developed during the last 3O years strongly suggesting light or moderate drinking is healthful, especially if consumption is with meals and not in binges.  It seems likely that wine is more salubrious than other kinds of beverage alcohol.  Though not limited to cardiovascular health, the preponderance of drinking benefits is manifested as reductions in the frequencies of and deaths from heart attacks and strokes.

The effects of drinking upon the risks and prognosis of cancer are particularly controversial.  It is clear that abusive drinking increases the risk of liver cancer and, especially in concert with tobacco, of aerodigestive cancers (of mouth, throat, larynx, esophagus).  Breast cancer appears to maintain a mixed relationship with moderate drinking, perhaps because, in part, it is likely a set of diseases, rather than one.  A number of studies implicate alcohol in raising the risk of colorectal (colon, or large intestine, and rectum) cancer, though a number indicate alcohol innocent in the absence of deficiency of the vitamin folic acid.

Issues involving colorectal cancer are of vast importance.  It is among the most common of cancers of both men and women, often afflicting and killing people in their middle years.  Current statistics have revealed a distinct increase in incidence among young adults.  Two recent medical publications (Phipps, et al., in Cancer, from four centers in the US and one in Melbourne; Walter, et al., in the AMERICAN JOURNAL OF CLINICAL NUTRITION, from Heidelberg and Berlin) have reported improved survival among 8O87 patients with colorectal cancer who had been light-to-moderate wine drinkers before diagnosis, compared to abstainers and to heavy drinkers.  Once again, the J-shaped curve.  Other forms of alcohol did not demonstrate the same benefit.  As usual, smokers fared worse than non-smokers or former smokers.

The benefit, though small, was in overall survival, not limited, apparently, to effects on the cancer in question.  One immediately wonders, therefore, whether it is the general, mainly cardiovascular, healthfulness of modest wine consumption at work, rather than specific anti-cancer activity.