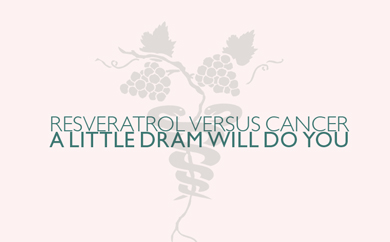 TOO MUCH of a good thing may be, well . . .too much. Sometimes less is more.  This may be the case in the red-wine compound resveratrol’s protection against cancer.

It is a biological truth, eruditely termed hormesis, that some materials exert their beneficial effects maximally at modest dosage, and are less potent or even damaging at higher concentration.  Alcohol itself exhibits such behavior.  Resveratrol, the celebrated anti-oxidant polyphenol derived chiefly from grape skins, has been reported in species ranging from yeasts to mammals to extend life span, heighten energy and fitness, reduce obesity, and combat the metabolic, degenerative, and inflammatory ravages of aging.  Among the ravages to be combated is life-shortening cancer.  And among objections voiced to the likelihood of resveratrol’s purported magic is the difficulty of absorbing into the body of sufficient resveratrol to achieve its hoped-for effects.

Now comes a study suggesting that resveratrol can reduce cancer risk in men and mice, that low doses work better than high doses, that a cancer-promoting high-fat diet accentuates the resveratrol effects in mice, and that the quantity of resveratrol required is within the capacity of what people might ingest and absorb from food and wine.
Cai, Scott, Kneight, et al., reported in the July 29 science translational medicine that, in human patients undergoing colorectal surgery who had received as little as 5 milligrams of resveratrol daily for a week, a dose one might derive from normal consumption, the compound reached its target tissues, where it enhanced biochemical defenses against cancer.  In a strain of mice with a high risk of colon cancer, especially when fed a high-fat diet, low doses of resveratrol were much more effective than very high doses, leading to 4O percent fewer precancerous polyps and 52 percent fewer cancers.

The natural tendency in applying anti-cancer drugs is to use the highest tolerable dose.  High dosage, however, may activate compounds that inhibit those involved in protection.  This study gives us cause for reflection, and for another look at drugs that seemed promising, but failed their trials.  Low doses also are unlikely to exhibit toxicity.