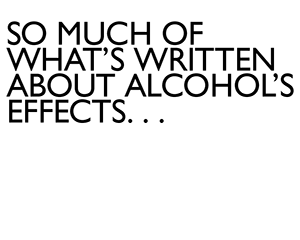 SO MUCH of what’s written about alcohol’s effects upon health is misleading. taking clues from three recent publications drawing applause for their good sense, I shall try to set the record straight.

The misinformation mostly warns of the consequences dire of consuming even drops of alcohol. The media seek sensation and simplicity. Scientists may seek advancement or to adhere with prohibitionistic zeal to a party line fearing that someone, somewhere, might be enjoying life. Some sources are purportedly august national governmental or international organizations. A few see panacea in alcohol: be suspicious of claims not backed by data and wary of perversion of statistics.

Abuse of alcohol doubtlessly impairs health and shortens life, but we are particularly concerned here with moderate consumption. Twenty-four centuries ago Hippocrates advised that alcohol’s effects were a matter of dosage, and that still holds true. Studies have long shown that consumption of up to 4O grams of alcohol daily by men does not cause sustained damage to the liver – the body’s canary – the tissue most sensitive to injury by alcohol. This squares well with the usually recommended limit of on average two-plus glasses (13 to 14 ounces) of wine per day. For women, 5O to 6O percent of that dose is safe and sufficient. The allotment is best taken regularly, and with meals. Saving it all up for a binge can be distinctly damaging.

The three good-sense articles I draw on today are: Emanuel Rubin’s “To drink or not to drink: that is the question”; Erik Skovenborg’s “Nature’s medicine?” and “Alcohol and breast cancer: reconciling epidemiological and molecular data,” by Samir Zakhari and Jan B. Hoek.

DRINKING PATTERN
AND CHOICE OF POTABLE
All binges are not equal. One current definition of binge is consumption of four or more drinks during a given session. The favored pastime of some young men – total immersion in alcohol on Saturday night with the intention of getting very drunk – is truly dangerous to health, even to life, while the usually moderate wine drinker who on occasion enjoys five or six glasses during a several-hour dinner is likely to suffer no increased health risk.

Questions of adequate absorption and of confounding lifestyle factors, however, remain to be resolved.

AGE AND DEMENTIA
Many sources have worried about supposedly frail older (over 65) drinkers’ imagined lowered tolerance. ‘Tain’t true. In the absence of a specific medical contraindication, no reason exists to curtail consumption because of age. In fact, the hearts and brains and dispositions of seniors appear to distinctly benefit from moderate drinking.

Light to moderate consumption of any type of alcoholic beverage is associated with reduction of risk of dementia, including Alzheimer disease.

HEART ATTACKS
AND STROKES
Cardiovascular disease – chiefly atherosclerosis, our greatest disabler and killer – includes not only heart attack and ischemic stroke, but heart failure, abnormal heart rhythm and limb loss. Moderate drinking considerably reduces the risks of these complications, even among those who have survived a heart attack.

CANCER
The risks of aerodigestive cancers (of mouth, throat, larynx, esophagus – especially among smokers) and of liver cancer are clearly increased by long-term excessive drinking. Moderate drinking appears to break even for most other organs, and may reduce risk for a few. Colorectal cancer risk in moderate drinkers is kept normal so long as the intake of the vitamin folic acid is adequate.

The controversial one is breast cancer. Credible reports indicate an increased risk among moderately drinking women. Other studies show no such thing. In my view the subject is murky and muddled, the conclusions conflicting and conflicted, perhaps because what we call breast cancer is really a group of variegated diseases. It should also be kept in mind that thirteen times as many women die of heart disease as from breast cancer. Thus, the undoubted cardiac benefits of moderate drinking vastly overwhelm any possible cancer liabilities.

DIABETES
AND OBESITY
Adult-onset or type II diabetes is a mean disease, often leading to cardiovascular disease, blindness, kidney failure, and infections. It is associated with obesity. The risk of developing diabetes is reduced and the ease of its control enhanced among moderate drinkers, compared to abstainers. Diabetics must remember to eat when they drink to avoid hypoglycemia.

Women who drink moderately gain less weight and have lower risk of obesity than do their teetotaling counterparts.

OSTEOPOROSIS AND RHEUMATOID ARTHRITIS
Both of these potentially crippling disorders preferentially affect women, and both are ameliorated by light to moderate drinking. In the former, bone density is improved and fracture risk reduced. In the latter, the risk of becoming afflicted is reduced, and, in those with the disease, symptoms are alleviated.

Although alcohol should be used to enrich life, not to medicate it, moderate consumption need not be feared. As Abraham Lincoln remarked in an address to a temperance group on Washington’s birthday in 1842, alcohol’s injury arises not from the “use of a bad thing, but from the abuse of a very good thing.”