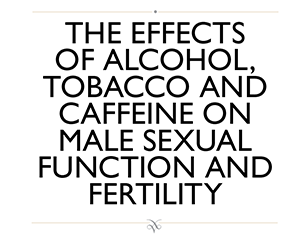 MACDUFF What three things does drink provoke?
PORTER Marry, sir, nose-painting, sleep, and urine. Lechery, sir, it provokes and unprovokes: it provokes the desire, but it takes away the performance; therefore much drink may be said to be an equivocator with Lechery: it makes him, and it mars him; it sets him on, and it takes him off; it persuades him, and disheartens him; makes him stand to, and not stand to; in conclusion, equivocates him in a sleep, and, giving him the lie, leaves him.

OF COURSE, Shakespeare’s doorkeeper was hardly an exemplar of moderate drinking. We all have heard folk tales and urban legends about what we ingest or inhale may do to our fecund functions. Well, here’s some science, presented at the 7Oth Annual Meeting of the American Society for Reproductive Medicine in Honolulu in October, 2O14. Research groups from Rochester, NY, and Boston reported in men of the usual reproductive age intriguing associations between alcohol, tobacco and caffeine use and sexual function and fertility. Drinkers were reported to have better sexual satisfaction than abstainers from alcohol. The latter had more erectile dysfunction and more frequent inability to complete intercourse. Oddly, the two groups reported themselves equally sexually satisfied. [Their partners were not polled, and type of beverage not specified.] Alcohol consumption appeared to increase couples’ chances of achieving pregnancy.

Tobacco smokers experienced, or admitted to, more sexual dysfunction than did non-smokers. [No information was elicited on the effects of the post-coital cigarette.]

Men whose caffeine intake exceeded 265mg per day (about the content of 24 ounces of coffee) were only half as likely to be able to author a pregnancy as those averaging less than 88mg (about eight ounces of coffee).

While this information may be helpful in enhancing fertility, one should not rely on its obverse.