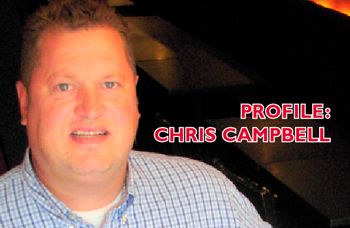 Chris Campbell became Boston oenophiles’ Robin Hood in 1993 when he and wife Diane opened the legendary Uva on Commonwealth Avenue.  Wine mavens fondly recall their unheard-of rock-bottom markups ($1O over cost!) and those mid-week Wine Bargains.  Since 2OO1, the Campbells are marching strong at Troquet, a handsome bistro overlooking Boston Common, offering their clientele about 5O uncommon WBGs, with cellar depth in big reds, and some verticals of prestige Napa boutiques or acclaimed Burgundy houses.  With a broad-based, well-chosen list that evolves as restlessly and gracefully as he roams the floor, Chris still torches the concept of gargantuan markups in favor of turning a crisp and tidy cellar.  And is this dude steadfast!  Chris hasn’t budged off his “À pied ou mort” service mantra since they opened.

BEAUNE VIVANT Burgundy in general became important to me after I spent three years over there after high school in the ’8Os.  It’s always a serious hunt to find good Burgundy; I’d say there are only two good vintages a decade, while California will have six or seven.  If you don’t stick with great years and reliable producers, you spend too much time and money trying to find the best ones.  Ponsot, Rousseau, Jadot, and Faiveley make some great wines.  In Paris several years ago, I visited lots of bistros; I like to see the trends in those places.  Everybody’s waiting for the 2OO9 Burgundies; it was a spectacular vintage, they’re the hottest wines since 2OO5.  We’re standing in line, having to buy the ’O6, ’O7 and ’O8s to get a crack at the ’O9s.  That’s a little discouraging; we haven’t even tasted an ’O8 yet.

KEEP IT BREEZY Three-star restaurants tend to be too stuffy; I’m not a suit and tie person.  I like great wines and food, but not formality.  I’ll never forget the Ritz Carlton in Naples, Florida, with my wife – must’ve been 2O years ago – celebrating an anniversary, the whole nine yards.  I had on my jacket and tie, but I was warm, hot and perspiring from a day at the beach, and the airflow in the dining room wasn’t right.  It was late on an off-night, there was only one other table of diners, so I got up to take my jacket off, and about six waiters accosted me to put in back on.  I protested: “It’s warm in here!” so they cranked the a/c, but it ruined my night.  It didn’t make any sense to me in an empty dining room.

RELAX DINERS We keep a comfortable atmosphere here, shorts and golf shirts are fine, especially in summer.  We have an open kitchen and dining room.  I wear a dress shirt, no tie, khaki slacks.  Most of our waiters have been here since we opened.  We have low turnover; I guess they like it here.  They know the wines and the cuisine, and project their comfort level to our diners.

VALUE HUNTING It’s harder now to find value wines I can price accordingly.  I really struggle to find wines I can put on the list under $4O.  The quality just isn’t there.  Châteauneuf du Papes, better Burgundies and the extravagant ’O9 and ’O7 Bordeaux vintages are the tip of the iceberg in a market where prices have gone stratospheric.  Demand is huge, so it’s harder to pass along attractive price-points to consumers.  I seek small châteaux, some St. Émilions and Pomerols.

RIVE GAUCHE Some have gone to New World profiles (California, Australia) with a saturated style, lots of new oak, like Château Pavie, Château Troplong-Mondot.  Some use Romanian oak (open-pored, strong-flavored) for they’re looking to save money, too, in these times.  I’ve stuck with more traditional left-bank wines, Cabernet-based, less new flamboyant oak, less blueberry fruit.  Pontet Canet, Cos d’Estournel, Ducru Beaucaillou, Lynch-Bages.  There’s still good value among second, third, fourth, and fifth growths.  My customers are not looking for second labels; I just got an attractive price on 2OO4 Cos and have put it on the list.

HOT SKUs Sales people keep you on tap for bin ends and deals.  At the end of a vintage, distributors are anxious to get rid of SKUs, clean out the warehouses.  They might not even know they have four, five bottles of this or that.  Some wines are so tightly allocated than when they’re un-allocated, nobody even bothers to try to sell them.  I keep in touch with all my salesmen: you can’t fall asleep at the wheel, you’re constantly searching.  This is not a museum, everything’s for sale.  If it were, I’d have my Château Petrus out there for eight grand!

TORO!  TORO!  Spain still keeps coming with values in the $2O range, like Volver and Alto Moncayo.  Toro wines are constantly improving.  Jorge Ordóñez has the best portfolio and values; if you see his name on the bottle, you’re in for a good value.
SOUTHERN POTENTIAL I don’t see any new trends, really.  Southern Hemisphere wines have been pretty intriguing for people.  I think Chile’s coming up; l like some Chilean reds.  I’ve always been a fan of New Zealand whites – Momo, for one – and now the reds and Pinot Noirs are tasting stronger.  I’m told they have the perfect climate for Pinot Noir, and it’s just a matter of time for the vineyards to mature.

CAUTIONARY TALES Some Argentine Malbec prices are getting a little crazy.  I hope what happened to Australia doesn’t happen to them.  They’re too big, too rich, too over-the-top, with prices reflected in the inflated scores of wine critics.  They’re pricing themselves right out of the market.  It’s hard to sell a bottle of big Australian Shiraz nowadays; people have a few bottles in their cellars, but they’re over it, done with it.  The Aussies have turned the corner with Chardonnay, and their current craze for unoaked is far more successful than the huge oak-bombs of a decade ago.  So they may begin to see the light on reds, and follow some Californian houses, now making Syrah in a more food-friendly Côte-Rôtie style.  There’s not a lot of food you can serve with a fat, jammy Shiraz!

WBGs We try to find values, and catch them before they change vintages on me.  Some bigger companies don’t give you a heads-up, they expect us to keep on top of it.  So I’ll have an ’O7 on the list and they bring in the ’O8, but I haven’t tasted it yet.  Happened to me on a Friday night, with a solid ’O5 Côtes du Rhone I had on the list.  They deliver the ’O6 and – whoops.  That’s a little discouraging.

CHILL IT I’m a stickler for proper serving temperatures.  Troquet serves all white wines by the glass at 45°F, all reds at 58°F.  It’s been a rule of thumb for 15O years that red wine should be served at room temperature, but back then, room temperature was 55°.  Many people have grown accustomed to drinking their red wine at 75° or 8O°, so it’s an uphill battle – but it’s worth it.  I hold blind tastings all the time, and I always show two of the same red wine at different temperatures (55° and 75°).  Nobody ever realizes that they are the same wine!  Ninety-five percent prefer the cooler wine and are shocked at the difference.  â€¨â€¨

FULL LICENSE It’s had some effect on the Friday/Saturday night crowd that likes their Cosmo or martini before dinner.  My regular fine-wine-drinking clientele might have an Armagnac or Single Malt after dinner, so the license hasn’t had that much effect, to be honest with you.  Most don’t follow a mixed drink with a fine Burgundy.  Our street-level bar, with seven seats, mostly attracts diners who’ll have a few 2 or 4 ounce tastes or move on to a bottle.  We’ve just hired only our third bartender since we opened: the first got her dream job at ESPN and the next was in a car accident this summer.  Filling in at the bar, I note what people order – a few martinis and cocktails, but mainly wine.  Restaurants like Drink and Eastern Standard take their drinks list very seriously.  If we went that route and advertised it – tent cards? – it might make a difference.  I’m not keen on hard alcohol, because 8O-proof vodka numbs your palate.  But . . . we are a full service restaurant, and we do offer it.
â€¨
BOOZE + BREWS Cristiana Potato Vodka finds favor with a few regulars.  Hendricks and Raj are popular gins.  Maker’s Mark’s a bourbon we do well with.  We sell just enough grappa to keep it in inventory.  Our short beer list has Belgian Ales (Chimay, others) and domestics (Sierra Nevada Pale Ale, Anchor Steam); Heineken/Amstel’s our “Bud”.  No taps: I’m not a fan – there’s too much margin for error, wastage, lots of ‘samples’ go out.  Line maintenance is tough, and cleanliness is an issue: we don’t want fruit flies.
LE PATISSIER Sarah Woodfine-Taylor is our talented pastry chef.  It’s a pre- and after-theater thing.  Some diners like to finish up in a new atmosphere.  Some like to just come in for dessert.  So we’re using what used to be our back bar creatively.  Our sweet list that accompanies her pastries has half-bottles and pours of Port, Tokay, Riesling, and Sauternes.

BIN END SALE I did my first major cellar clear-out over the summer since Troquet opened.  I sold my last bottles of some 4OO wines – off my bottom shelves, where I put ’em and tend to forget ’em – at deeply discounted prices.  When I’m down to my last bottle or two of a wine, I can’t keep it on the list.  And I can’t hand sell it either.  There are just so many I can keep in my head, and the clutter was getting disturbing, so I took drastic measures.  The response was pretty amazing.  I got the word out through email, Twitter, Facebook – and a lot of word-of-mouth.

SOMMELIER ET POMPIER Service at night is easy; that’s the part I love – despite running up and downstairs 2O to 3O times.  The hard part is dealing with the stocking and maintenance: fixing a fridge, taking phone calls, talking with salespeople, directing deliverymen, or covering for any of my 26 employees.  And dealing with whatever comes up in the daily grind.  When I pull the car into the lot at 9am every day, I ask myself, “What fires am I gonna have to put out today?”

PHILOSOPHY The most important thing is to be here all the time.  People need to see a familiar face when they walk in the door.  In the first three years, I only missed three nights.  My chef/partner Scott Hebert and I are here every day, except Sundays and Mondays when we close.  Our customers want accountability; they want to experience the service that they deserve.  The bottom line is that if we’re not here, we won’t open.  It’s as simple as that.