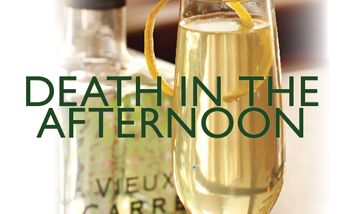 DEATH IN THE AFTERNOON

COCKTALE Sometimes it’s the flavor that draws you in to a cocktail’s mythical orbit, sometimes it’s the lovely hue.  In some cases, curiosity is piqued by a beverage’s name.  Death in the Afternoon, for example: what in the heavens could that drink taste like?  What could a cocktail with such a name possibly contain?
Leave it to Ernest Hemingway to slap such a chillingly intriguing name on a drink (and a novel.)  The beverage was allegedly born after he and three officers of the HMS Danae spent seven hours overboard trying to get a fishing boat off a bank where it had blown in a storm.  He subsequently submitted the recipe to a humorous book of celebrity cocktails, So Red My Nose, or Breath In the Afternoon, edited by the Sterling North and Carl Kroch, published in 1935.
The drink is an unusual one, to be sure, and was not possible to recreate in the States for many decades, owing to the absinthe ban.  Legal once again, we enjoyed sampling this drink with the robust Vieux Carre Absinthe, a brand distilled in Philadelphia and named for New Orleans’ French Quarter.  Jade Liquors’ Lucid Absinthe is also a delight, and if you can get your hands on a bottle of their Nouvelle Orleans, do yourself a favor and combine it with some fine Champagne for a fancy take on this cocktail with a morbid moniker.

DEATH IN THE AFTERNOON
As imbibed by Ernest Hemingway

pour one jigger absinthe into a
Champagne glass.
add Champagne until it attains
the proper opalescent milkiness.