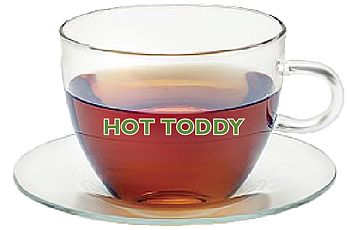 COCKTALE As the temperatures begin to sink in the fall, the thought of ice in your cocktail can just seem cruel.  The ladies of LUPEC Boston are hardy New England broads, and when it comes to winter tippling, we know exactly where to turn: to toddies.

The Toddy has been tippled in both hot and cold form since the eighteenth century.  The basic formula consists of spirits, sugar and water, making it a precursor to the formula for the modern cocktail, which adds bitters to the mix.  The Toddy is a close relative to the Sling, the Skin and the Sangaree (which, according to some sources, appear to be the same drink with a different name.)

The preferred base spirit for the eighteenth century Toddy depended heavily upon who you asked: “Rum (or whisky if you were out on the frontier, brandy if you were posh, applejack if you were from New Jersey, gin if you were of African or Dutch extraction),” writes David Wondrich in imbibe.  By the late 18OOs, the drink was most commonly spied with domestic whiskey as a base, and is how it is most commonly conceived today.

When served with brandy, the Hot Toddy drink was praised for its medicinal properties.  After phylloxera decimated the vineyards of France, though, many drinkers turned to using good highland single malt.  Before blended scotches erupted onto the scene in the 189Os (along with golf and an interest in all things Scottish), all scotch imported to the American provinces was the strong, smoky single malt variety, and for a time, this recipe for drinking scotch in a toddy was the tops.

combine all ingredients in a mug.
fill with boiling water.
stir until sugar is dissolved.