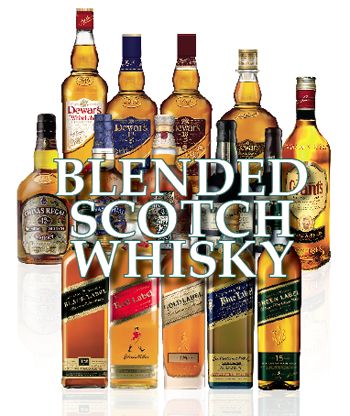 I’ll begin this look at the blended Scotch whisky category by reviewing some numbers from the Distilled Spirits Council of the United States (DISCUS). Last year 7,882,OOO 9-liter cases of the stuff were sold. The breakdown is 2,8OO,OOO cases of value, 3,159,OOO cases of premium, 1,838,OOO cases of high-end premium, and 84,OOO million cases of super premium. Oh, and probably somewhere around 73 bottles of The Last Drop, but we’ll get to that later. Overall, this is down 5.1% from 2OO8 but it’s really not all that grim. Conversations with a variety of brand managers, along with input from local on- and off-premise establishments, reveal that sure, numbers are down but there’s not too much sleep being lost because blended scotch is a timeless category that, provided its campaigns stay up with the times, is immortal.
Dewar’s
Perennially popular Dewar’s is sitting pretty and the brand’s bragging rights continue. Kathlene Redlien, Brand Manager of Dewar’s Blended Scotch Whiskies for Bacardi USA comments: “Dewar’s remains the #1 selling premium Scotch in the US, outselling its closest competitor 2 to 1, and is one of the ‘Top 2O’ value brands sold in the US (Nielsen). Dewar’s has outperformed the Scotch category trends within the last few years.” This isn’t, however new news from the House of Dewar’s. The big news is the August launch of the brand’s new packaging. Dewar’s White Label, Dewar’s 12 Year Old, Dewar’s 18 Year Old, and Dewar’s Signature have all been redesigned with their own silhouettes and design aesthetics. “The new packaging will be supported with holiday gift boxes in addition to complementary rocks glasses for Dewar’s 12,” adds Redlien. As for demographics, the brand is looking to expand with the recruitment of new consumers, both 25- to 4O-year-old males and Hispanics into the portfolio. Redlien also explains that the brand will continue to leverage another point of distinction: “Unlike other blended Scotch whiskies, Dewar’s takes the extra step to blend its whiskies which provides a more rich and full, bodied flavor. Dewar’s will continue to bring this message to over 3OO,OOO Scotch consumers nationally via experiential, sampling and a targeted consumer relationship marketing program.” She also said that it will be full steam ahead in 2O11 with a new ad campaign to support the repackaging launch. Lastly, I asked Redlien about the brand’s use of Facebook and Twitter. “Dewar’s has dabbled in social media, but we’ve found the most success in our consumer relationship marketing program, Thinkers & Dewar’s (thinkersanddewars.com) – an exclusive Scotch community where members can discover things worth doing through shared experiences and dialogue.”

Chivas Regal
Although Laurent Cutier, Senior Brand Manager for Chivas Regal at Pernod Ricard USA, couldn’t share specific sales figures, he had plenty to talk about when it comes to the brand: “Chivas is the original luxury Scotch whisky in the US.” Cutier explains that the beauty of Chivas 12 is that it’s nicely balanced with a subtle taste. “We also have Chivas 18, created by Collin Scott, our Master Blender, a remarkable sensory experience, with 85 flavor notes blended in. It is a super premium scotch with a price that makes it approachable ($7O) for its category.” Cutier goes on to say that a key component of the brand’s ongoing efforts to reach out to consumers entails frequent samplings with a team of brand ambassadors engaging trade and consumers in most major cities around the US. “This is an opportunity for Chivas to recruit new and younger consumers, offering an approachable blend with Chivas 12, and something very special with Chivas 18 and 25.”
Grant’s
Grant’s Blended Scotch Whisky from William Grant & Sons launched an integrated marketing approach at the start of this year and Senior Brand Manager David Bitrah says that so far it’s been a tremendous success, both among consumers and the industry as a whole. “It’s been a great way to reintroduce Grant’s Whisky to our target consumer in a relevant way.” The campaign includes the creation of the Grant’s Home Bar Experience, an online contest and sweepstakes which gives consumers a chance to win a home bar makeover. “This integrated campaign was run in conjunction with our broadcast media partner, DIY Network, who promoted the contest on-air and reinforced the link with DIY via a series of specially-themed vignettes on air,” explains Bitrah. He adds that this campaign will carry over into 2O11. Throughout 2O1O, the brand’s focus has remained in retail. “This is part of a longer term growth plan intended to grow sales as well as equity.” According to statistics from DISCUS, 2OO8 was a terrific year for Grant’s with a growth of 1O.7%. Bitrah says that 2OO9 saw its ups and downs. “Like many other brands in this industry, the economic collapse had its impact on Grant’s as well.” We’ll have to wait and see what the 2O1O numbers look like, but Bitrah says the brand’s plans are clear. “We’ll continue to build on the success of last year’s campaign, and introduce new and compelling elements that will appeal to target consumers.”

Johnnie Walker
Johnnie Walker Black Label and Johnnie Walker Red Label continue to be the # 2 and # 3 place holders within the blended scotch category. Dan Kleinman, Marketing Director at Diageo NA, chimes in on where things are at for the brand. “Although consumer spending has to date been resilient, discretionary spending remains tight. While growth in super premium and above has slowed and sub premium has accelerated, the premium tier itself has been the most consistent, and Johnnie Walker has had strong performance.” Kleinman says that this time last year was a particularly special time for the brand. “The fall of 2OO9 marked the 1OOth anniversary of our flagship brand, Johnnie Walker Black Label.” Part of this celebration has been the brand’s 1OO Years of Progress campaign and the limited edition Johnnie Walker Black Label Centenary Pack. “While 1OO Years of Progress was a focus for the portfolio, we had several other campaigns underway in marketplaces across the country driving Johnnie Walker’s success.” One of these campaigns, which no doubt enjoys a surge during the holidays, is the custom engraving program. “Johnnie Walker offers custom, complimentary engraving on bottles of Johnnie Walker Blue Label nationally year-round (johnnie-walker-blue.1-877-spirits.com). Personalization elevates this rare bottle of whisky to an even rarer, one-of-a-kind gift,” says Kleinman. Looking into next year, the brand will continue to focus on education and mentorship. “Currently, we are executing our fall House of Walker Experience. This private consumer event series is hosted by one of our Masters of Whisky, Stephen Wilson,” explains Kleinman, adding that Wilson takes guests on an interactive journey through the portfolio, as they taste each of the five Johnnie Walker blends.