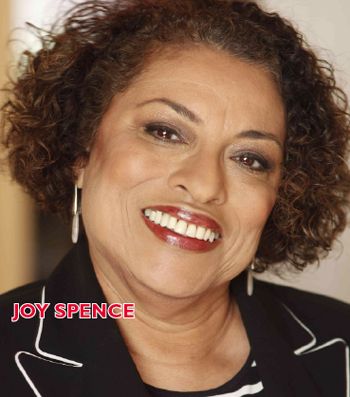 Thirteen years ago, Jamaican-born Joy Spence was appointed Master Blender at Appleton Estate, making her the first female Master Blender in the spirits industry.  A hot, heady summer night found Spence in Boston introducing her premium rums to a small audience of the press.  Rum on a steamy night may seem best suited to Caribbean adventures and Tiki parties, but Appleton Estate selected Clio, Ken Oringer’s posh flagship establishment in the Back Bay, as the backdrop for this event.

Joy Spence mixed and mingled with guests over champagne cocktails in the intimate bar before dinner.  Her smile and easy conversation gave the reception the relaxed yet elegant feel of a cocktail party.

Clio’s cool interior is an oasis of swank sophistication, a perfect setting for a lesson on Appleton Estates’ premium offerings with the trailblazing Master Blender herself.  As guests circled around the dinner table, Spence took center stage to guide the group through a tasting of her unique rums.  We noted the olive green shadow at the rim, which Spence explained is a sign of oak aging, the orange top note wrapped in molasses on the nose, and the rich vanilla, coffee, cocoa, and hazelnut that follow on the palate.  Course after course and cocktail after cocktail, these rum drinks paired exceptionally well with Chef Oringer’s intricate creations.

I caught up with Joy Spence later to learn more about her scientific roots, being a woman in a male-dominated industry, and Appleton’s sophisticated expression of rum – a spirit once claimed by pirates and sailors, now poised to rival small batch bourbon, fine cognac and single malt scotch on the premium spirits shelf.

SHE BLINDED ME WITH SCIENCE
The science bug bit Joy Spence when she was just thirteen-years-old leading to a career as a chemist, then as a rum blender.  “Will you believe it was my chemistry teacher who sparked my interest?” she laughs.  Spence used to stay after school in the evenings to help her teacher set up labs for senior students and grew fascinated with the subject.  Before long she was two years ahead of her peers in chemistry, often doling out advice to senior students.

When that influential chemistry teacher passed away tragically, Spence made a declaration for success: “It was very, very, very heartbreaking for me, so at that point I made a vow to become the greatest chemist I could be because I knew it would make her proud.”  Spence never looked back.  She became a chemistry lecturer after college, and then pursued a Master of Science degree in Analytical Chemistry at the University of Loughborough in London where she scored the highest exam grades ever achieved by a student – a record that still stands today.

FROM ACADEMICS TO SPIRITS
Seeking diversity in experience, Spence left her academic career to join the spirits industry in 1979, starting as a Research and Development Chemist at Estate Industries Limited, producers of Tia Maria Liqueur.  At the time, it was a “one-product operation” located adjacent to Appleton Estate.  “I am great at multitasking,” says Spence.  “I like to be doing twenty things at the same time – don’t just give me one thing to do because I’m going to finish it very quickly and get very bored.”  Spence grew so restless with just one position she quickly took on a second at Tia Maria: “In the morning I was doing chemistry and in the evening they sent me to work with the marketing team doing public relations.”  But Spence always had an eye on the constant bustle at Appleton Estates: “I used to sit and look across the fence and think, oh my gosh, so many tankers rolling in and in and out!  That place seems very interesting.  So I sent in my resume.” Spence was hired as Chief Chemist in 1981.

MASTERING THE ART
OF BLENDING
Once at Appleton, Spence worked very closely with Master Blender Owen Tulloch who taught her the complex art of blending.  Aloof and intimidating to most, Tulloch nonetheless formed a special bond with Spence and she cites him as an inspiration to this day.  She took over as Master Blender when he retired in 1997.  “When I was appointed master blender thirteen years ago and we realized that there were no other females on the world scene, we thought, ‘Oh my god, this is awesome!’  It’s really a male dominated industry, the spirits industry.  Positions are usually handed down from father to son in a sort of family scenario.  I thought, ‘Here I am in Jamaica, just a little island in a big world, and I’m the first female master blender.’” Since then others have emerged.  “I think I actually broke the glass ceiling and paved the way,” say Spence.  “All of a sudden, out of the woodwork a few years later, a woman master blender was appointed in Guatemala and another one in Scotland,” with hopefully more to come.

WOMEN’S WORK
After being named Master Blender, Spence was easily accepted in her new role: “I was in the industry for a long time so the people knew my skills and what I was capable of doing.  It wasn’t a surprise.  I was readily accepted and I really didn’t have any problem at all.”
Outside the industry is a different story: “Most people think I am in marketing and they laugh when they find out I’m actually a rum blender,” says Spence with a grin.  “Recently, at customs in Miami I told the officer what I do and he said ‘Oh, sure.’ I said, ‘you don’t believe me, right?  I know because 9O% of people don’t believe me when I tell them what I do.’” This is nothing new to Spence: during a research trip to New Zealand many years earlier, customs officials mistook Spence for her mentor’s wife.  She recounts these stories of shock and disbelief with humor and levity: “You just have to roll with it.”

“My advice for women in the industry is to, first of all, be technically sound,” says Spence.  “Don’t be intimidated being a female, and once you can prove that you’re skillful, the world is your oyster.  You need to be super confident because you know what you’re worth.”

SUCCESSFUL BLEND
So, what does it take to be a master rum blender?  “A chemistry background, great sensory skills, excellent knowledge of the rum manufacturing process, and great creativity,” according to Spence.  Once upon a time, master blenders were hidden away, left to work their magic in labs.  Times have changed, says Spence: “A master blender no longer sits in a room behind a little desk, so being media savvy is very important.  The whole paradigm has shifted.  Master blenders must now be ready to function as the face of their brand.

ONE PART SCIENCE,
ONE PART MAGIC
Over 25O,OOO barrels of rum are currently aging at Appleton Estates, each of which must be constantly evaluated by Spence and her 6O-person Quality & Assurance team.  This elaborate matrix is tracked via computer system making each barrel traceable in the estate’s multiple warehouses.

Blending these is a calculated process that starts with chemistry, but there’s still no substitute for the sensory analysis, says Spence: “Sometimes the chemistry can be perfect according to our specifications, but the sensory check will be flawed.  This is because the nose can detect many more aromas than the machine, and for this reason, sensory analysis usually overrules chemistry.”

“There will always be a human hand in blending.  They have not yet been able to find a machine that can replace that human quality,” says Spence.  For Spence, when it comes to the final product, “it’s very difficult to tell where the science stops and the art begins.”

RUM OF THE FUTURE
Appleton Estate has been a leader in premium rum, a market segment that continues to grow significantly as the overall rum category remains flat.  “I see in another three years, four years, a big boom,” says Spence.  With Appleton no doubt leading the charge.  “What we are trying to convey is that the category has great range,” she says.  It’s premium and of course can be enjoyed in a nice, relaxed setting.  But sophistication is the name of the game.”
“We want the brand to be aspirational.” Coming from Spence, a woman who excels at everything she does, this lofty goal comes as no surprise.