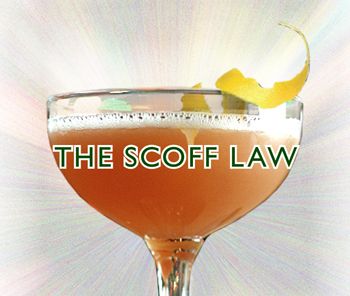 COCKTALE Prohibition beget some decidedly unsavory things in the United States: racketeering, a black market economy regulated with violence, the rise of organized crime, the death of a burgeoning wine industry.  Fortunately, it also spawned some delicious cocktails, such as the Scoff Law.

The Scoff Law was invented in response to a prominent Beantown Prohibitionist’s effort to embarrass those who engaged in illicit tippling.  Anti-Saloon League member Delcevare King developed a contest in fall 1923 to award a whopping $2OO to the inventor of a new word “which best expresses the idea of lawless drinker, menace, scoffer, bad citizen, or whatnot, with the biting power of ‘scab’ or ‘slacker’.”  Entries poured in from all over the country, even the world.  The following January the boston herald announced the winner: the “scofflaw”, coincidentally proposed by two separate Boston-area contestants, Henry Dale Irving of Andover and Kate L. Butler of Dorchester. Delcevare King’s noble efforts were widely mocked in both the media and beyond.  Several spoof contests even popped up, including one to devise a word stigmatizing “Drys” like King himself.  In the end, Prohibition-dodgers embraced their new moniker with relish, even across the Big Pond: Just ten days after the contest winning “scofflaw” was unveiled, the “Scoff Law Cocktail” was invented at Harry’s Bar in Paris.  It remained popular through Prohibition’s demise in 1933.

Shake with ice in a cocktail shaker.
Strain into vintage cocktail glass.
Garnish with a lemon twist.