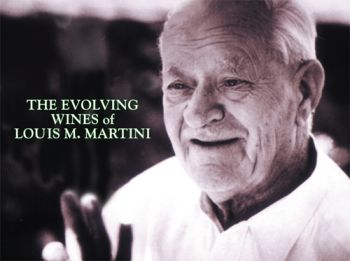 Once,
if one were asked to name a fine Californian winery, Louis
M. Martini would be on most lips. Venerable and respected,
it stood at the peak, along with Beaulieu, Inglenook and
Charles Krug. But then, for reasons both clear and obscure,
it fell below the radar. “Martini” would more likely evoke a
cocktail of gin or vodka with an overflight of vermouth.
Martinis in the California wine trade with the given names
of Elmo, Narcisco, Rafael, and Walter are not related to
Louis. Neither is the winery called Martini &
Prati.

Those who know
about and care about wine have continued to nurture LMM in a
corner of their consciousness, and have been pleased to
witness its reemergence in recent years. So it was with
great pleasure that I sat down with Michael Martini, the
third-generation winemaker, to talk and taste when he
visited during the Spinazzola-Boston Wine Expo weekend in
early February. I’d like to share that pleasant session with
you, first setting the scene by reviewing the winery’s
history then looking at its current status and prospects and
wine releases.

As is evident
from the Chronology (below), the Martinis have been ahead of
the curve from the start, always experimenting. Louis M. and
Andre Tchelistcheff planted pinot noir and chardonnay in
Carneros as early as the late ‘3Os. Martini produced the
first varietally labeled Merlot in 1968, when it was
virtually unknown in America. LMM wines have always tasted
of the grape, not oak. Wasn’t it Louis P. who said something
like, “If I want to taste wood, I’ll chew on a
two-by-four.”? Large oak ovals and redwood were favored. The
wines were balanced, supple, subtle, products of slow
fermentation and slow aging, never overripe or high in
alcohol, never showy. Neither were the prices overripe, but
some complained that the wines were inconsistent.

Tastes change,
experience teaches, equipment ages, finances compel. The
Gallo purchase brought fresh perspective and new resources,
both grapes and funds, yet father-to-son succession of
winemakers over three generations secures the priceless
anchor of institutional memory. Michael Martini has
continued in the dynamic and innovative tradition of his
father and grandfather. He has presided over the Napa Valley
Vintners Association, the American Society of Enology and
Viticulture, and, at UC Davis, the Trellis
Alliance.

There has been
some redefinition of vineyard sources: now about 25O acres
in Napa and 25O in Sonoma supply the grapes for the
167,OOO-case production. The large casks have mostly given
way to small barrels. The wide variety of varieties has been
refocused on Cabernet Sauvignon, plus the treasured
hundred-plus-year-old zinfandel vines at Monte Rosso. The
wines are riper now, but are still marked by restraint.
Chardonnay is to be resurrected. Louis M. and Louis P. would
be optimistic.

Cabernet
Sauvignon 2OO2
Monte Rosso Vineyard 15OO cases
As the name suggests, a steep mountain vineyard (8OO to12OO
feet) of red, iron-rich, decomposed volcanic soil set above
the fog. Sunny and cool, mostly southwest exposure, giving
the unusual and desirable combination of ample acidity and
ripeness. The soil and subsoil hold water well. This
low-yield vineyard has 23O acres planted. It is located in
the Mayacamas Mountains, just on the Sonoma side of the
county line. Cabernet vines were planted as early as 1938.
The wine, 5 percent Petit Verdot, spends 18 months in oak
barrels, 😯 percent French, 2O American. Elegant bouquet.
Deep, rich and long, full of bright, complex, sweet fruit.
The fine texture of the wine echoes that of the soil.
$85