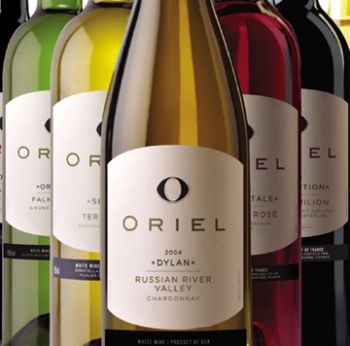 For
winemakers, sourcing grapes from outside a vineyard estate
is nothing new. Yellow Tail does it. So do Louis Jadot and
Verget. But creating a line of limited-production wines from
all over the world, crafted by a diverse group of renowned
wine-makers, bottled at the source and then distributed
under one label? Well, that’s certainly a new one but that’s
exactly what the concept of the very young but highly
acclaimed line of Oriel wines is all about.

Company founder
John Hunt launched the Oriel line two years ago. While John
always nurtured a personal interest in, and enthusiasm for,
fine wine, his entrepreneurial experience has been otherwise
focused until now. He studied economics at London University
and then worked for Procter and Gamble. After that, he
developed a chain of coffee shops, a software company, and
an e-business consultancy. Oriel is his first serious
venture into the wine industry. Likewise, Kelly Ford, the
company’s managing director, developed her business savvy in
the world of software, and, while enthusiastic about wine,
was most attracted to the Oriel business model. She
describes John as a “serial entrepreneur” and appreciates
the “crooked path” which led him to develop this idea.
John’s aim was to create high quality, small-production
wines, and make them affordable and approachable. This has
been possible by keeping all the wines – 27 to date – under
one label and overhead. The fact that neither John nor Kelly
had specific experience in wine sales and distribution
certainly hasn’t hindered their efforts. In fact, it may
just be that not having any preconceived notions, combined
with their unwavering belief in their concept, is precisely
how the vision came to fruition. Kelly stresses the
ground-breaking nature of the company when she notes that
Oriel is, all at once, a producer, an importer and, because
the wines are available for sale through their website, a
retailer.

THE
RESULTS ARE IN The
Oriel business model may be an original one but what about
the wines? Vincent Monaco, the corporate wine director for
Kappy’s Fine Wine and Spirits, learned about Oriel wines at
a meeting of the Wine and Spirits Guild of America. John
Hunt attended the meeting and introduced the product line.
Vincent was impressed by the concept of Oriel and eager to
see if the wines were as interesting as the idea. They were.
Vincent describes the Oriel line as “absolutely tremendous –
the proof is in the pudding.” After sampling the wine, he
immediately contacted John and brought Oriel wines into
Kappy’s. When asked his favorites in the portfolio, Vincent
said he was impressed by all of the wines, and he cited the
“Courant” (Cotes du Rhone), the “Sygnet” (Aussie Shiraz) and
the “Femme Fatale” (Rose Merlot) as his personal picks.
Errol Joseph, of Tosca restaurant in Hingham, is also a
supporter of Oriel wines. He comments, “To some, the concept
may at first seem gimmicky. But once you taste the wines,
you quickly realize the quality is there.” MSNBC Today
agrees, asking, “Would the quality of the wines themselves
match the marketing concept? The answer…is yes.” Indeed,
Oriel wines have received serious acclaim from national
publications in their first two years of circulation. Robert
Parker awarded 9O to 93 points to Oriel’s 2OO2 Bordeaux,
“L’Exception”. wine spectator gave “Etero”, a Barolo, 91
points. And playboy cheered “Jasper”, a Pinot Noir, with
three and a half bunnies!

HAND
CRAFTED As Oriel
line of wines continues to grow, the emphasis on small
production and expert winemaking remains constant. The
selected winemakers are given complete control, and they
craft wines that best exemplify the style and terroir of
their respective regions. These winemakers come with
impressive credentials. For example, Louis Barruol,
responsible for Oriel’s three Rhone selections, comes from a
long history of wine crafting: his family has been involved
with the Chateau de Saint Cosme vineyard since 1490. Gerry
Rowland, maker of Oriel’s Rutherford Cabernet, “Midnight
Rambler”, was born and raised in Australia, and it was there
where he started making wine. He then moved to California
for further study at UC Davis and has made wine for Stags
Leap and Chappelet. John Duval, creator of Oriel’s sole
Australian selection, “Sygnet” Shiraz, worked at Penfolds
for 29 years and was the Chief Winemaker for 17 of those
years. In total, the company has over two dozen world-class
winemakers it works with.

Kelly Ford
explains that the only way the company can grow is by adding
new wines and new regions because they will never
mass-produce the wines and risk compromising quality. While
none of the releases exceed 3OOO cases, most of the wines
are at around 5OO cases. New additions to the portfolio are
a Barbara d’Alba, called “Trifola”, and a 2OO5 Bordeaux,
“Iconic”. Oriel is also looking to release a New Zealand
Sauvignon Blanc as well as an Italian Prosecco in the coming
year.

ON
THE MARKET The
first year of production involved concentrated test
marketing. Oriel has not launched any national print or
television advertisements. Publicist Katherine Jarvis
explains that, “It’s PR, lots of in-store support and events
with retailers, keen focus on effectively merchandising the
range with restaurant features and centralized retail
displays, direct marketing/communication to trade and
consumers.” Currently Oriel wines are available in 13 states
and they only recently expanded to Massachusetts in 2OO6 –
carried by both restaurants and retail stores throughout the
state. Oriel works closely with Kappy’s. Vincent Monaco
explains that in Kappy’s retail outlets, the wines are
interspersed by region with all the others, but there is
also a large display as well. A potential buyer might be
drawn to the display in which there are laminated fact
sheets about each wine and bios on the individual
winemakers. Kappy’s also hosts tastings at all of their
retail venues to promote the wines. During the month of
October, Kappy’s ran a promotion called “Zin Fest”,
featuring quality domestic Red Zinfandels. Vincent remarks
that “Hugo”, an Oriel selection included in the promotion,
sold exceptionally well. It is also important to note that,
in addition to being a large retail chain, Kappy’s is a
distributor. Vincent remarks that Oriel has also been very
successful from a distributor perspective.

Keith Mills,
owner of Esprit du Vin in Milton, loves the wines
themselves, but has mixed feelings about the branding. His
wine shop is organized by region, and Oriel wines are
merchandised as such – never in a large display. He
describes all the wines as solid and well made, but wishes
there was more variety in the labels so as to better express
the uniqueness of each wine. As for restaurants, Tosca’s
initial interest in the Oriel line is a prime example of the
success of their hands-on marketing process. Errol describes
his introduction to Oriel saying, “The wines were presented
to me during the summer of 2OO5 by the local distributor,
Baystate Wine Company. Baystate was a brand new company at
the time, and Oriel was just entering the market. I had not
previously heard of Oriel, but I immediately found the
concept to be amazing. There are many collaborations in the
wine world involving wineries from different countries, but
I had yet to hear about wines from so many regions being
produced under one brand name. It was right then and there
that I told Rob Gillooly of Baystate Wine Company that we
needed to get the founder of Oriel, John Hunt, to Tosca as
soon as possible for a wine dinner.” The wine dinner was a
success, and afterward Tosca continued to feature Oriel
selections on their list. At present, Tosca serves the
“Portia” Italian white blend, the “Etereo” Barolo, and the
“Palio” Montepulciano d’Abruzzo. Although, so far, Oriel
wines are more readily found off-premise, Kelly actually is
seeing an increasing amount of restaurants, among which are
Sotheby’s Cafe in New York and 51O Ocean in Miami, switching
to Oriel-only lists. She notes that Oriel wine lists are
convenient particularly for restaurants without a full-time
wine director.

BREAKING
IT DOWN One can
spend hours learning to decipher wine labels from around the
world. Sure, it’s pretty simple in America: Cabernet is
Cabernet, and Riesling is Riesling. But what about old world
labels? Not everyone knows that Cahors is Malbec or even
that red Burgundy is Pinot Noir. It’s even trickier in
Italy! Pinot Grigio is a grape, but Barolo is a region
producing wines made of the Nebbiolo grape. Montepulciano is
a region out of which comes the celebrated Brunello (made of
Sangiovese) but go a few miles south and Montepulciano
d’Abruzzo is a grape unto itself. It’s all fine and well if
you take the time to study the unique
wine-making/classifications of each wine producing region in
the world, but what if you don’t have the time or the
interest and just want to drink a good bottle of wine?
Oriel’s labeling is clear and succinct – it identifies
exactly where the wine comes from, how it was made and who
the winemaker is. And incidentally, by eliminating much of
the guesswork, Oriel’s unique approach to production
encourages experimentation on the part of the consumer.
Errol Joseph at Tosca believes that, “To appreciate the
Oriel concept, you need to be willing to try different
varietals from different countries. For example, if you tend
to always drink California Chardonnay, you need to be
willing to sway from that and try the Oriel Pinot Grigio /
Chardonnay blend from Italy, the Albarino from Spain, or the
Riesling from Germany. This is the only way to appreciate
the diversity. The same can be said for red wines.” Keith,
from Esprit du Vin, agrees, “That is the good thing about
branding.” He also observes that one Oriel wine usually
leads to another. Kelly Ford explains that people might try
a California selection first and then branch out into less
familiar territory. In this way, Oriel wines initiate a
learning process. People come to trust the label and are
more likely to venture out of their comfort
zones.

Oriel wines may
be a young enterprise but the concept seems to be catching
on quickly. As they continue to expand their offerings – and
as more prominent winemakers begin to seek them out to
participate in this endeavor – it is clear that this is not
a flash-in-the-pan fad.