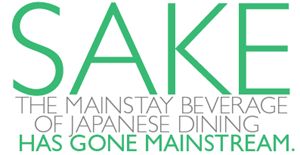 Although
sake has been in the US for decades, it was, until recently,
a fairly one-dimensional beverage consumed almost
exclusively with Japanese food. Typically served warm,
people either loved sake or hated it. But nowadays, sake is
chic. For a number of reasons, sake – particularly chilled
sake – has surged in popularity over the last couple of
years and its growth continues upwards. While Americans
still don’t consume nearly as much here as on a world wide
level, sake is increasingly becoming part of the vernacular
of both serious wine aficionados and people looking to
expand their cocktail horizons. In some instances, it is
even competing with vodka – being used by bartenders in a
myriad of cocktails from martinis to Bloody Marys. There are
also a number of flavored sakes, from hazelnut to pear and
many more, which have become part of the cocktail culture as
well. Additionally, from a health perspective, sake is
causing people to wake up and take notice. Most premium
sakes are free of sulfites, not to mention additives and
preservatives. It also has half the acidity of wine, amino
acids and, for what it’s worth, is less likely to cause
hangovers. Chilled or hot, sparkling or fruity, sake is
versatile, readily available and only becoming more
popular.

UP,
UP and AWAY Has
sake seen significant growth in Massachusetts lately? In a
word: absolutely. “There’s definitely been an influx in
sake,” says Rich Daly, the manager of Andover Liquors. Daly
attributes it in part to the increase in the number of Thai
and Japanese restaurants. Standing in the sake section of
his store, Daly pointed to the Gekkeikan 75Oml as his number
one seller, indicating that he sells about a case a week of
it. At $5.99 a bottle, this is one of the less expensive
brands and often his customers will graduate to brands such
as Momakawa, a domestic sake that comes in five flavors and
sells for $12.99. Lloyd Foster, Marketing Director of
Classic Wine Imports, also paints a positive picture,
saying, “Things are rosy. We’re growing over a good base and
we grew another 2O percent last year. I never would have
imagined we’d be where we are today.” Foster sees the growth
stemming from two places: the increase in the number of
Asian restaurants, and the increase in people buying sake at
the retail stores to have with their takeout food. Some of
the celebrity also can be traced to sake’s television
exposure. “The media, such as high profile chefs and cooking
shows using sake, brings notoriety that can wake the public
to the delight of sake,” says John Bottcher, Assistant to
the President at Ruby Wines, Inc. On the restaurant front,
Sarah Livesey, manager of Blue Ginger restaurant in
Wellesley – where they specialize in Asian fusion cuisine –
has also seen an increase in sales. She contends that
consumers are getting wise to the wonders of sake. “I think
as the general population becomes more sophisticated in
their tastes across the board and exposed to more things,
some of the mystique is being taken out of it. People are
more used to seeing sake, more used to drinking it and
tasting it, and then it just becomes more familiar,” she
says.

Once you get a
taste for sake, you can start spending some serious money on
it. Classic Wine Imports, for example, carries a
Daiginyo-style cold sake that comes in a 72Oml bottle and
retails for between $9O and $1OO. But who is the customer
buying this level of sake? “There’s a pretty good bet that
the person has been to Japan. The other potential customer
is someone who’s really interested in wine and figured out
that sake is more than one thing,” says Lloyd Foster,
adding, “That opens the door to get people to try more and
different sake. They want to show off; they want to take
their friends to a restaurant that has a good sake
list.”

COOLING
THINGS DOWN Although
Japanese and other Asian-style restaurants continue to sell
large quantities of warm and hot sakes, it’s the cold stuff
that is really winning consumers over. Essentially, sake is
treated as wine, despite its brewery origins, and often when
the temperature goes down the flavor goes up. Chilled
carafes or bottles along with small wine glasses are the
norm for serving it stateside, and restaurants’ sake menus
continue to grow along with customer interest. What dictates
whether sake is best served warm or cold depends on what
kind of sake it is. A good rule of thumb is that the higher
the quality, the more likely it is to be better enjoyed
cold. Here’s an example. If you’re dealing with a basic
Junmai (pure rice sake), then you’re much better off serving
it warm. But once you get into the higher quality Junmai
Ginjos and certainly the Junmai Daiginjos, then chilled is
the superior format. So while James Bond may have liked his
sake warm in the 1967 classic You Only Live Twice, these
days, it’s the cold stuff that is consistently winning wine
drinkers over. However, virtually all research done on the
topic revealed that it is the consumer who should best
decide, according to his or her own preference and taste,
what temperature works best.

THE
LEARNING CURVE Of
course, as more people seek out sake in restaurants and
stores, the more important it is to have knowledgeable staff
selling it. Until recently, the majority of sake-educated
people would have been those working in Japanese
restaurants. “It’s a little bit different because obviously
you’re dealing with rice instead of grapes and the whole
process is very different. There is some overlap but it is a
lesson in (and) of itself in teaching it,” says David Singer
from Libation Education, a professional consulting group
that offers wine classes and consulting services for
restaurants, corporate clients and private events. Singer
also comments on the importance of training restaurant, bar
and retail store staff: “Most importantly they should be
tasting. Education is huge and having it so your staff is
comfortable is more than step one,” he explains. “If they’re
not, they’re not going to recommend it; they will never
recommend something they are not familiar with.” Meanwhile,
a shift is afoot in terms of packaging and this should help
those intimated by some of the more traditional Japanese
labeling. “Sake producers are promoting to the new
generation of fine wine consumers by updating the product
package while adhering to the unique tradition they value so
much,” explains John Bottcher. Many labels aren’t in English
and can be difficult to pronounce, which can sometimes be a
barrier. “Producers are making labels with much more color
and easier to focus on and read. It is art. The Japanese
believe that making sake is an art form and the beautiful,
artistic bottles reflect the quality and art of making
sake,” says Bottcher. Another way to educate customers is by
way of a simple handout. Classic Wine Imports uses a
two-sided sheet. The first side gives an overview of the
different kinds of sake and the second side goes into the
brewing process. Lloyd Foster says these have been
invaluable for teaching restaurant and bar staff as well as
retailers and their customers.

David Singer
notes that most people experience their initial rites of
passage into the realm of sake via the hot stuff served in
Japanese restaurants. “They are introduced by the hot sake
which is probably some of the worst sake you’ll find. It is
absolutely the tip of the iceberg, and like serving white
wine too cold; serving sake too hot will hide the faults
that are in it,” he says. While Singer thinks that in some
cases, it’s not always the highly discerning customer
ordering some of the standard issue hot sakes, he does
concede that this is not necessarily a bad thing. “They’re
enjoying it and that’s the important thing. In time they
might learn to explore some of the other sakes,” says
Singer.

TINY
BUBBLES How about a
little carbonation to jazz things up? Kaze, a recent
addition to Boston’s Chinatown shabu shabu restaurant scene,
has sparkling sake on their menu and it’s proven to be quite
popular. It is called Puchi Puchi (puchi translates to
“small” in Japanese) and Kaze’s floor manager Sue Hu says
that it “tastes like soda and doesn’t have a lot of alcohol
in it”. Hu also added that women tend to opt for it more
frequently. In addition to the Puchi Puchi, Kaze carries 12
other sakes, with Chobei being their number one seller. It
comes in 11 ounce bottles and Hu says that some like it hot,
while others prefer it chilled. Kaze also does well with
Hakushika’s extra dry Chokara sake which pairs well with
meat dishes. Hu notes that most customers tend to order the
most popular one and she hopes that as people get more
education on sake that they’ll expand their horizons onto
some of Kaze’s other sake offerings. “Not a lot of people
know about sake,” says Hu. As for other sparkling sakes, the
Gekkeikan brewery, which is one of Japan’s largest, also
produces a naturally carbonated sake called Zipang. Could
sparkling sake be the next hip thing? We’ll have to wait and
see what bubbles up.

SOMETHING
WASABE THIS WAY COMES
Grand Island Beverages, out of California, recently launched
a 75/25 blend of Dutch vodka and Japanese sake they have
named WasabE. It has made its way to the Washington, DC area
and should be available in the northeast fairly soon.
According to Grand Island Beverages founder Richard Cutler,
Wasabe’s goal is to be an east-meets-west fusion spirit
brand that was inspired in part by the growing interest
mainstream America has with all things Japanese. WasabE uses
sake brewed in Japan that is then sent to the Netherlands
where it is blended with premium Dutch vodka with no
additional flavorings added. For more information visit
www.wasabeworld.com

The
SKY’S the LIMIT The
price ranges and varieties of sake are copious and one could
spend a lifetime trying them all. “You could probably fill a
whole aisle with sake, there’s that much out there. A lot
more wholesalers are having a larger selection to choose
from,” says Rich Daly. His sentiment underscores the fact
that indeed, there are countless kinds of sake out there
already being enjoyed and just waiting to be discovered. In
Japan, there are about 17OO sake breweries, better known as
kuras. These kuras produce nearly 1O,OOO types of sake.
There are also seven producers here in the US. The key
ingredient to success with sake is education through reading
up on it and certainly through tasting. Also, a little
bartender experimentation could easily result in the next
hip sake cocktail to hit the scene. Educate yourself, your
staff and your customers and see what happens. From the
novice to the connoisseur, there’s a sake for every person
in every price range.