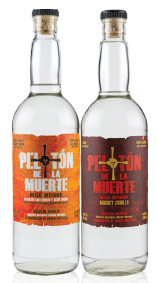 There are two new artisanal expressions in the portfolio: Vegan Pechuga and Criollo. Both mezcals are produced with wild agave grown in the Mexican state of Guerrero and traditional methods by master mezcaleros who carry on generations of classic mezcal production. The Pechuga is a vegan mezcal produced from a field blend of wild agaves that are roasted and distilled together, with botanicals hung from the Arabic still during the second distillation, resulting in a mezcal with notes of cooked agave, mandarin, oranges, anise and mint. The Criollo is open-air fermented for 5 days before being double distilled, first in an Arabic still and then the 2nd pass in a Filipino still with a wood hat, producing an intense mezcal with notes of light smoke. Suggested retail for both is $39.99. AVAILABLE FROM MS Walker.