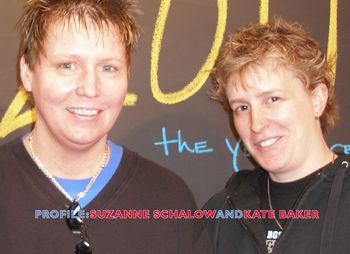 The Bay State’s craft brew craze is going – bacterial – and these gals are in the thick of it.  The sisters in suds met as co-workers at the Lizard Lounge a decade ago, and struck up a coalition.  They’d worked in brewpubs, made homebrews.  They built up the brew-and-food consciousness in Cambridge, and now in the near ‘burbs they’ve opened the doors of Craft Beer Cellar last fall, and they’re making waves.  Finding and recommending beers (and dishes to match them) is their stock in trade, the bailiwick of savvy beer folks and members of the growing craft beer community.  When I said I was making chicken curry at home, they recommended Pretty Things Jack D’Or – good choice!  Cooking with beer (and drinking it) signals the rising ‘gastropub’ movement in dining and entertaining.  While we talked at 1Oam on a January weekday, customers came and went, and brew biz heavies passed through: Greg Berman (Mr. Clown Shoes) and Brendan McLean, East Coast rep for Oskar Blues, craft beers in cans (Lyons, Colorado).

HOW WE GOT STARTED  SUZANNE What I learned from studying anthropology and humanities at Harvard is that conflicts are not resolved, they’re transformed into something else.  You’ll go build a higher fence, go talk to your dog . . .  That’s one of the best skills I could bring to the table as a manager in the restaurant business, where a constant flow of people connect often in different – if not always amicable – ways.  KATE I got a job right out of high school washing dishes and prepping the salad bar.  The honest story is that one of my co-workers hurt his knee and my boss looked at me and said: “Get over here.”  I was on the line – and never went back.  Right through college, I cooked in Cocoa Beach, Florida, came back here, catered, worked at Boston Beer Works for 7 years as kitchen manager.  I got my restaurant management degree at Newbury College.  When a customer asks, “What can I make to go with my Belgian Abbey Brown Ale?”  I’ll mention Flemish Beef Stew.  SUZANNE At Lizard Lounge, I put Kate in as beer manager, but we were really looking for someone to head the entire beverage program, focused on beer as #1.  Beer then made about 22 to 23% of our sales; by the time we left it was up to 33%.  At Kate’s request, in 2OO7, we expanded from 24 to 3O taps – all craft.  Five IPAs, a daily IPA, lots of New England brews, also Sierra Nevada, Ommegang, Mojo . . . we were humming right along.  Some gastropubs go back over 2O years now – John Harvard Brew Pub, Redbones, Sunset Grill & Tap – serving a wide range of ales and beers in tap and bottles.  They weren’t necessarily getting a lot of love from a general public content with guzzling macro-swill and fizzy yeller stuff, but they kept at it.

CUTTING LOOSE  When we decided to make our bittersweet split from Cambridge Commons/Lizard Lounge, we knew we needed a break from the restaurant business altogether.  When you’re in a beloved organization for over a decade, it becomes part of your identity – in some ways it still is.  We still go in there, and people there have found us here.  We knew we wanted to work in craft beer, we just had to decide how.  We sat in the sun, had a beer, talked it over with friends.  We ran over 12O beer dinners during our time at Lizard Lounge.  We kicked around a bunch of ideas, and the thing that stuck to the wall was – a craft beer store.  It really was a happy accident.  We had to figure it out, write a business plan, and then it began to become a happy reality.

AMAZING GRACE  Everyone in this business is unbelievably supportive.  No, not investors!  – we sunk our own money into this.  Fans, plenty.  A guy walked over from Il Casale [across Leonard Street] the other night and said, “I love craft beer because you’re all so devoted to it and each other, like you’re all in this together.”  We laughed and said, “Yeah, we sing Kumbaya, and join arms.”  Mentors?  Absolutely.  I could name you 5O right now.  Example: Hugh Sisson at Clipper City Brewing Company down in Baltimore talked us through setting up our cask system eight years ago.  You don’t ever get this competitive thing in the craft beer world.  Will Myers, Megan Parisi, and Phil Bannantyne over at Cambridge Brewing Company, or Patrick and Rachel Rue of The Bruery in California – any day of the week they will call to support you, offer their product.  Kate and I do command respect as long-time community members; they know we’re not just blowin’ smoke.  In Denver, at the Great American Beer Festival, Adam Avery (brewmaster of Avery Brewing Co.) came up to us with love and support and said, “Anything I can do for you?”  These guys are great; this industry is awesome.

GOOD NEIGH-BAHS  Location was key in our move.  We wanted to be near or west of Cambridge.  We wanted to do a great job, stock great beers and pay our bills.  It took a lot of passion and sweat to do what we’ve done.  I’m humbled by the reception we’ve had.  I wasn’t sure of our local fan base, but we’re developing regulars, repeat customers, quickly.  Il Casale’s people have been here, have been supportive from the first.  They taste a few beers, chat about what goes with Italian foods, and have a few of these beers on their list (Duvel Green, Pretty Things).  So do Vintages and Stone Hearth Pizza.

FLOOR PLANS  Carrying wine never was an afterthought: we knew from day one we wanted to sell a lot of beer and a little [1OO SKU] good wine.  If this were a full liquor license, we’d even sell a little artisanal, small-batch spirits.  (Not to say the big boys aren’t good, but we focus on handcraft.)  We break from our handcraft philosophy on the wine because we need to have products whose names people know and are affordable.  We’re reducing the wine a little, moving it to a side wall, while Belgians are expanding, and we’re beefing up the glassware.  Kegs can be ordered and stashed in our cellar.  We might put in a cooler.  We keep our eyes and ears open.  People have approached us about putting in a classroom, a small facility where we might host seminars, organize private tastings or beer events.  We’ve held events focused on a particular brewery (Peak Brewing, Portland, Maine) or style (Belgian holiday beers).

CELLAR NOTES  We have the entire shop footprint [15OO square feet] duplicated in the basement – so far just for cellaring beers.  We’ve already laid down cases with some heat (over 8%) like Mikeeler and T’jesus.  Cellaring beer is new enough that we’re finding inexplicable characteristics, both good and bad.  Hops may flatten out, but something really boozy – aged in a whiskey barrel – might soften and gain complexity.

WANT TO KNOW   People are starting to look at us as a place to learn about beer and to shop.  We hold tastings now Thursdays and Saturdays.  Crazy successful.  In the space of two hours, 4O to 5O people come in.  We want to be that ‘go-to’ place.  People are hunting for unusual beers, and our representatives and distributors are on the case.  They know how serious we are.  If Yuengling from Pottsville, PA, buys a facility in Memphis, we’ll try to find a way to bring their beer to this state.  Our biggest distributors, Craft Brewers Guild and Atlantic Importers, make up 8O% of our stock.  We pay attention when Allagash and New Belgium collaborate on Vrienden, when De Proef (Belgium) and Bell’s Brewery (Kalamazoo) join to make a cherry beer, Van-twee.  We keep some info on our just-expanded web at bostoncraftbeercellar.com.

RISING TIDE  It’s electric all over Boston.  One of our good customers is the beverage manager at Union in the South End, an upscale bistro with a fantastic beer list.  Eastern Standard is another; everyone behind the bar is educated, they have the proper glassware, and a range of beers from Belgian saisons to Imperial Stout.  Awesome.  Not just an accident that we worked into at BBW, but there became much more calling for it.  We did our first beer dinner in November 2OO2 and 15 people showed up.  When we left last year, we were doing beer dinners every two weeks, selling out 5O to 6O seats.  Demand is surely on the rise.

FIZZY FUTURE  We have to keep our finger on the pulse and be canny business people.  Building on our past, vis à vis the brewpub experience, we might open a gastropub at some point.  Who knows?  We all stay in touch with each other in our focus on craft beer.  We were sad that David Ciccolo had to shut his beer store recently, but Publick House is his breadwinner and he’s helping local food and brews at American Craft.  The good news is d stores all over the state, even those into wine and spirits, they are getting the message.  They have to stock good craft beers!

TIPS OF THE CAP   We have to say good things about members of our community, the Allstrom Brothers, Todd and Jason, Todd’s wife Candice, beer writer Andy Crouch, the many publications (mbb, ale street news, boston advocate, yankee brew news); Jim Koch at Boston Brewery and Sam Adams.  Our Bay State community is wide, all the way west to Berkshire Brewing Company.