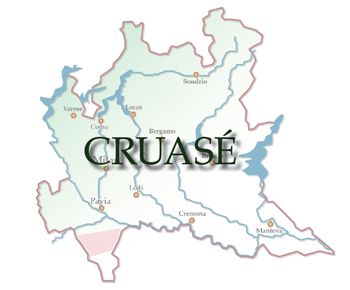 Earlier this year, at Vino 2O1O in New York City, I moderated a seminar that launched the American debut of Cruasé. Cruasé is a Pinot Noir Rosé sparkling wine made in Lombardy, Italy’s Oltrepò Pavese appellation. Though the Cruasé category could eventually be integrated into Oltrepò’s DOCG for Metodo Classico – as Saten has been integrated into the Franciacorta DOCG – it is currently a registered brand of the consortium of Oltrepò producers (Consorzio Tutela Vini Oltrepò Pavese). According to the director of the consortium, Carlo Alberto Panont, Consorzio members who want to use the name Cruasé and the associated registered trademarks must satisfy the Consorzio’s production requirements for Pinot Noir Rosé Oltrepò Pavese Metodo Classico DOCG and comply with two key requirements. First, Cruasé must be 1OO% Pinot Noir, rather than the minimum of 85% as specified for the DOCG typology for Pinot Noir Rosé Metodo Classico. Second, the base wine must be a rosé wine attained by maceration of grapes in a press or a tank. Cruasé cannot be made by blending red and white musts or red and white wines. Cruasé then presents the wine world with a second-fermentation-in-the-bottle category never before delineated: all Pinot Noir, all rosé base wine. Until now, nearly all sparkling wine producers worldwide have followed Champagne’s example by making rosé sparkling wine from a blend of white and red grape musts and/or still white and red wines. Individual examples of 1OO% Pinot Noir sparkling wines made in this manner are exceedingly rare. I have been tasting wines for over 3O years and these examples of Cruasé were the first I have ever tasted.

Oltrepò Pavese means “on the other side of the Po River from Pavia”. Pavia is a city in southern Lombardy. The vineyards of the Oltrepò zone lie among foothills between the Po and the Apennines which ascend further to the south. More than half the vineyards of Lombardy are in the Oltrepò Pavese DOC. Though there are many small landholders, Oltrepò has been where wealthy Milanese families have built country estates. Grapegrowing for wine production is a common agricultural pursuit.

Though the climate, expositions and soils are very similar to that of Barolo, Oltrepò has not enjoyed a reputation for quality wine. Sparkling wine houses from Piedmont have purchased Oltrepò base wines and anonymously blended them into their own branded products. Oltrepò has also long been the source of inexpensive table wine for Milan. Throughout the 2Oth century, several large cooperatives accounted for most of Oltrepò production. The Oltrepò Pavese Denomination is behind only Chianti and Asti in volume of production. Though a small group of boutique wine producers have issued fashionable, high quality wine, quantity not quality has been the message that consumers have heard. So is confusion. The Oltrepò Pavese denomination includes 44 DOC wine typologies and 3 DOCG typologies.

The climate, however, allows producers to pick Pinot Noir at early stages of skin ripeness when the balance of acidity and sugar in grapes is suitable for sparkling wine. Skin ripeness is not a necessity for quality sparkling wine. The clones in use are more suitable for sparkling wine than for still wines. Oltrepò Pavese was one of the areas that, in the late 18OOs, pioneered the production of “Champagne-method” sparkling wines. Making a rosé sparkling wine from rosé wine is challenging in a winery, particularly at harvest time, as it requires the availability of dedicated presses and tanks. In addition, getting the desired color year after year is exceedingly difficult because the second fermentation and time on the lees alters the original color of the base wine blend. Adding red wine to adjust color, as is commonly done in Champagne and other countries, provides a much more stable wine color. Given the experience and skill of Oltrepò producers and the availability of plenty of Pinot Noir grapes, Oltrepò Pavese is in the ideal position to make a sparkling wine the likes of Cruasé.

Whether the market accepts Cruasé with open arms is another story. The track record worldwide for start-up producer-shared trademarks has been patchy. Take consumer resistance to “Meritage” for example. Cruasé is not the first time the sparkling wine producers of Oltrepò Pavese have tried to distinguish themselves. In 198O, several well-intentioned producers created an association which allowed use of the term “Classese” on the labels of their bottle-fermented wines. Just as with Cruasé, use of the name “Classese” entailed adherence to production guidelines. The name, however, was too similar to that designated for Italian bottle-fermented wines, Metodo Classico. The trademark, Classese, has disappeared from usage.

There has been some debate within Italy about the appropriateness of the name Cruasé. There are two rationales for the name. First “cruà” is local dialect for the French word “cru”. The union of cruà and the French word “rosé” makes Cruasé. Another rationale is that the word prefix comes from the Italian word, crudo, which means raw or unprocessed. The combination of crudo and rosé describes a “naturally rosé wine”. “Naturally Rosé” is a marketing slogan for Cruasé because it differs from sparkling wines which are blends of white and red musts and/or wines. Critics of the name feel that it is too derivative of French words. According to them, the name must be more distinctly Italian.

While Cruasé is establishing itself, in order to enable rapid market differentiation, producers should conform to a defined style of Cruasé wines. On the nose and on the palate, a critical factor determining style is duration of lees contact. In other words, should the wines emphasize fermentation character (acetates which show banana, pear and fingernail polish character), Pinot Noir fruit (strawberry and cherry), or lees autolysis character (burnt buttered toast, dried fig, cocoa, etc . . .)? Currently the relevant style criteria, Oltrepò Pavese DOCG metodo classico calls for a minimum of 18 months on the lees for non-vintage and 24 months on the lees for vintage Cruase. At 15 months, yeasts can still deliver fermentation character. At 24 months and beyond, lees autolysis character takes over. My point of view is that producers should aim for balancing Pinot Noir varietal fruit and autolytic lees character. Eighteen months on the lees should be ideal. Getting the right balance of fruit and lees is no easy task. Another factor that limits style variability is the dosage level. Cruasé is limited to the Brut Nature (O to 3 grams per liter of sugar) and Brut (O to 15 grams per liter of sugar) categories. In my view, at over 12 grams per liter, sweetness becomes too evident.

Cruasé fills a marketing void. Before the world stock markets shivered in September 2OO8, rosé sparkling wine was the rage, with Rosé Champagne wildly popular at almost any price in countries such as Japan. Though Champagne sales have declined considerably since that period, interest in rosé still wine remains high. Given the concomitant interest in Pinot Noir, I believe that, provided the price is right and there is product and distribution support within the US, Cruasé will find purchasers among consumers. Prosecco has become successful in the under $2O per bottle segment of sparkling wines.
Champagne starts at $4O per bottle. Between $2O and $4O per bottle, there is a market void. American sparkling wines could fill this category. Americans, however, have not been loyal to the US sparkling industry. Moreover, to my knowledge, there are no 1OO% Pinot Noir Rosé bottle-fermented American sparkling wines. Though large wine producers from Oltrepò Pavese have economies of scale that could produce Cruasé in the $2O to $4O retail per bottle, I am not sure that boutique producers on the scale of grower Champagnes could do the same. A weaker Euro value vis a vis the US dollar should help bring the US retail cost down.

Rosé wines should be delicious to look at. Rosé sparkling wines made from rosé wine have a salmon to amber color that defines their production method. From a visual perspective, packaging such as the Tenuta Mazzolino, which uses this color on labeling and features a transparent glass bottle, helps identify the product quickly in an appealing way. Though rosé pigmentation “naturally” achieved is sensitive to being bleached by ultraviolet light, my preference would be to use clear glass bottles to ensure instant product recognition and visual attractiveness. Perhaps, bottles could be wrapped individually in tissue paper for transport and storage.

Cruasé
The first time I tasted Cruasé was under the spotlight at the Vino 2O1O seminar.
I was able to bring back five samples of Cruasé to Boston to assess for this article.  (To my knowledge, there are no Cruasé wines in our market yet.)  I have listed the wines according to my preference, the first being the most preferred.