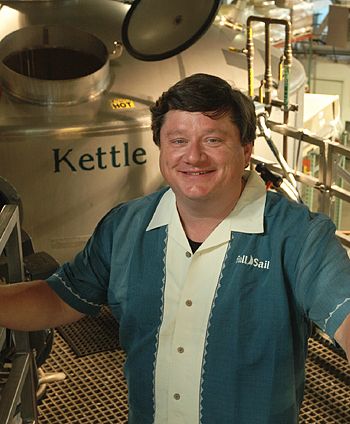 Based in the heart of the beautiful Columbia River Gorge, the Full Sail Brewing Company of Hood River, Oregon, is one of Americaâ€™s oldest craft breweries.  The brewery is an interesting melange of personalities and attitudes, ranging from assertive American-style ale lovers to hard core Germanophiles.  Backed by its powerful flagship, the Full Sail Amber Ale, and its slogan, â€œstoked to brew, brewed to stokeâ€, the brewery produced more than 12O,OOO barrels in 2OO7.  Full Sail proudly touts its status as an employee-owned business and is known for the introduction in 2OO5 of its excellent Session Premium Lager, a pre-Prohibition style beer bottled in the classic stubby container.  The brewery also produces a line of limited edition lager beers, called LTD.

In a break from the ordinary craft beer experience, Full Sail struck an agreement with the Miller Brewing Company in 2OO3 to contract brew the iconic Henry Weinhardâ€™s brand for the Milwaukee-based company following the closure of the Tumwater, Washington, brewery in 2OO3.
I recently visited Full Sail, where I met with Executive Brewmaster Jamie Emmerson, who showed me around the place before sitting down to a tasting panel of the breweryâ€™s beers.

ANDY CROUCH How did your Session lager product get developed?
JAMIE EMMERSON Session came about because of the stubby bottle.  The last brewery to use it was Tumwater and they closed â€“ we spent three years talking about what to do.  One of my neighbors down the street used to be a lineman for the University of Oregon and when I invited him over and offered him a beer he would say â€˜no thanksâ€™.  I figure he didnâ€™t drink.  Later on I thought that this style would be a good one for that guy that could go against a continental pilsner.  Itâ€™s done in that style, all malt, so no corn or rice.  Itâ€™s a bit hoppy and as my dad says, â€œitâ€™s just beer.â€ Low sulfur.  Itâ€™s lagered start to finish in three weeks.  Itâ€™s a warm ferment and you get a little bit of fruit.  You rack it down very cold and it ages about two weeks and four days.