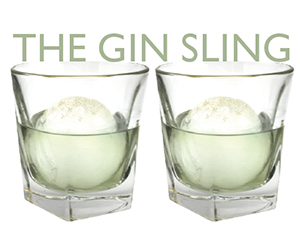 WITH WARM MONTHS upon us and even hotter weeks ahead, our bibulous tastes inevitably switch around this time of year from dark to light. The Gin Sling is a simple and historic place to start.

A direct precursor to the cocktail and was once considered as American a tipple as they come, The Gin Sling isn’t much more than booze, a little sugar, a little water, a lump of ice and a scrape of nutmeg. As such it is hardly distinguishable from the Toddy, the Julep or the Sangaree, which were contemporaries. The gin variety, writes David Wondrich in Imbibe, “became one of the iconic American drinks, consumed morning, noon, and night and everywhere American was spoken.”

The name “Sling” seems to have derived from how it was consumed – by “slinging one back” – as we Americans had a reputation for doing. According to Wondrich, from the late 18th century and well into the middle of the 19th century “whenever someone made even passing mention of the alcoholic concoctions characteristic of the American people, ‘Sling’ was one of the first words out of the inkwell.” That the drink was consumed in the morning upon waking was also commonly mentioned. In the early 18OOs seeing a man take two Slings before breakfast was quite common. Times have indeed changed. To recreate the experience, mix up one of these. To get really authentic about it, you could mix up a couple and take them in rapid succession upon rising . . . though you may want to save your historical reenactment for a weekend or holiday.

Stir with a spoon in an old fashioned glass.
Garnish with freshly grated nutmeg.