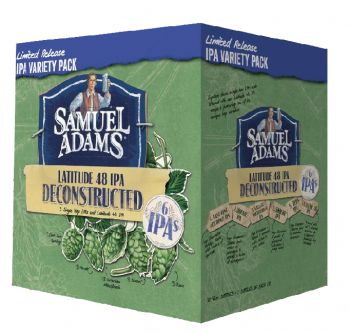 SAMUEL ADAMS LATITUDE 48 IPA DECONSTRUCTED – This line of IPAs has been re-released for a limited time.  Brewed with a blend of five different hops from regions falling along the 48th latitude line (the “Hop Belt”), the beers have been taken apart, hop by hop.  Aside from the Latitude 48, each beer is brewed with only one of the five hop varieties.  The 12-pack includes two bottles of Latitude 48 IPA, as well as two bottles of each single-hop IPA: East Kent Goldings, Hallertau Mittelfrueh, Simcoe, Zeus IPA and, new this year, the Mosaic IPA.  Suggested retail is $15.99 to $18.99.  Available from Atlas Distributing, Burke Distributing, Commercial Distributing, L. Knife & Son and Merrimack Valley Distributing.