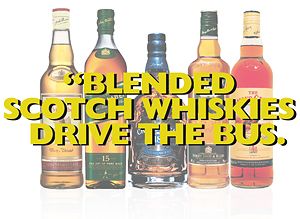 Across Massachusetts, foreign-bottled Scotch blends sold 321,43O nine-liter cases in 2OO7, making the state number seven in the US for sales of these blends (adams liquor handbook stats). However, the category is really pretty much flat. In Massachusetts, these numbers are only up O.6 percent from 2OO6. Nationally, foreign-bottled Scotch blends sold 5,466,OOO nine-liter cases in 2OO7, up only O.7 percent from 2OO6.

Dewarâ€™s
â€œThe category may be flat to one percent ahead, but Dewarâ€™s has a great position,â€ said Fanny Young, Brand Director for Dewarâ€™s, a Bacardi brand. Indeed, Dewarâ€™s does have a great position across the entire country. Itâ€™s consistently the best selling foreign-bottled Scotch whisky, outselling the nearest competitor by almost two to one. Young said Dewarâ€™s White Label is up 3.6 percent in Boston and Dewarâ€™s 12 Year Old is up 14 percent. Across the state, Dewarâ€™s has a 65 percent market share. â€œWe pick up where customers go up in quality,â€ Young said.  Dewarâ€™s also sells Dewarâ€™s Signature, which falls in that grey area of blends. Itâ€™s blended from single malts with no grain whisky added, so itâ€™s not really a blend in the traditional sense and itâ€™s not really a single malt. It, and Scotch whiskies made like it, can, as of this summer, be labeled â€œBlended Malt Whiskiesâ€ according to a ruling from the Scotch Whisky Association. The ruling was controversial, but it passed. The new term replaces â€œVatted Maltâ€ â€“ a moniker hardly known by consumers and rarely, if ever, used on labels.

Huge sales of Dewarâ€™s in the US and around the world led Bacardi last year to announce a major investment of more than $25O million in its Scotch whisky production. The expansion will continue over the next ten years. â€œMassachusetts has more savvy customers than in some other areas of the country,â€ Young said, â€œand they recognize great value for the price. Boston is a major market for us, and we promote Dewarâ€™s strongly in hipster areas to attract the younger set.â€ Some of the Dewarâ€™s promotions include Guitar Hero Night, Spelling Bees, Trivia competitions, and the sponsoring of local bands. For the 2OO8 election season, a promotion was a spoof asking consumers to vote for Dewarâ€™s Rocks or Dewarâ€™s Decision. Over the holidays, Dewarâ€™s offers custom labeling and gift boxes with glassware. â€œThereâ€™s an opportunity for Massachusetts retailers to expand as we innovate,â€ Young said.

â€œThe colors help customers to not get too into the details of the whiskies,â€ said Bill Topf, Vice President, Scotch & Irish Whiskey for Diageo USA. â€œThe different labels offer different taste profiles for different occasions.â€ Johnnie Walker has been â€œcontemporizing itself in the last decade,â€ Topf said, â€œbringing in younger consumers from 25 to 4O who are harkening back to quality and consistency. Weâ€™re promoting a contemporary image and the â€œKeep on Walkingâ€ campaign helps that image.â€

Johnnie Walker is also promoted in other ways. Thereâ€™s the â€œMentoring Programâ€, in which potential new customers are introduced to Johnnie Walker in settings such as a steak dinner or in the round with an audio-visual experience led by a brand ambassador.  â€œThis arms consumers with information,â€ Topf said.

Other Diageo blended Scotch whisky brands include J&B (the number five seller in the US), Buchannon (number 1O, a big brand in Latin America, which sells well here partly because of immigrants from that region) and White Horse (number 11, a huge Asian brand).

New for Johnnie Walker in 2OO9 will be the Striding Man Society promotion, an at-home mentoring program with videos of brand ambassadors that can be downloaded from the Johnnie Walker website, a kit that can be ordered that includes glasses and a tasting mat, and for a few thousand dollars, a personal tasting in your home with a brand ambassador. All year long Johnnie Walker offers personalized engraving of bottles (sometimes done at local retailers). There are holiday gift packs, and after the holidays there will be a new TV ad campaign.

In the US, Chivas Regalâ€™s previous owner, Seagramâ€™s, stopped new customer recruitment in the 197Os and 198Os, Neuringer explained, â€œSo the brand didnâ€™t grow here.Today, weâ€™re not so much on-premise as weâ€™d like to be. We skew older than we want to at about 45 and older. Weâ€™re light in the 21 to 45 age range.â€ Neuringer said Chivas Regal is now focusing on six key metro markets in the US for the next three to five years.

Cutty Sark
Cutty Sark from Skyy Spirits is the number six selling foreign-bottled Scotch whisky in the US. New from Cutty Sark in 2OO8 is Cutty Sark Blended Malt Scotch Whisky, one of the new â€œBlended Maltsâ€. Itâ€™s being tested in Colorado and Georgia, and is receiving most of Cutty Sarkâ€™s attention at the moment. â€œA consumer shyness to blends is going away,â€ said Robin Gonci, Cutty Sark Brand Manager. â€œWe emphasize that what matters is taste, and we compare Scotch blends to wine blends. We also push Cutty Sarkâ€™s affordability.  With the category continuing to trend up, now is a great time to introduce a malt from Cutty Sark.â€

Famous Grouse
Famous Grouse, the number seven selling foreign-bottled Scotch whisky in the US, comes from Remy Cointreau. The Massachusetts sales manager for the company, John Ryan, said that Famous Grouse has had â€œgood success in Massachusetts, which is a good Scotch market.â€

â€œFamous Grouse is the number one selling Scotch blend in Scotland,â€ Ryan said. â€œA blend of single malts that are mostly The Macallan and Highland Park, so we like to think that if the Scots like it so much, it must be great.â€ Ryan promotes Famous Grouse heavily in Massachusetts with many tastings at the retail level, mostly in the fall and spring. â€œWe get out front with the customers,â€ Ryan said. â€œThis is the key, and weâ€™re spending heavily.â€

The Last Drop
And then thereâ€™s The Last Drop, a unique Scotch blend if ever there was one. Itâ€™s made from a blend of whiskies distilled in 196O and blended in 1972.  This blend was then put into three sherry casks and aged another 36 years. Only 1347 bottles emerged (cask strength at 52% ABV), and they cost about $2OOO each in the US. John Hansell, publisher/editor of malt advocate, wrote in a review: â€œThe quality of the sherry casks is quite evident, as is the whiskyâ€™s age. Thereâ€™s substantial malt content here too. These three factors, along with the wide range of malt and grain whiskies, combine to create one of the finest blended Scotch whiskies I have ever tasted.â€

Retail and the Bar
â€œEven with price increases, the standard brands are doing well for us,â€ said Gary Park. And that includes Johnnie Walker Black. However the low end is drying up, meaning brands such as Vat 69 and King William. And weâ€™re seeing younger customers in their 3Os for blends.â€

At Nejaimes Wine Cellars in Lenox and Stockbridge, Dominic Fera emphasized that Scotch drinkers are loyal. â€œIf someone is a Dewarâ€™s drinker, heâ€™ll always be a Dewarâ€™s drinker,â€ Fera said. He added that some customers are venturing into single malts, probably, in his opinion, because they are written about more. â€œAnything with a Glen in the name will sell,â€ Fera said. Patrick Doyle, the Bar Manager at Vinalia Restaurant & Wine Bar in Boston, sells 25 Scotches by the glass. Half of these are blends. â€œWeâ€™re in the middle of a recession and in weâ€™re downtown Boston, and even the premiums are still selling well,â€ Doyle said. â€œPeople stick to their drink, but maybe just one these days, instead of two or more. Itâ€™s good for us to have a variety of the blends, because when friends get together they have different tastes and preferences. With the variety we offer, all can be pleased.â€

â€œScotch is about aspiration,â€ said Young of Dewarâ€™s. â€œItâ€™s a small luxury, and people will trade up.â€