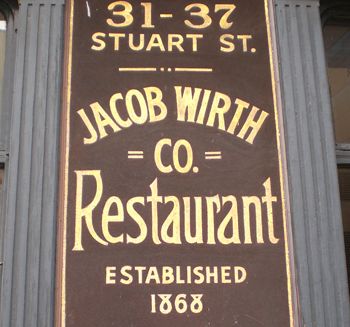 Rich mahogany stretch of bar,
Scatter of sawdust on the floor,
Waiter, who asks you how you are-
Happier man than you were before.
You entered the old familiar door.
Enisled at last! Disaster, strife?
The world is still as it was of yore:
A seidel of dark on the side of life.

This passage, from the poem â€œThe Ballad of Jake Wirthâ€ penned by David McCord, paints a particularly accurate portrait of the rich tapestry that is this barâ€™s history. With its distinct dark wood, legendary beer list and reputation for being home to quintessential good times, Jacob Wirth Restaurant is a landmark establishment that continues to thrive at its Stuart Street home in Bostonâ€™s Theater District. Established in 1868, it is on a very short list of the oldest bars in the city. I paid JW a visit on a recent Saturday afternoon and got the inside scoop from General Manager Johnny Blass, and an earful from a local attorney whoâ€™s been a regular since the 196Os. Before we delve into those conversations, first a little history, taken in part from the book a seidel for jake wirth which Blass sent me home with.

Originally from Prussia, Jacob Wirth arrived in America in the mid-186Os and in 1868 he opened the restaurant. A decade later they moved across the street and that is where the establishment still stands. A standout feature then, and now, is the Prussian carved long mahogany bar which is really something to see. One can only imagine the stories and secrets that are imbedded it its grain. When Wirth passed away in 1892, son Jacob took the reigns and led the establishment through many popular and profitable years, some of which even fell during times of Prohibition. Fast forward to 1975, the restaurant was taken over by the Fitzgerald family who paid every respect to its history. They even went so far as to renovate the exterior of the building so it would look the same as it did when Jacob Wirth poured his first draught.

The menu also is a history place holder. Although youâ€™ll find plenty of American fare, there are a number of traditional German culinary delights to choose from. I chose the potato pancakes which were served with applesauce, sour cream and sliced apple. They went superbly with the pint of Paulaner Hefeweizen that Johnny Blass recommended I try. Speaking of beer . . . You can choose from 38 (give or take, depending on the season) different beers on tap, including 11 German imports. They offer everything from Doppelbocks and Hefeweizens to Kolsches and Maibochs. Thereâ€™s also the German-style beer from nearby Gloucester called Fishermanâ€™s Navigator. In addition, JW carries the Harpoon 1OO Series. They also also carry 27 bottled beers including the Ayinger Celebrator Doppelbock. You can spend between $3.25 and $7 on a beer, though most fall in somewhere between $5 to $6.

Johnny Blass has been the General Manager of Jacob Wirthâ€™s for six years and he knew going in how important maintaining the history is. â€œI was taking over a Boston institution and maintaining its status. I think if you did a survey around Boston between the ages of 21 to 49 a lot of people might not have heard of Jacob Wirth so part of our job is to bring that clientele in here, which weâ€™ve been successful in doing.â€ As to how that success was achieved, Blass says they got back to basics: â€œWeâ€™ve gone back to what we do â€“ beer. Actually, itâ€™s the beer and having a concept where itâ€™s a relaxed atmosphere, a fun atmosphere and you can walk in here and not feel intimidated about ordering beer,â€ says Blass. â€œObviously we have a German history so we have a lot of German beers that you may not find around Boston. People come here to drink the German beer. I mean thatâ€™s the be all and end all of it.â€ Blass also highlights some other fast moving imports. â€œA lot of the boutique Belgian style ales are very popular right now â€“ Chimay Grande Reserve and Duvel. We also offer craft brewed American beers and we try to support local companies in New England: Harpoon, Sam Adams and Cape Ann Brewing Company. The list is enormous so we canâ€™t support them all but certainly at one point through the year we get to feature some of their beers,â€ he explains. Blass also speaks about the history of the original Jakeâ€™s beer. â€œThey only served two types of beer here back in the day. It was a Jakeâ€™s Dark and a Jakeâ€™s Light. We donâ€™t brew our own beer anymore but they are two of our more popular beers. Our Jakeâ€™s Dark is brewed by Harpoon Brewery; itâ€™s a Munich style dark ale.â€

While I finished up my potato pancakes, Blass filled me in on the cuisine. â€œWe have a section of Jacob Wirth Classics that maintains what weâ€™ve always done. The German food is the most popular stuff. Itâ€™s quite a simple, peasant style food that we have.â€ Among the offerings youâ€™ll find Wiener schnitzel, Jaeger Schnitzel, weisswurst, knockwurst, bratwurst, sauerkraut, red cabbage, and German potato salad. â€œThe other menu is American comfort food. We try and also cook with beer, too, and try to pair beer with food. One thing youâ€™ve got to remember, wine and beer when youâ€™re pairing with food is similar. A lighter style pilsner or lager goes well with whiter style foods,â€ says Blass.

I, of course, had to know what would pair well with Wiener schnitzel and Blass was quick to respond. â€œI would recommend one of our hefeweizens which has got a banana clovey aftertaste and then the lemon in your wiener schnitzel â€“ it compliments them.â€ Blass shared another prime pairing, the Jakeâ€™s Special which is beer-steamed knockwurst served with sauerkraut, German potato salad, and topped with bitter-sweet red beer sauce. â€œThis dishâ€™s recommended beer pairing is the same as whatâ€™s used in the sauce, Sam Adams Boston lager.â€

Another constant of Jacob Wirthâ€™s is the eclectic mix of clientele. From working class to movie stars and politicians, JW plays host to all walks of life so to pick one specific demographic is a foolâ€™s errand. But the topic was an interesting one for Blass to expound upon. â€œWe discuss this almost on a weekly basis. We donâ€™t have a demographic. If you come in here tonight at ten oâ€™clock itâ€™s gonna be full of 2Os and 3Os and if you come in before the shows at 8pm maybe 45 to 6Os.â€ Blass also noted that JWâ€™s prime theater district location also draws a significant crowd depending on what shows are playing. Friday night is sing-along night and youâ€™ll typically find the joint jumping during them. â€œIt can get a bit crazy sometimes. The sing-along used to be 4Os, 5Os, 6Os, now itâ€™s all college age. Itâ€™s loud and itâ€™s just what this place is,â€ says Blass. When I asked if there are steady regulars, all Blass had to do was point over at the bar. â€œSome of them are sitting over there right now. Iâ€™ll have you talk to Bill; heâ€™s been coming here for a few years.â€

Jacob Wirth patron Bill Foley (with yours truly above) resides in the Back Bay and is originally from Dorchester. He was quick with a smile and the shenanigans began post haste. â€œIâ€™m a lawyer and I think youâ€™re gonna need one pretty soon,â€ Foley said to me, claiming I looked like I was looking for trouble. Once I agreed that I indeed was, we got down to business. I tossed him the question of how long has he been coming to Jacob Wirth. â€œIâ€™ve been coming here since the 196Os. When I passed the bar exam my oldest brother took me down here for dinner and Iâ€™ve been coming back here ever since.â€ His reasons are simple and clear. â€œWell, I like the food, itâ€™s reasonably priced. I like the ambience here; thereâ€™s a lot of give and take among the people and nice girls like you come in every once in a while.â€ I knew I had my hands full with this character but I was able to slip in a question about what he likes to drink. His colorful response came as no surprise. â€œI like to have a scotch on occasion. I like Johnny Walker Blue. The first time I ever had the Blue is when I flew on the Concorde back maybe about 7 to 8 years. That was the only scotch they served on the Concorde; Johnny Walker Blue and they gave it to you like they were giving you Diet Coke.â€

Though weâ€™ll all enter through the same doorway, the Jacob Wirth experience can vary greatly depending on who you are, when you go in, and what your disposition is. In my case, it was a much welcomed haven that brought forth a cold pint of German beer paired with an edible gem on a chilly spring Saturday afternoon. But itâ€™s also a place where characters like Bill Foley hold court with their tales, a place where 2O-somethings crowd in on a weekend night, a place where true beer aficionados come to partake of a rare import. Itâ€™s a place where fans of traditional German cuisine and stand-by American classics come to dine and itâ€™s a place where you can expect the unexpected while avoiding mundane disappointment. Jacob Wirth lives in the annals of Boston history while also enjoying present day success. Retirees, hipsters, tourists, and locals alike can all claim it as their own. I shall sign off with a Prussian drinking toast. Hereâ€™s to you Jacob Wirth: KaÃ®ls pas kaÃ®ls aÃ®ns per Ã¢ntran, which translates to, â€œa healthy one after a healthy one, one after anotherâ€!