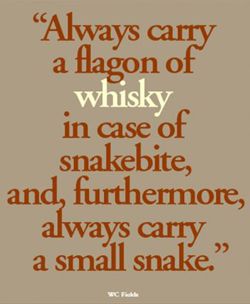 Whiskey.
It’s widely celebrated, commands great respect and continues
to be a wildly popular spirit. For this article I look to
one place by land and, if you will, two if by sea – Canada,
Ireland and Scotland. With glasses raised the questions are:
What’s hot, what’s changing, where is it headed, and who is
drinking whiskey these days? To answer these questions I
spoke to an assortment of individuals who, one way or
another, are in the know when it comes to whiskey. Some
surprising light was shed on who today’s whiskey customer is
and how deep they are willing to delve into their wallets to
enjoy it.

By
the numbers. The stats are in, courtesy of The Distilled
Spirits Council. In general terms, whiskey is again on the
rise, up 1.9% to an impressive 44.7 million cases. As for
revenue, it has increased by 5.5% to $4.6 billion. Single
Malt Scotch is up 8.7% (92O thousand cases). Irish whiskey
is up as well, to 11.5% (558 thousand cases). Canadian
whiskey is up .3% (15.3 million cases). Speaking of Canada,
Crown Royal has had what Brand Manager Jim Lorenz calls
“tremendous growth”. “Growth remains strong at over 7%. We
recently became the second best selling North American
whiskey in the US,” says Lorenz. “The super premium brand,
Crown Royal Special Reserve continues double-digit growth as
well,” he adds. Canadian Club is also recovering after a
stretch of decline or flat performance. “According to the
Nielsen numbers measuring consumption over the past few
months, the brand is growing at a double-digit rate,” says
Jack Shea, PR Director for Allied Domecq. Jameson’s Irish
Whiskey is also racking up some terrific stats. “It’s in its
sixth consecutive double digit year of growth,” adds Jeff
Agdern from Pernod Ricard USA. “We believe we’ve only
scratched the surface of what the potential of the brand is
in the US market, and there are so many people who are not
yet aware of what Jameson is, that making them aware of the
brand and providing them with a fairly rational reason to
try the brand we think could be very effective,” says
Agdern. On a regional level, Jameson’s is running wild.
“Jameson Irish Whiskey is on fire, up 15% in my territory
and double digits around the country,” says Brian Driscoll
who runs New Hampshire, Maine and Vermont for Pernod Ricard
USA. From a retail standpoint, Gary Park, from Chestnut
Hill’s Gary’s Liquors, points out that Crown Royal is still
very successful, and VO and Canadian Club are holding their
own. Park also notes that some of his biggest whiskey
sellers continue to be Jameson’s and Bushmills on the Irish
front, and Glenlivet and Glenfiddich on the Scottish
one.

Poker chips, car
racing and beyond. The sales numbers clearly indicate that
more money is being spent on marketing and advertising, and
these efforts are paying dividends. Take Canadian Club, for
example. They have gotten hip to the nationwide poker craze
and have launched a promotion around it. Canadian Club
recently unveiled its biggest marketing promotion ever: a
national poker program that gives ten winners the chance to
compete in Las Vegas with Chris Moneymaker, a World Series
of Poker champion, for the multi-million dollar purse. No
pressure or anything! CC’s calling it “Dealing up a Smoother
Night”, and it includes thousands of both on- and
off-premise promotions which are meant to help keep its
drinkers stay smooth as they try to win big. Canadian Club
read the tea leaves back in 2OO1 and saw that poker was
destined for major mainstream attention.

Ballantine’s
Scotch also got in on the action as they launched 17- and
2O-year-old blends last year. Both of these have done
extremely well in Asian markets, particularly Japan and
Korea. Therefore the initial target was Korean-American
communities in California, New York and New Jersey.
Ballantine’s has used the slogan “We’ve Arrived” in
full-page color ads taken out in Korean-American
publications. The 17-year-old Scotch has a suggested retail
price of $129.99, while the 3O-year-old variety will set a
person back just under four hundred dollars. One can only
imagine that George Ballantine, who began his quest for the
perfect Scotch back in 1865, is grinning from the grave. For
his efforts, Ballantine’s is the # 3 Scotch-whiskey in the
world. Crown Royal is also no stranger to marketing savvy.
They have a new sponsorship with Rousch Racing and the
Nextel Cup Champion Kurt Busch this season. NASCAR fans have
huge numbers and Jim Lorenz realizes this is a chance to
reach a large audience. Crown Royal is also sponsoring P
Diddy’s Bad Boys of Comedy Tour. However, word of mouth
continues to be something Crown Royal banks on. “Nothing is
more powerful than a recommendation from a friend,” says Jim
Lorenz.

Jeff Agdern says
that with regard to Jameson’s, they’ve launched a campaign
that simply focuses on all the potential reasons why people
might like the Jameson brand. “It is just a whiskey that
tastes good,” he says. Furthermore he is well aware that
anything Irish continues to be extremely hip. “There’s a lot
of really positive aspects that continue to come from
Ireland,” he says. The number of Irish pubs in the Boston
area alone speaks volumes as to how Irish culture has become
a permanent fixture. There is also emphasis being put on
consumer and bartending education on the mixability of
Jameson’s. “The Jameson & Ginger Ale has been taking off
and is basic and delicious,” says Brian Driscoll.

At
a retail level, sometimes something as simple as holding a
tasting event can be a relatively easy way to boost sales.
“Last holidays Johnny Walker came in and did a tasting with
the Gold that was very successful,”says Gary’s Liquors’ Gary
Park. Furthermore, Park isn’t afraid to promote the larger
size bottles of Irish Whiskey. “You can definitely hone in
on those consumers if you focus. In almost every one of our
ads we feature an Irish Whiskey, and not just on St.
Patrick’s Day.” Perhaps the most extreme example of how
simple advertising can rally pay off occurred last winter.
“We sold a $25OO bottle of Macallan. I put an ad in, it was
more like a piece that people would come in and look at or
see in my ad and go ‘wow’. Someone did more than say wow.”
Would you believe that somebody marched right into Park’s
store and bought it? You just never know – sometimes taking
a risk is very worthwhile. The lesson learned here for other
store owners is a simple but powerful one: Stock it,
advertise it, take a few chances, and see what
happens.

Youthful trends.
It would appear that consumers are reaching deeper into
their pockets to enjoy more premium brands. “Consumers’
willingness to enjoy more flavor in mixed drinks is another
trend that will benefit the brand,” says Jim Lorenz of Crown
Royal. “The consumer trend toward drinking premium spirits –
which started first with white spirits – has now extended to
brown spirits as well. This bodes well for premium spirits
like Canadian Club and Ballantine’s,” says Jack Shea.
Jameson Irish Whiskey is also enjoying a surge. “It’s
trending at about 18%,” says Jeff Agdern. With the advent of
marketing endeavors decidedly aimed at a younger
demographic, the age of some whiskey drinkers is starting to
drop. “Canadian Club’s core consumer group remains men over
4O, but the brand has a growing following among 21- to 29
year-old men, thanks in part to marketing programs like
poker aimed at making the brand more relevant with that age
group,” explains Jack Shea. The same could be said for
Jameson’s. “Historically, Jameson was a brand for the older
Irish immigrant and now most of our volume comes from the
LDA (legal drinking age) to 35-year-old so it is really
being driven by the younger spirits consumer who is
interested in premium brands that are flavorful but still
not unapproachable,” explains Jeff Agdern. “Cutty (Sark) is
actually starting to turn towards a younger crowd,” notes
Gary Park.

Again, the fact
that all things Irish are turning to gold is only helping
matters. “I certainly think that Jameson’s consumer is a
younger consumer than that of Scotch at present. Irish
Whiskey is really a cool thing right now,” notes Pernod’s
Brian Driscoll. Eryl Williams, a bartender at Laurel Grill
& Bar in Boston’s South End, also testifies to the age
of whiskey drinkers, particularly when it comes to one of
his favorite drinks: the Manhattan. “A younger crowd is
really getting into them; trying them and liking them. It’s
a natural progression from martinis and cosmopolitans. After
the fun drinks they tend to turn to more classical drinks
and are willing to try the fruity ones,” says Williams.
Williams points out that the VO Old Fashioned and the
Dewar’s Rob Roy are also quite popular with the younger set
who is willing to pay for a good drink. “They are looking
for quality rather than quantity and are willing to pay a
premium for it,” says Williams. There is no denying that
Generation Y has developed a more sophisticated taste and
will pay to indulge it.

Where is whiskey
headed? So what does the future hold for our three
countries? Look for more marketing campaigns like the poker
one &endash; and for a wider net to be cast. Whiskey
consumption is on the rise, and this goes far beyond just
the Irish variety. Consumers are willing to pay more to get
what they want. “Prices continue to go up and people
continue to stay with it,” says Gary Park. From the Canadian
point of view, Crown Royal brand manager Jim Lorenz says
that the future shines brightly. “Canadian whiskey is a
great category to compete in. These brands offer great taste
and versatility that is hard to come by in other whiskies. I
see great opportunities for the category and the brand going
forward.” The general consensus among everyone I spoke to is
that whiskey numbers are only going to rise as the younger
drinker continues to get on board with it and as people
become more educated about whiskey and come to appreciate
all that it has to offer in terms of variety of tastes and
ways it can be enjoyed.

There really is
no stereotypical whiskey drinker anymore; the field is wide
open. Men and women of all ages and all walks of life are
enamored with their favorite whiskey – and favorite whiskey
drink. Whether it be neat, on the rocks or mixed into one of
Eryl William’s magical Manhattans, whiskey has one foot in
its storied past and another one in its monumental future.
Although the younger crowd is very much a big part of the
whiskey picture, be sure to save a seat at the bar for Aunt
Edmee and her posse.